The launch of Ann Cleeves new book Silent Voices took place on Monday 28 February at the October Gallery in Central London. Amongst those to join Ann were Brenda Blethyn OBE (who is soon to be seen as Vera, in the ITV adaptation of Ann’s Vera Stanhope police procedurals), the editorial team from SHOTS, Michael Carlson, Chris Simmons from Crimesquad, Barry Forshaw, NJ Cooper and TV director Peter Hoar. Goldsboro Books provided the hardback editions for signing. 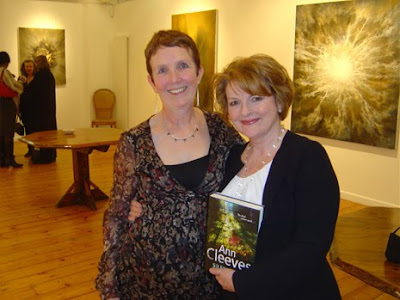 Ann’s publisher Pan Macmillan provided various cheeses, biscuits and gin from the Wylam Brewery Ltd. Which went down rather well and if you want to know more email: admin@wylambrewery.co.uk. We were also treated to music from Ribbon Road a Northumberland folk band.

After a short introduction from Macmillan editor Julie Crisp, Ann read a brief passage from Silent Voices. Having whetted out appetite we were led back into the main gallery for a sneak (but short) preview to the opening sequence of Vera which is slated for transmission on ITV in May 2011.

Ann said of the adaptation: “I’m absolutely delighted. It’s a really good script and the director has kept the spirit of my central character.
“We were determined it was filmed in the North East because it’s important for the filming and cultural scene in the region.
“A couple of scenes are filmed in Whitley Bay and I hope it will provide work for the local people.
“It’s fantastic to have Brenda Blethyn involved too. We also have a very good director.
“I’ve been writing for 20 years and it’s great that after all that time there is now this success.”

To view more of the photos taken that night, click here:

Julie Armstrong (Gina McKee) arrives home from a rare night out in Newcastle with boyfriend Gary Wright (Neil Armstrong) to find her son murdered. Luke (Sam Fender) has been strangled, laid out in a bath of water and covered with wild flowers while his sister, Laura (Gabrielle Ross), sleeps silently in the house. This stylised murder scene has Chief Inspector Vera Stanhope (Brenda Blethyn) and Sergeant Joe Ashworth (David Leon) intrigued. A second body of beautiful young teacher Lily Marsh (Samantha Neale) is discovered laid out in a rock pool, the water strewn with flowers.

Vera must work quickly to find the killer who is making art out of death. Clues are slow to emerge from those who had known Luke and Lily, but Vera soon finds herself drawn towards a curious group of friends who discovered Lily's body.
As local residents are forced to share their private lives and those of their loved ones, sinister secrets are slowly unearthed. And all the while the killer remains in their midst, waiting for an opportunity to prepare another beautiful, watery grave.

VERA also stars Wunmi Mosaku as DC Holly, Paul Ritter as a Forensic Pathologist Billy Cartwright, Juliet Aubrey and Murray Head as Peter and Felicity Calvert, Patrick Toomey as Samuel Parr, Paul Higgins as Clive Stringer and Colin Conway as Davy Sharp.
Filming for the 120 minute drama was shot on location in Newcastle and Northumberland. VERA is a compelling, character driven crime drama. The script, which is based on the book Hidden Depths, has been adapted by Paul Rutman who has written for Marple and Lewis.