Sophie Hannah's Point of Rescue comes to the small screen 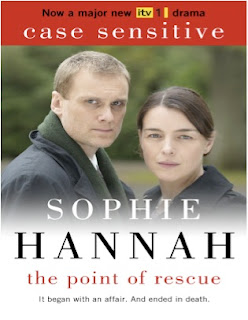 Hodder and Stoughton arranged for a preview screening of the ITV commissioned two part drama based on a novel by the award-winning author Sophie Hannah.
The two-part drama, Case Sensitive, is based on the highly acclaimed and chilling psychological suspense novel Point of Rescue from Sophie Hannah.

Case Sensitive is a story, which explores themes of identity, guilt and family strife. The 2 x 60 min drama has been adapted for ITV by Hat Trick Productions.

When Geraldine Bretherick and her 5-year-old daughter Lucy are found dead in the bathroom of their luxury home, the case divides new DS Charlie Zailer and her DC Simon Waterhouse. Is it murder, suicide or something even more sinister, and how watertight is the alibi of the husband Mark?

Meanwhile, when Sally Thorne, a working mother with a husband and two young children, hears of the deaths, she is shocked and appalled. Months before she'd met a man called Mark Bretherick at a hotel and had a brief but passionate affair with him. Now she feels the need to get in touch with him again to offer her sympathy. Her friend Esther does not think this is very wise.

ITV ‘s two-part dramatisation of Point of Rescue will be broadcast on May 2nd & 3rd under the series title Case Sensitive.

The adaptation is excellent and well worth seeing. There are some stunning performances from all the cast but especially from Olivia Williams who plays DS Charlie Zailer and Amy Beth Hayes. Case Sensitive was directed by Charles Martin who has directed such programmes such as Skins and Being Human.

Case Sensitive is certainly worth not only sitting down to watch but also taping. BBC Worldwide are responsible for international distribution.