Launch of The Watermen by Patrick Easter 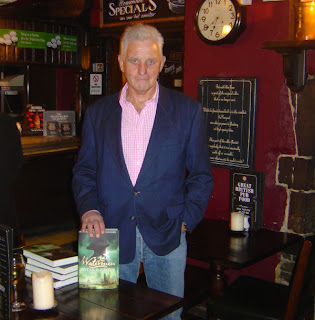 Quercus pushed the boat out to launch a new historical series by ex-policeman Patrick Easter in the appropriate surroundings of The Prospect of Whitby - a pub in London's once-notorious area of Wapping.
This new series of books introduces the character of Tom Pascoe, a River Surveyor with the Marine Police in the Port of London at the end of the 18th Century and deals with its first six months of existence.
At the tender age of 19 Patrick joined the Metropolitan Police in London and three years later went onto the river. On leaving the police service in 1994, Patrick became a journalist chasing deadlines for technical magazines and articles in national newspaper. The Watermen (pub 31/03/2011 Quercus) is his first novel.
Those supporting the launch included Marcel Berlins (The Times), Barry Forshaw (Crime Time), Chris Simmons (Crimesquad), Mark Sanderson (The Evening Standard), Jane Wood (Patrick's editor), Lucy Ramsey, Ron Beard - all from Quercus Publishers, Laura Wilson (The Guardian), Ayo Onatade and Mike Stotter of SHOTS, and agent Oliver Munson of Blake Friedman. The event will also be reported in The East End Advertiser nearer the publication date.
Photos taken that night can be see in the PHOTO GALLERY.
Posted by Mike Stotter at 22:06