OK a bit of self promotion here, but in my defence, it is crime fiction related. My latest anthology, SIX RED HERRINGS is now available from Lulu - either as paperback or downloadable. 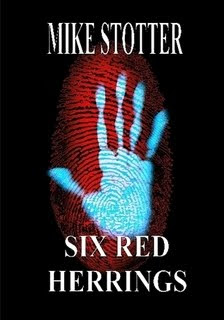 “Crime has been with us ever since the dawn of time. This unputdownable new anthology from Mike Stotter presents six stories of murder, mystery and intrigue. Stories taken from historical Jacobean London to the mean streets of the East End, a boy lost in the jungle to a girl lost in the world of night clubbing and drugs, a very English murder in the library to a dystopian view of the future. Six Red Herrings is a fast paced anthology that will have you entertained every step of the way.”
It was great putting this together as it allowed me to go back and revisit some of the previously published stories and tinker with them. And I must say I cringed a little at the earlier stuff. I did this with the western stories in Six Trails West. Get the idea that a theme is emerging here?
Here is the direct link to Lulu.
http://www.lulu.com/product/paperback/six-red-herrings/15128810
Posted by Mike Stotter at 17:18