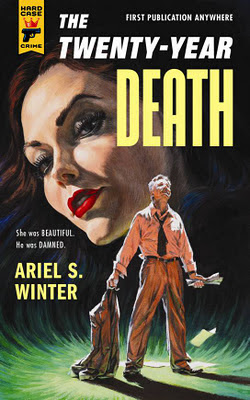 We’ve been following US based Hard Case Crime transfer over to British Titan Books with excitement. What we love about this imprint from Charles Ardai is his enthusiasm for the crime fiction genre. As book reviewers we are always on the lookout for that ‘fresh book’, something ‘different’. You will recall how excited we were when Stieg Larsson entered the genre with The Girl With The Dragon Tattoo, and it was Shots and The Rapsheet who were first in realising that the Lisabeth Salander novels were something special.

I was fortunate to have dinner with Charles Ardai and his wonderful wife, Novelist Naomi Novik at the Shamus Awards during Bouchercon Baltimore 2008, and we have stayed in touch ever since. I am always delighted when Charles emails me, and this time. I’m intrigued, so from the desk of Charles Ardai, let me pass some interesting information about an upcoming release that sounds intriguing -

We just added a new book to the Hard Case Crime Web site, a first novel by a young Baltimore-based writer named Ariel S. Winter that we’ll be publishing next summer. It’s not the sort of book that generally attracts a lot of coverage merely as a result of being announced – obviously no one knows the author’s name yet, since he hasn’t published any books before. The main thing it does have going for it is that it’s an amazing, amazing book – one that really knocked my socks off – but that’s something no one else will appreciate until they actually get to read it, which is months away.

There is another story here, which is the book’s very unusual structure. The book is called THE TWENTY-YEAR DEATH, and it’s the story of a husband and wife whose lives collapse as violence intrudes – not an unusual premise for a noir novel. But the form Winter chose for it is very unusual: he decided to tell the story of these two doomed characters in the form of three separate old-fashioned crime novels, each set in a different decade and written in the style of one of the iconic mystery writers of that time. It feels a little like opening a Christmas package and finding new novels by three of your favorite pulp-era crime writers. The first is set in 1931 and features a French police inspector investigating the death of a convict in a rain gutter 20 miles away from the prison where he was supposed to be serving a 40-year jail sentence. The second is set in 1941 and features a hardboiled private eye in Hollywood who is hired by one of the big movie studios to watch over one of their leading ladies, who either is showing signs of paranoid dementia or is actually being stalked by a mysterious man on the set of her new picture. And the third is set in 1951 and puts us deep inside the dark and troubled mind of a desperate man, a drunken writer who has lost almost everything he had and is about to tip over the edge separating ‘troubled’ from ‘dangerous.’

What’s more, these aren’t just pastiches – what's wonderful is that each book works not only as a tribute to a great mystery writer of the past but also as a standalone novel with substance and emotional heft, and as part of the combined larger whole. It’s fascinating, for instance, to watch a background character in the first book become a more central figure in the second and then the first-person narrator in the third. I don’t know any other book that’s ever done anything like it.

In any event…I fell in love with the book, and bought it even though it’s three times the length of our usual books (by far the longest book we’ve ever published – 180,000 words), and even though you’re always told, as a publisher, that first novels don’t sell. I did it because it’s a stunning performance and just left me grinning the widest grin I’ve had on my face for a long, long time.

For more great books to keep you going until Winter’s Death comes out – from Hard Case Crime – Click Here
Posted by Ali Karim at 11:56