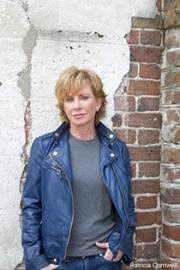 In partnership with
Barceló Majestic Hotel

The Theakstons Old Peculier Crime Writing Festival is proud to present a very special one-off event – An Evening with Patricia Cornwell.
The internationally bestselling author of the Dr. Kay Scarpetta series will appear live at the Barceló Majestic Hotel, Harrogate on Saturday 26th November 2011, 7.30pm for her only UK event outside London this year.

Patricia Cornwell will be talking to BBC Radio Four’s Mark Lawson about her extraordinary career, and the inside story on her eagerly anticipated new novel, Red Mist, released on 24th November.

Patricia Cornwell said: "Harrogate - the home of UK crime writing - is the perfect place to share what it's like diving into the mind and world of Kay Scarpetta."

Simon Theakston, Executive Director of T&R Theakston, said: “It is real coup to have the opportunity with this special event to add Patricia Cornwell to the list of world-class crime writers that have appeared in Harrogate as part of the Theakstons Old Peculier Crime Writing Festival.

Patricia Cornwell is one of the world’s major international bestselling authors and we are honoured and excited to welcome such a global name to Harrogate and particularly to have the privilege to host Patricia in her only UK event outside of London this year.”

Tickets for the event are priced at £10.00 and are available now via the Ticket Hotline on 01423 562303 and online at www.harrogate-festival.org.uk/crime
Copies of Cornwell’s new book Red Mist will be available to purchase on the evening, courtesy of Waterstone’s, and Patricia Cornwell will be available after the event to sign books purchased.

For press passes or further information please contact Gemma Rowland,
Festivals Co-ordinator on 01423 562303 / gemma@harrogate-festival.org.uk
--ENDS—
Notes to editors
1. Venue Information:The event will take place on Saturday 26 November at the Barceló Majestic Hotel, Springfield Avenue, Harrogate, HG1 2HU. Doors will open at 7.00pm and the event will begin at 7.30pm, set to last approximately one hour. The Barcelo Majestic Hotel has 250 parking spaces, for which use the hotel levies a £3.50 charge. Free on-street parking is available on streets nearby from 6pm.
2. Tickets:The ticket hotline is open Mon-Fri, 9.30am-5.30pm and Sat, 10am-4pm. Please note: There is a £1.50 booking fee per transaction for all telephone bookings. Online bookings are subject to a 10% charge from the service provider, We Got Tickets.
3. About Patricia Cornwell: Patricia Cornwell is one of the world’s major international best-selling authors having sold over 100,000,000 books globally and translated into thirty-six languages across more than fifty countries. She is a founder of the Virginia Institute of Forensic Science and Medicine, a founding member of the National Forensic Academy, a member of the New York OCME Forensic Sciences Training Program’s Advisory Board, and a member of the Harvard-affiliated McLean Hospital’s National Council, where she is an advocate for psychiatric research.

In 2008 Cornwell won the Galaxy British Book Awards’ Books Direct Crime Thriller of the Year – the first American ever to win this prestigious award. Her most recent bestsellers include Scarpetta, Book of the Dead and The Front. Her earlier works include Postmortem – the only novel to win five major crime awards in a single year – and Cruel and Unusual, which won the coveted Gold Dagger award in 1993. Dr. Kay Scarpetta herself won the 1999 Sherlock Award for the best detective created by an American writer.
Patricia Cornwell’s remarkable nineteenth novel Red Mist, featuring chief medical examiner Dr. Kay Scarpetta, will be published in the UK on 24 November 2011 by Little, Brown Book Group.

4. About the Festival:The Theakstons Old Peculier Crime Writing Festival is Europe’s largest event dedicated to the celebration of crime fiction. Taking place annually over four days each July (19 - 22 July 2012), the Festival programmes over 70 best-selling UK and international crime authors and over 20 events. It is promoted by the north of England’s leading arts festival organisation, Harrogate International Festivals. It is ranked in the top three best literary festivals in the UK (Guardian), and number 34 in the Independent’s ‘The 50 Best Festivals’.
5. About Theakstons:Title sponsor of the Crime Writing Festival since 2005, Theakstons Old Peculier ale is produced by T & R Theakston Ltd. It is one of the country’s most famous and highly regarded traditional ale brewers. Theakstons was established in Masham, North Yorkshire in 1827 by Robert Theakston. After a brief period in the 1980s when the company was acquired by Scottish & Newcastle plc, the company has been back under family ownership since Autumn 2003. It now operates as an independent brewer producing five permanent brands in the Theakstons range including the iconic Old Peculier – its best-known beer with a rich, dark flavour, celebrated by ale enthusiasts all over Britain and around the world.
Posted by Ayo Onatade at 09:55