Anna Smith talks about To Tell The Truth 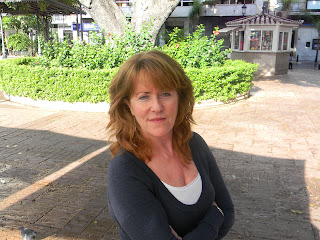 Today’s guest blog post is from Anna Smith who has been a journalist for other twenty years and who is a former chief reporter for the Daily Record in Glasgow. She has covered wars across the world as well as major investigations and news stories from Dunblane to Kosovo to 9/11. She writes a regular newspaper column in the News of The World with a readership of more than a million in Scotland alone. To Tell The Truth is her second novel. Her first crime novel to feature Rosie Gilmour The Dead Won’t Sleep was published last year.

If you embark on a novel where the main thrust of the plot is the kidnapping of a little girl while on holiday in Spain with her parents, you’d better be braced for the obvious questions. Of course, in my novel To Tell The Truth, there will be comparisons made to the kidnapping of Madeleine McCann – it was, and still is one of the biggest stories on the agenda for most of the media. But as a frontline former daily newspaper journalist who has never shied away from any challenge, I’m a firm believer that an author should be free to write about any subject they wish.
Real life events have triggered fiction form the beginning of time.

But in fact I had a very clear picture in my mind who my main characters were – and they bear no resemblance to anyone in real life. I wanted to create a set of circumstances that would enable a child to be kidnapped and also to look at the aspect of guilt. But that isn’t the only reason why I pursued the storyline of child kidnapping.

I did it because I wanted to write a novel where searing guilt was at the heart of the story, and where I could illustrate how a moment of recklessness can wreck so many people’s lives. And I also did it, because I wanted to put a spotlight on the most sickening scourge in the world we live in today - child porn and people trafficking, where the most vulnerable people are at the mercy of ruthless gangsters and perverts. My new novel is the second in the series featuring Glasgow journalist Rosie Gilmour, following on from the debut thriller last year, The Dead Won’t Sleep.

The new book sees Rosie sent on the massive kidnapping story while she is on holiday in Spain. To Tell The Truth is, by the very nature of the title, a story of people who cannot afford to tell the truth of what happened and what they were doing when a three-year-old girl gets kidnapped from a beach in broad daylight while on holiday with her parents. The mother cannot tell the truth because of what she was doing, and the only people who witnessed the crime cannot tell the truth because of who they are.

Of course, I considered the sensitivity of the subject matter, as I’ve always been, and still am, a huge supporter of the McCanns. Indeed, when I was a columnist with the Sunday Mirror and News Of the World, I strongly criticised the shabby way they were treated by the Portuguese authorities investigating the case. But the sensitivity didn’t hold me back from my story.
In fact, as much thought went into the creating of the character who kidnapped the child, as it did when crafting the other characters. I wanted to give the kidnapper a backstory. I didn’t want him to be someone who steps from the shadows and randomly steals a child. I wanted him to have a story and to develop - and the biggest task of all was to see if I could create any kind of empathy at all with a character like that. And I wanted to create a reason why this particular child was kidnapped.

My publishers Quercus held the launch for me in Glasgow’s Sauchiehall Street branch Watersones last week, and it went down a storm. Having spent a lifetime in journalism I’m fortunate and also grateful to have the continued friendship and respect of others in the industry who always turn out to support me on my book launches. They did it last year and we all shared a glass of wine and an attempt to catch up on each other’s lives before I signed copies for the queue that snaked from the basement almost to the first floor! When I made my little speech at the beginning, I talked of the huge support of friends and family, and without wanting to gush like someone on a reality show – I cannot emphasise how central that support is to my life.

I grew up in a former mining village in Lanarkshire where despite all the social problems in the present climate, there is still a strong sense of community and family. People I’ve known all my life, and some I barely know, all turn up to buy my book and wait in the queue to get it signed. I continue to be genuinely touched and moved by that level of generosity, and I would never take it for granted. Book launches for me are great fun – once the official bit is over and we can all have a few drinks.

Next up, is the rather sumptuous Stena Line ferry from Cairnryan to Belfast and then a long drive to the West of Ireland. The people in the remote villages where my house stands just a stroll to the wildness of the Atlantic, have made me so welcome and give me a great sense of family, even when I’m away from my own back in Scotland.

We had a great launch there last year for The Dead Won’t Sleep, first in the Dingle Bookshop and then back at TP’s pub – my local in Ballydavid, and renowned throughout the west as one of the best places in Ireland for the craic. This year, the launch will be March 16 - the night before St Patrick’s Day, so we’re hoping for a good crowd and that it turns into a bit of a night back at TP’s.

Then it’s onto Spain, where I did a small launch of the mass market paperback in November and to my astonishment the pub there was packed out with ex-pats from the Costa del Sol who love a good crime story! We’re hoping for a big crowd this time in the Mijas Playa restaurant in the little gem of a village called La Cala de Mijas, where again people have made me really welcome.
Actually it was while in La Cala, walking on the beach that I first got the inspiration to write To Tell The Truth, and even as I walk there I can still see the story unfolding in front of my eyes.

Now, I’m on book three in the Rosie Gilmour series. It’s called Refuge and is a story of refugees in Glasgow in the late 1990s, set in the city and also in Bosnia and Kosovo. I have almost finished it – hoping that I can take Rosie once again out of Glasgow and use my journalistic experience covering wars and conflicts across the world, to help give her stories an international appeal.

Kirstie Long’s review of To Tell The Truth can be read on the Shots Ezine website.
Posted by Ayo Onatade at 13:00