Today's guest blogger is James Craig who was born in Scotland. A former journalist and TV producer he has lived in London for over 30 years. He is the author(so far) of two books in the John Carlyle series. His character owes much to two Italian police detectives Venetian Guido Brunetti and Sicilian Salvo Montalbano. He talks about launching a new detective series, marketing and e-books.


February sees the formal launch of the paperback version of Never Apologise, Never Explain. The digital edition of the book has already been on sale since Christmas. Increasingly, digital considerations are dominating the production and marketing schedules. With Amazon selling 4 million kindles in December that is not really so surprising.
In terms of the book itself, the plot revolves around the killing of an elderly woman called Agatha Mills. It looks like a simple domestic argument gone too far; there is only one suspect – her husband Henry. For Inspector John Carlyle, it looks like welcome a chance for a quick win. But, much to the Inspector’s annoyance, Henry refuses to confess. Worse, he comes up with an alternative version of events that is almost impossible to investigate. When a distraught Henry kills himself on the way to prison, doubts begin to surface. Slowly, Carlyle has to face up to the fact that the man may just have been telling the truth.
The trail leads all the way back to the murder of a Catholic priest on the other side of the world and a family’s forty-year fight for justice. Carlyle sets off on an investigation that spirals out of control as he uncovers a killer stalking the streets of London. How much more blood will have to be spilt before the past can be put to rest?
So far, so good.
But are people reading it on their shiny new Kindles? Happily, yes.
What we’re selling here is contemporary crime fiction; Carlyle is a new character from a new crime writer so it aims to do what it says on the tin, if a potential reader checks it out and reads it on the basis of the blurb at the back the hope is that they won’t feel short-changed.Even better, they will like it enough to check out the next one.
Never Apologise, Never Explain is the second in a series featuring Inspector John Carlyle, working out of Charing Cross police station in central London. The first book, “London Calling”, was published in 2011.
I don’t know the precise numbers but, overall, the vast majority of my sales are digital.
Is that an issue? No.
How people consume the novel matters not a jot – you have to get the product (the book) to people in the way they want it. If you can do that, then it’s a question of getting the pricing right to that everyone – in no particular order the vendor, the publisher, my agent, my SEO guy and me - is kept happy. 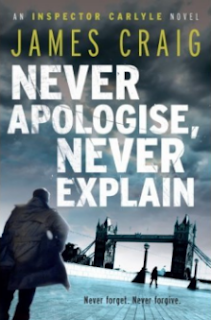 The e-book edition ofLondon Callingwas published ahead of the paperback edition in June last year. This was about profile-raising as well as sales. When it reached #1 on the kindle chart (for an hour!) the strapline “the No.1 e-book bestseller” was added to the paperback before that went on sale August.

The Kindle launch was the (very good) idea of Rob Nichols, the Marketing & Digital at my publisher, Constable & Robinson. The other smart thing that he did was price it at a quid, so that it would be competitive with other titles hovering around the top of the kindle lists.
Another great thing that Rob did was hook me up with Chris McVeigh at 451. Chris is a publishing and a social media expert and he has been driving the online marketing for both the first and second books.
It is an interesting time to be a new(ish) writer in the publishing business – the world is clearly changing, so my complete lack of experience is not necessarily as much of a handicap as it might previously have been. I have been extremely lucky to hook up with people who understand both the old and new worlds and are hugely enthusiastic and innovative. 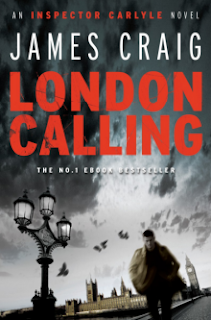 I have stirred the pot occasionally, with book competitions on Twitter and promo videos to provide some more content. However, I would say that all of the success on kindle has been down to Rob and Chris. Rob had the foresight to try it and is constantly working on the marketing. And Chris has the skills and experience to make the most of what C&R are doing.
The key thing remains to get the books out there and get some awareness and reaction. As you can see from the Amazon reviews to London Calling, not everyone is going to love it but, ultimately, there's no such thing as bad publicity.
So far, the whole thing has worked quite well. For the first couple of days, you get addicted to rankings (it’s gone up to 56, hooray!; shit, it’s down to 82, what’s going on?) then you kind of settle down into making sure you engage with the potential readership and make sure that people who are reading similar titles get to know about your book.
In the first month, we sold 15,000 copies ofLondon Callingon Kindle. This gets you in front of the trade as well as the reader. It gave book buyers a certain level of comfort as they calculated their advance orders. It also helped sell the rights for the first two books in Germany – the German translation of London Calling will be published in May.
Like others, we are seeing that if you can demonstrate good sales figures more deals will follow.
So, what next? The plan remains to make sure that we try and put in the right effort in the right places at the right time. Rob got Never Apologise, Never Explain into Amazon’s Christmas promotion and when it went into the top 100, London Calling followed it back in.
Digital is also impacting the print publication strategy, leading to shorter time gaps between titles. Book number three, Buckingham Palace Blues, which has Carlyle hunting down child traffickers, should be out later in the year. Number four should be out next year.
The online world never stops. Better stop surfing and get writing.
Find out more at