I’ve enjoyed Simon Kernick’s crime and thrillers for over a decade now, being energized by his early police procedurals featuring corrupt cop [turned hit-man] Dennis Milne. Simon debuted with ‘The Business of Dying’ in 1991, and followed up his furious London-based police action with The Murder Exchange, A Good Day to Die and The Crime Trade. I always wonder where the time went, as I recall vividly going to my first Bouchercon in 2003 with Simon in Las Vegas. We also went, with Sarah Weinman to the very first Harrogate crime writing festival in the same year. We found time to record a lengthy interview with Paul Johnston at the last Dead-on-Deansgate Crime Convention, meet up and interviewed Lawrence Block when he was presented with the Diamond Dagger Award by the British Crime Writers Association. We even went to a waste oil recycling plant in the East End of London. Our visit to this industrial plant was integral to the plot of one of his novels. During the visit, the hard-man of crime fiction felt somewhat queasy due to the pervading stench produced in the chemical process.

Simon changed writing direction radically in 2007 turning his hand away from the police procedural into thriller territory, with Relentless, a novel printed on solidified adrenaline. It was greeted to great acclaim winning the Richard and Judy Award in 2007, other winners in the crime and thriller category have been R J Ellory [A Quiet Belief in Angels], Linwood Barclay [No Time for Goodbye], Gregg Hurwitz [You’re Next] among others. The Richard and Judy Award in the is akin to the Oprah Winfrey Book Club awards.

So while at Harrogate earlier this year I got talking to Simon asking when would his thrillers finally surface in US; as several of my American colleagues were asking when they could access these titles, so I asked Simon to let us know -

Relentless, which is released on ebook in the on September 18th at a special introductory price of $2.99, is my fifth novel, and my first one published in the States for seven years. I’ve recently signed a four book deal with Simon & Schuster, which will see Relentless and The Last Ten Seconds out in ebook this year, before my latest, Siege, is released in paperback next spring.

And I’ve got to say, after all this time it’s good to be back. I’ve still got a lot of readers and friends in the from the time when my early books were published, and I’m looking forward to renewing acquaintances. I’ve also had a huge amount of encouragement from American writers like Harlan Coben and Lee Child, who’ve said some really nice things about my work, so I’m hoping to reach a lot more people with the books this time round.
Relentless is a good great one to be starting with too, as it was my breakout book. To date it’s sold over 400,000 copies in the , and 300,000 more copies overseas. It’s a high-octane, twisting and turning, thriller about an ordinary suburban man, Tom Meron, who suddenly finds himself on the run from a group of ruthless killers. With his wife missing, and wanted for murder, Tom only has hours to find out why he’s being targeted before his luck runs out.
Take a look at it. I promise you won’t be disappointed. 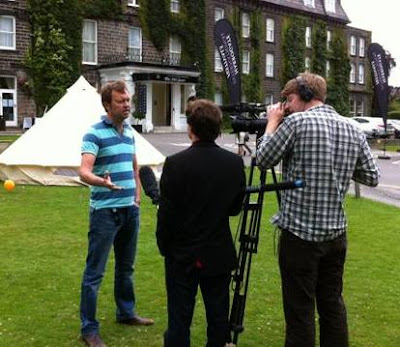 Following Relentless, he continued his thriller theme with Severed which was based upon a nightmare Kernick suffered, which he detailed here. Long known for his late nights and drinking, one night when , Micheal Marshall, Simon Kernick and I were drinking late at the opening party on Thursday at Crimefest 2008; at 4am Friday Morning, the Shots Editor-in–Chief asked if [when Simon had the nightmare that lead to the plot of Relentless] he had wet his bed? We all roared laughing, especially Simon, as he has very good sense of humour, something he deploys to bring relief to the unbearable tension he ratchets up in this thriller novels.

Though full of life and fun, Simon Kernick takes his writing very seriously, and is on the board at The Crime Writers Association and always working hard promoting literacy.

I urge you to explore the threatening world of Simon Kernick’s thrillers now that they are available in the US in eBook editions.