The Rules For Eight Perfect Murders 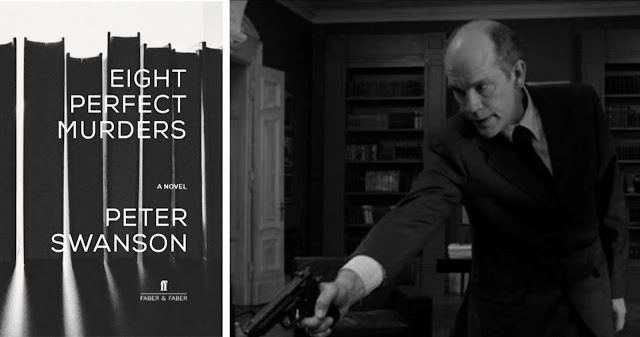 With the 2019 Theakstons Crime Writing Festival, almost upon us I started to think about the allure of crime and thriller fiction, becoming the biggest selling genre in UK fiction publishing. Crime and thriller narratives deal with the darkest areas of the human experience – namely murder, so why the appeal?

While enjoying an early preview of Peter Swanson’s 2020 novel, thanks to John Grindrod writer and marketeer at iconic British Publisher Faber and Faber - we got into discussion about Murder, and its appeal to readers as well as film viewers. Some would consider it amoral to read about the killing of others, so why do so many read about these fictions? Surely the world is filled with enough real-life horror and murder without writers [and their publishing entourage] having to conjure up killings for the amusement of others?

One reason for the appeal of reading about fictional murder, is just that – it is a fiction; an escape from the reality of the human situation, where murders actually happen around us, viewed on our flat screens and in our palms, via our Television sets, our phones and in our newsprint. The novels that fictionalise murder can be an escape, a comfort from the harsh reality that surrounds us; as well as helping us understand the motivations and situations that can arise, leading to a killing. 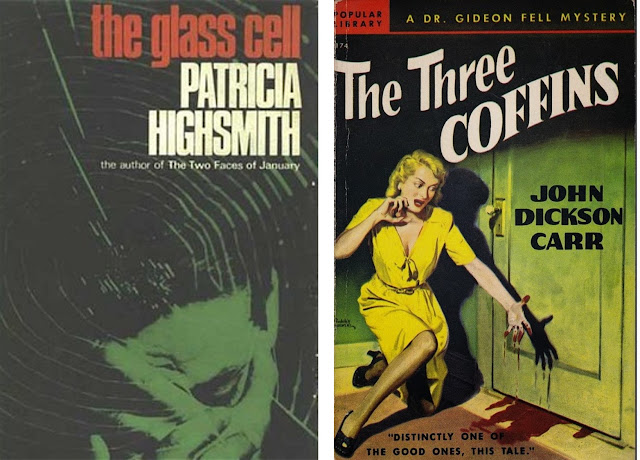 Of course we could discuss the perfect murder at the centre of Highsmith’s debut STRANGERS ON A TRAIN or the antics of Tom Ripley in THE TALENTED MR RIPLEY [and the further ‘adventures’ of this interesting character] but instead I’ll pick 1964’s THE GLASS CELL, a tough little novel that details the murder of a lawyer, by an educated and cultured man - wrongly imprisoned for fraud. Incarceration and torture in a penitentiary changes Philip Carter. The Glass Cell shares themes from Fyodor Dostoevsky’s CRIME AND PUNISHMENT, but is not judgmental as to the actions of its protagonist; so typical of Patricia Highsmith’s work, she once proclaimed “I don’t think my books should be in prison libraries.”

With an interesting body of work, it is Levin’s thought-provoking debut 1953’s A KISS BEFORE DYING, awarded the Edgar from the Mystery Writer’s of America [MWA] that is my selection. It details the ruthless pursuit of ambition that powers Bud Corliss to commit murder. Filmed twice in America, its plot was reworked later in Bollywood. Levin’s debut is a disturbing look at what naked (and unrestrained) ambition can do, and how it can overcome all things, including taking the life of another person in the ruthless pursuit of a goal.

It would be the escape of Dr Hannibal Lecter from his holding cell in Baltimore that would give the 1988 novel THE SILENCE OF THE LAMBS a perfect murder, a bloody locked-room mystery that claimed the life of two prison guards [filmed with panache in 1991].
Many literary commentators have remarked that Thomas Harris’ Dr Hannibal Lecter’s precursor was Patricia Highsmith’s Tom Ripley, an amoral murderer but also a man of culture and taste. 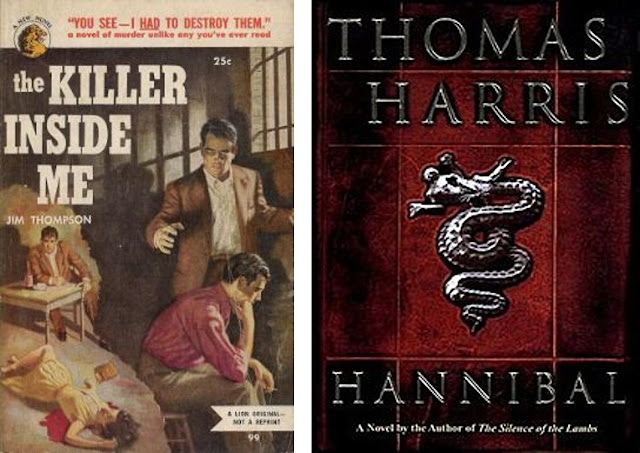 A writer that is credited as the master of the Locked-Room Mystery, though he also crafted narratives under pennames, such as Carter Dickson, Carr Dickson and Roger Fairbairn. Though it would be his character Dr Gideon Fell, that brought great appeal. In the novel The Three Coffins, Dr Fell speaks of a "locked room lecture", in which he delineates many of the methods by which apparently locked-room [or impossible-crime] murders might be committed. In the course of his discourse, he states, off-handily, that he and his listeners are, of course, characters in a book, participants, witnesses in a Perfect Murder.
The British Library’s publishing wing are reissuing golden-age classics including J D Carr, and well worth adding to your shelves.

It would be Thomas Harris paying a homage to John Dickson Carr, that would see Harris’ own singular creation Dr Hannibal Lecter deploying the identity of Dr Fell in 1999’s Hannibal.

With a vast canon of work, it would be the 1934 novel MURDER ON THE ORIENT EXPRESS that I select as a perfect murder. Though at the time of publication, the US title Murder in the Calais Coach was used to avoid confusion with the 1932 Graham Greene novel Stamboul Train which had been published in America as Orient Express.

A perfect murder occurs onboard the eponymous train when it becomes snowbound during Hercule Poirot's return to London from the Middle East.
Filmed twice, it also features a locked room mystery.

Arguably the most renowned outing for Sherlock Holmes and Dr John Watson, THE HOUND OF THE BASKERVILLES is my selection. I can add little to the extensive commentary to this tale of a perfect murder, which was first serialised by Strand Magazine in 1901.

Often filmed, it is the Basil Rathbone and Nigel Bruce adaptation from the 1940s that remains a firm favourite of many of us, and it can be viewed HERE

A writer who elegantly exposed the darker desires inherent in flawed people. It would be the Texan deputy sheriff Lou Ford in Thompson’s 1952 THE KILLER INSIDE ME that I would select for this listing of perfect murders. It details sexual sadism as an undercurrent to the horrors Thompson exposes. Even decades on, it packs a powerful reading experience. Filmed initially in 1976 with Stacy Keach; it would be the 2010 adaptation directed by Michael Winterbottom and starring Casey Affleck and Jessica Alba that would court controversy, with many [myself included] feeling nauseous over the notorious ‘punching’ scene.

Between James M Cain’s THE POSTMAN ALWAYS RINGS TWICE and DOUBLE INDEMNITY, I pick the latter for this selection of tales of perfect murders.  Published in 1943, it details an insurance man Walter Huff falling in love with married Phyllis Nirdlinger who wants to kill her husband - in an insurance scam; complete with a bleakness that is hard to match, it was adapted for screen in 1944 by Billy Wilder and Raymond Chandler [who also worked on the script for Patricia Highsmith’s Strangers on a Train for Alfred Hitchcock].

But I could go on, and on about these books and several others, but with packing for the upcoming Theakstons’ Crime Writing Festival 2019 which commences tomorrow; let me leave you with an anecdote from the festival, a few years ago, an anecdote that features murder. 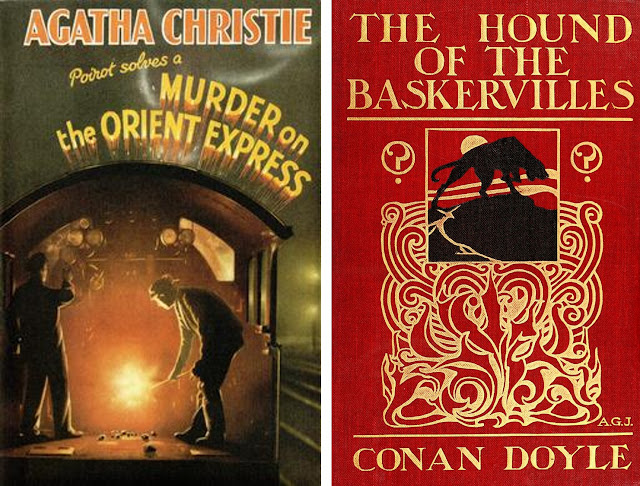 It was late and we found ourselves in conversation with crime writer, biographer and journalist Andrew Wilson. There was a group of us huddled in a circle, drinking Gin (well I was) - so I asked everyone 'if you had to, and I mean really HAD TO murder another person, knowing your own nature, what would be your chosen motive for a perfect murder?'
So, we went in the circle; we had Revenge, we had Hate, we had Money, Blackmail we had Love, we had Random event, we had Self-Defence, you get the drift. I was last, and had posed the question - I grew nervous, as all the usual motives were taken, so I attempted to change the subject; however Andrew Wilson, Crime Writer, Journalist and Biographer of Patricia Highsmith in his definitive BEAUTIFUL SHADOW - had other ideas and asked 'so enough with the excuses Ali, what would be your Motive for a perfect Murder?'
I had to answer. I had to reveal, so I did.

'Boredom. If I met someone sufficiently boring, I think I could commit murder' and we laughed, and we talked talked about Tom Ripley and the attraction of the amoral.

Coming full circle, anticipation awaits readers for Peter Swanson’s Eight Perfect Murders / Rules for Perfect Murders, so let’s look back at his earlier work and also a little background to those yet to experience his narratives, tales of fractured lives and flawed characters.

Here’s a little tease of what to expect from Rules for Perfect Murders / Eight Perfect Murders, the story of a bookseller who finds himself at the centre of an FBI investigation because a very clever killer has started using his list of fiction’s most ingenious murders.

Years ago, bookseller and mystery aficionado Malcolm Kershaw compiled a list of the genre’s most unsolvable murders, those that are almost impossible to crack—which he titled “Eight Perfect Murders”—chosen from among the best of the best including Agatha Christie’s A. B. C. Murders, Patricia Highsmith’s Strangers on a Train, Ira Levin’s Death Trap, A. A. Milne's Red House Mystery, Anthony Berkeley Cox's Malice Aforethought, James M. Cain's Double Indemnity, John D. Macdonald's The Drowner, and Donna Tartt's A Secret History.

But no one is more surprised than Mal, now the owner of the Old Devils Bookshop in Boston, when an FBI agent comes knocking on his door one snowy day in February. She’s looking for information about a series of unsolved murders that look eerily similar to the killings on Mal’s old list. And the FBI agent isn’t the only one interested in this bookseller who spends almost every night at home reading. There is killer is out there, watching his every move—a diabolical threat who knows way too much about Mal’s personal history, especially the secrets he’s never told anyone, even his recently deceased wife.
To protect himself, Mal begins looking into possible suspects . . . and sees a killer in everyone around him. But Mal doesn’t count on the investigation leaving a trail of death in its wake. Suddenly, a series of shocking twists leaves more victims dead—and the noose around Mal’s neck grows so tight he might never escape.

Peter Swanson’s debut novel, The Girl With a Clock for a Heart (2014), was described by Dennis Lehane as ‘a twisty, sexy, electric thrill ride’ and was nominated for the LA Times book award. His second novel The Kind Worth Killing (2015), a Richard and Judy pick, was shortlisted for the Ian Fleming Steel Dagger and named the iBooks Store’s Thriller of the Year, and was followed by three more critical and commercial hits, Her Every Fear (2017), All the Beautiful Lies (2018) and Before She Knew Him (2019). He lives with his wife and cat in Somerville, Massachusetts.

And here’s a recording of Peter from Portland talking about his work.

Whatever the title, it is available for pre-order, and rumour has it that those wonderful people at Faber and Faber will have a limited number of Proof / Review copies to issue at this years’ Theakstons’ Crime-Writing Festival in Harrogate.

Now time to pack, and see you in Yorkshire. 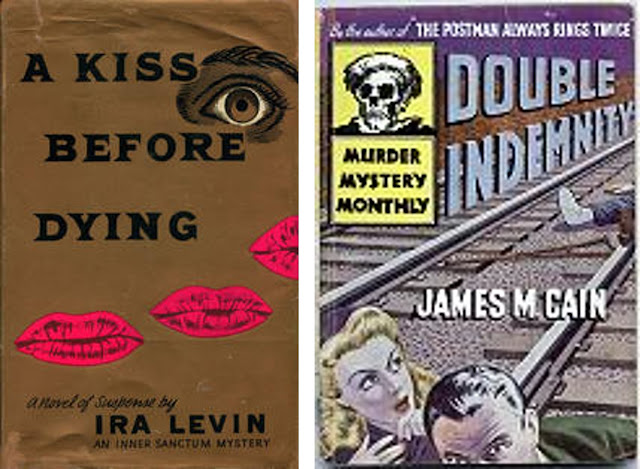