Books to look Forward to from Duckworth Press (Incl Farrago)

In Mermaid Confidential by Tim Dorsey, Serge Storms and his permanently baked sidekick, Coleman, decide to pump the brakes and live on island time. After years of manic road tripping across their beloved Sunshine State, the irrepressible anti-heroes drop anchor in the Florida Keys. They settle down in Pelican Bay, a thriving condo complex with scenic views and friendly neighbours. But the community is at war with investors who are buying up units and leasing them to young vacationers who party at all hours. With their little slice of heaven on the line, Serge takes it upon himself to convince the tourists to move on and quickly becomes a local favourite. Meanwhile, the island chain's long and rich smuggling heritage is causing mayhem - a gang war erupts when a local drug lord passes the family business to his young, enterprising son, and the sun-loving residents are suddenly dodging bullets. Luckily, Florida's most lovable serial killer is there to help! 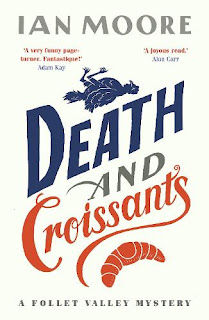 Richard is a middle-aged Englishman who runs a B&B in the fictional Val de Follet in the Loire Valley. Nothing ever happens to Richard, and really that's the way he likes it. One day, however, one of his older guests disappears, leaving behind a bloody handprint on the wallpaper. Another guest, the enigmatic Valerie, persuades a reluctant Richard to join her in investigating the disappearance. Richard remains a dazed passenger in the case until things become really serious and someone murders Ava Gardner, one of his beloved hens ... and you don't mess with a fellow's hens! Death and Croissants is by Ian Moore.

Dolly and the Bird of Paradise is by Dorothy Dunnett. Rita, a small, tough Scottish make-up artist is on Madeira trying to find out who killed Kim-Jim, an American make-up supremo. Also anchored off the island is Dolly, the yacht of Johnson Johnson with whom Rita teams up to get to the bottom of this foul deed. Rita's fighting spirits are aroused despite her danger. She is not one for quitting, even when she learns she is caught up in an international drug-smuggling ring.nnBut she also discovers that dealing with the maddeningly enigmatic Johnson Johnson is, by no stretch of the imagination, plain sailing. 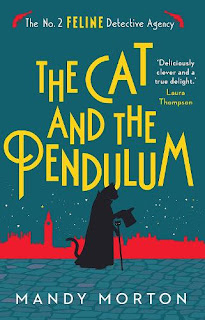 The Cat and the Pendulum is by Mandy Morton. When the celebrated crime writer Agatha Crispy engages Hettie and Tilly in the search for a stolen manuscript, our feline detective duo is plunged into a world of Dickensian thieves and murderers. Does the ghost of Jake the Nipper prowl the London Streets of Kitzrovia? Will Madame Two Paws's exhibition wax or wane? And will the secrets in the crypt of the church of St Mavis and Cucumber finally be revealed? Join Hettie and Tilly as they attempt to unravel yet another darkly humorous case for The No. 2 Feline Detective Agency.

When Sarah Cassells, a British girl who has just completed her training as a chef, hears of her father's violent death on Ibiza, she refuses to believe it is suicide. She goes to Ibiza to investigate and becomes involved with an art dealer; with two beautiful jetsetters; with her brother's strange predicament; with a remarkable American woman who is not all what she seems - and with Johnson Johnson, the mysterious portrait painter who shows up on his yacht, Dolly. As Ibiza prepares to celebrate Holy Week with the traditional processions, events become more and more macabre... Dolly and the Cookie Bird is by Dorothy Dunnett.

Dolly and the Doctor Bird is by Dorothy Dunnett. Dr B. McRannoch is in the Bahamas with her father who has moved there from Scotland because of asthma. She is a savvy and tough young woman who shows much independence of mind and spirit. However, when Sir Bart Edgecome, a British agent who has been positioned with arsenic falls ill on his way back from New York, she becomes involved in a series of events beyond her wildest imagination. Drawn into an espionage plot with multiple suspects, it is only the presence of enigmatic portrait painter Johnson Johnson on his yacht, Dolly, that saves the day. But nothing is quite as straightforward as it at first seems.