Books to Look Forward to from John Murray Press 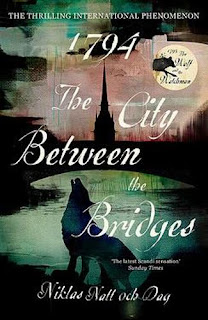 1794: The City Between The Bridges is by Niklas Natt och Dag. The year is 1794. A young nobleman, Eric Three Roses, languishes in hospital. Some think he would be just at home in the madhouse across the road. Ridden with guilt, he spends his nights writing down memories of his lost love who died on their wedding night. Her mother also mourns her and when no one listens to her suspicions, she begs the aid of the only person who will listen: Jean Mickel Cardell, the one-armed watchman. Cecil Winge is six months in the ground but when his younger brother Emil seeks out the watchman to retrieve his brother's missing pocket watch, Cardell enlists his help to discover what really happened at Three Roses' estate that night. But, unlike his dead brother, the younger Winge is an enigma, and Cardell soon realises that he may be more hindrance than help. And when they discover that a mysterious slave trader has been running Three Roses' affairs, it is a race against time to discover the truth before it's too late.In 1794, the second installment of Niklas Natt och Dag's historical noir trilogy, we are reunited with Mickel Cardell, Anna Stina Knapp, and the bustling world of late eighteenth century Stockholm. The city is about to see its darkest days yet as veneers crack and the splendour of old gives way to what is hiding in the city's nooks and crannies. 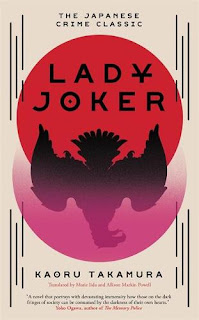 Lady Joker is by Kaoru Takamura. Tokyo, 1995. Five men meet at the racetrack every Sunday to bet on horses. They have little in common except a deep disaffection with their lives, but together they represent the social struggles and griefs of post-War Japan: a poorly socialized genius stuck working as a welder; a demoted detective with a chip on his shoulder; a Zainichi Korean banker sick of being ostracized for his ethnicity; a struggling single dad of a teenage girl with Down's syndrome. The fifth man bringing them all together is an elderly drugstore owner grieving his grandson, who has died in suspicious circumstances. Intent on revenge against a society that values corporate behemoths more than human life, the five conspirators decide to carry out a heist: kidnap the CEO of Japan's largest beer conglomerate and extract blood money from the company's corrupt financiers. Inspired by the unsolved true-crime kidnapping case perpetrated by "the Monster with 21 Faces," Lady Joker has become a cultural touchstone since its 1997 publication, acknowledged as the magnum opus by one of Japan's literary masters, twice adapted for film and TV and often taught in high school and college classrooms.

Intelligence has a new home. A governmental think-tank, whose remit is to curb the independence of the intelligence service, has lost one of its key members, and Claude Whelan-one-time head of MI5's Regent's Park-is tasked with tracking her down. But the trail leads straight back to the Park itself, with Diana Taverner as chief suspect. Has Diana overplayed her hand at last? What's her counterpart, Moscow's First Desk, doing in London? And does Jackson Lamb know more than he's telling? Over at Slough House, with Shirley Dander in rehab, Roddy Ho in dress rehearsal, and new recruit Ashley Khan turning up the heat, the slow horses are doing what they do best, and adding a little bit of chaos to an already unstable situation . . . There are bad actors everywhere, and they usually get their comeuppance before the credits roll. But politics is a dirty business, and in a world where lying, cheating and backstabbing are the norm, sometimes the good guys can find themselves outgunned. Bad Actors is by Mick Herron.