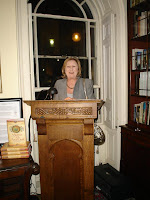 On a mild November evening the UK publishing world gathered at Six Fitzroy Square, London W1 to discover who won this year’s CWA Ellis Peters Historical Crime Award. The award is sponsored by the Estate of Ellis Peters and her publishers, the Headline Book Publishing Group and the Little, Brown Book Group. After a brief introduction by David Shelley representing Little, Brown and the Ellis Peters esatate he handed over the proceeding to Janet Laurence. After giving the audience a run down of the entries she announced that the winner, and recipient of the £3000 prize money was ARIANA FRANKLIN for MISTRESS OF DEATH.

The shortlist consisted of Jason Goodwin - THE SNAKE STONE (FABER&FABER);Philip Kerr - THE ONE FROM THE OTHER (Quercus);Andrew Martin - MURDER AT DEVIATION JUNCTION (Faber & Faber);Mark Mills, THE SAVAGE GARDEN, (HarperCollins)and Stef Penney - THE TENDERNESS OF WOLVES (Quercus).
Posted by Mike Stotter at 16:37