Macmillan calls time on Pan Bookshop & Bond is Back

ONE OF LONDON'S most iconic bookshops, the Pan Bookshop in Fulham Road, is to close in January after 32 years trading. Parent company Macmillan cites “tough market conditions and a decline in the overall trading of independent bookshops”, as well as its position in one of the capital's most expensive high street locations.
Macmillan is in discussions with a potential new tenant and is in consultation with Manager Julian Rafot and his staff of eight full-time booksellers, who are supplemented by seven part-time assistants. One staffer, Kaaron Ramus, has been there for 20 years and Rafot for five years. Veteran bookseller Geoffrey Bailey, who works at the shop part-time and former manager of Crime In Store and Crime On Store, told Publishing News: “It's a great shock to us all. It is going to be particularly devastating for our customers, who are all local regulars and have been coming here for many years.” The shop has several high profile customers, including Jeremy Paxman, Simon Sebag Montefiore, Hugh Grant and Jemima Khan. Geoffrey can glean some consolation in being appointed an incoming judge for the CWA Ellis Peters Historical Crime Awards. 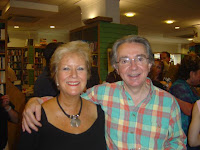 There are rumours going around that Daniel Craig as been seen in London this week, and also at Pinewood Studios, where Bond 22 will be filmed. 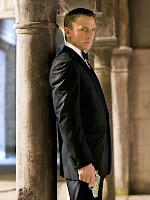 According to reports, Craig is there to view screentests of potential actresses who could star opposite him in the 22nd James Bond film, which starts shooting in January. Media in Brazil claim Cleo Pires is the favourite to land the lead female role, but there are reportedly five others in contention, including Israeli actress Moran Atias. Dame Judi Dench (M) and Giancarlo Giannini (Mathis) will also reprise their roles. The screenplay has been written by Paul Haggis, based on a first draft screenplay developed by regular scribes Neal Purvis & Robert Wade. The story will be a direct continuation of the events of Casino Royale. Composer David Arnold is to score again and, if rumours be true, Kylie Minogue will sing the main theme. Craig also admits that he would love to appear on UK TV serial Heartbeat (created by Nicholas Rhea from his Constable series of books), as his Mum loves it and it would be a thrill to do. Heartbeat is set in the 1960s, in the fictional Yorkshire town of Aidensfield. The first seasons focus on the lives of London policeman Nick Rowan, who moves to the village with his doctor wife Kate.
Posted by Mike Stotter at 10:28