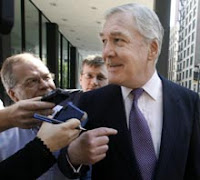 I blogged about Conrad Black back in June 22 and it seems that legal complications make it impossible for him to appear in person, but thanks to LongPen™, Conrad Black will autograph his latest book, the critically acclaimed The Invincible Quest: the Life of Richard Milhous Nixon (Quercus) at Waterstone’s Piccadilly, in London on November 28th, 6.30pm, from his home in Palm Beach, Florida. Lord Black, once one of the world’s most powerful press barons, is facing a prison term as he is due to be sentenced on December 10th.

Andrew Roberts, the acclaimed historian, will act as interviewer and host for the evening.

Since its publication in the spring, The Invincible Quest has received international critical acclaim. Almost forty years after he was elected president of the United States, Richard Milhaus Nixon remains one of the most polarizing leaders of the twentieth century. His was a life of contradictions: re-elected by a landslide victory, he left office in disgrace; often awkward and sometimes self-pitying, Nixon captivated legions of ordinary citizens. Yet amidst such controversies as Watergate and the Vietnam War, there were also a number of brilliant domestic and foreign policy successes such as the opening up of U.S. relations with China, the détente between the United States and the Soviet Union, the creation of the Environmental Protection Agency and the completion of school desegregation. Extensively researched and rich in detail, The Invincible Quest sheds new light on an extraordinarily complex man.

Invented by Margaret Atwood, the LongPen™ is the world's first long distance, real-time, real pen and ink autographing device. Representing a giant leap forward in marketing and publicity, it operates over the Internet and incorporates video conferencing, allowing celebrities to meet with fans and to sign autographs for them from anywhere in the world without actually being at the event location. Offering a legal signature to finalize transactions, LongPen™ also facilitates the signing of documents, contracts, treaties, and so on.

Waterstone's is the first UK book retailer to conduct a pilot project with LongPen, following its launch in Canada, and a series of exciting events at literary festivals on either side of the Atlantic.

The first transatlantic public event using Margaret Atwood's LongPen™ invention was unveiled at the Edinburgh International Book Festival in August, with Andrew O'Hagan in Charlotte Square Gardens talking to legendary US author Norman Mailer from his home in Provincetown. With the use of this extraordinary new technology, Mailer spoke for an hour, answering questions from a capacity audience, and remotely signing a number of books. This was to be Mailer’s final public appearance in the UK.
For further information on the event with Conrad Black at Waterstone’s please contact Anwen Hooson on 020 8996 4355 or anwen.hooson@waterstones.com