Lunching at The Luxe 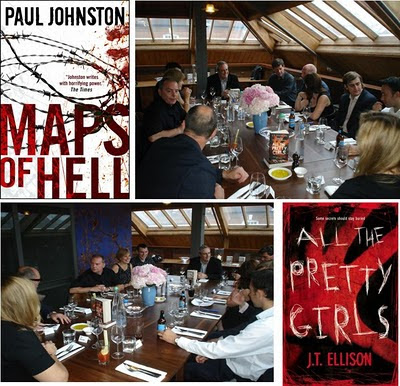 The Shots Editors, Mike Stotter and Ali Karim were kindly invited to lunch thanks to MIDAS PR and MIRA Books to celebrate the launch of Paul Johnston’s MAPS OF HELL and the UK debut of J T Ellison’s ALL THE PRETTY GIRLS. Joining the celebration were UK Critics Henry Sutton [Books editor for The Mirror], Mike Carlson, Peter Guttridge [The Observer] and Jake Kerridge [The Telegraph], as well as booksellers and the team from MIRA Publishing headed by Oliver Rhodes.

MIRA / MIDAS had booked a private room at The Luxe in East London, a mere stones throw from Whitechapel where J T Ellison was amused to learn that Jack the Ripper operated. Considering the darkness that lies between the pages of both these terrific crime novels, a more apt location for lunch would be hard to find.

We’ve enjoyed Paul Johnstone’s Matt Wells thrillers, which are violent looks into the unhinged. Paul is an accomplished writer, who I first discovered with his Future / Noir series featuring Quint Dalrymple. MAPS OF HELL is the third novel featuring Johnston’s alter-ego Matt Wells –
Crime writer Matt Wells could never have conjured a plot this twisted. A secret Nazi-style militia running brainwashing experiments in a remote location in the States have held him prisoner. He knows they have been feeding him instructions – but why?

Tortured by maddening snatches of a life he can’t trust as his own – including a mysterious blonde woman who he feels he should remember – Matt escapes from his kidnappers in a desperate attempt to discover who he is. When a series of sadistic murders puts Matt in the frame and on the run from the FBI, Matt must expose this fiendish organisation – before events reach their terrifying conclusion.

We’ve known J T Ellison for some time now, first bumping into her at Thrillerfest 2006 in Phoenix Arizona, where she was one of the Killer Year debut authors with her debut ‘All The Pretty Girls’. That novel debuts in the UK this month -

When a local girl falls prey to a sadistic serial killer, Nashville homicide lieutenant Taylor Jackson and her lover, FBI profiler Dr. John Baldwin, find themselves in a joint investigation pursuing a vicious murderer. The Southern Strangler is slaughtering his way through the Southeast, leaving a gruesome memento at each crime scene—the prior victim’s severed hand. Ambitious TV reporter Whitney Connolly is certain the Southern

Strangler is her ticket out of Nashville; she’s got a scoop that could break the case. She has no idea how close to this story she really is—or what it will cost her. As the killer spirals out of control, everyone involved must face a horrible truth—that the purest evil is born of private lies.

Needless to say both these novels from MIRA are highly recommended if you like your crime fiction to take you to the darkest edges of the imagination.

After lunch we headed in the car to Cambridge for the annual Bodies in the Bookstore event at Heffers to meet up with Ayo Onatade and our colleagues to celebrate the crime fiction genre – click here for photos of that event.
Posted by Ali Karim at 14:20