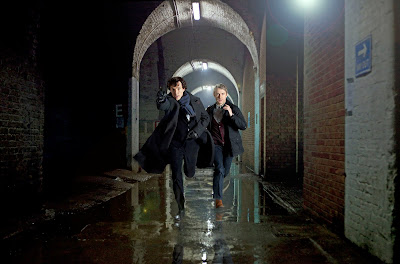 Regulars at Sherlock Holmes Society get-togethers may have thrown their deerstalkers on the ground and cursed loudly at news of the BBC modernising their hero.

But having seen a preview of Sherlock at a screening this week, I can assure them that storming Television Centre with Holmes’ favourite weapons of canes, swords and riding crops won’t be necessary.

A Study in Pink is the first of three 90-minute films. This opener, written by Steven Moffat (moonlighting from his day job as showrunner for Doctor Who), echoes Holmes’ first adventure, published in 1887, A Study in Scarlet.

Rupert Graves as Lestrade
So we see Watson returning home broken by soldierly duty in Afghanistan, as in the original, and being introduced to the friendless genius Holmes, who is looking for a flatmate.

Watson is of course irritated and dazzled by his new chum’s presumptuousness, but they bond when Holmes is called upon by DI Lestrade (Rupert Graves), who is stumped – ‘The police are always out of their depth,’ says our hero – by three serial suicides.

Of the crime’s unravelling I can reveal nothing for fear of ruining the fun for viewers (and fear of being slipped Devil’s-Foot Root poison by someone from the Society).

Holmes’ website – The Science of Deduction
But of the update it’s safe to say Moffat and Gatiss (a star and writer of Doctor Who and The League of Gentlemen) were right to think that Holmes could survive without Hansom carriages and London fog if the essential dash of the stories and characters was preserved.

What they’ve cut is the deerstalker, the pipe smoking and the drug taking, which Gatiss points out was always less important than the sheer humour in the adventures. Updates include Holmes having his own website, logically enough The Science of Deduction.

So it’s safe to deduce that Conan Doyles’ detective was always too good to be tied down by period features. He’s survived German versions, Second World War escapades (Sherlock Holmes in Washington, 1943), and most recently Guy Ritchie (not too shabby an effort by the mockney director, as it happens).

007-influenced Score
And of course the creators had the example of other recent and very successful updates of classics such as Clueless and Casino Royale. With inspired direction by Paul McGuigan (Lucky Number Slevin, Gangster No.1) and a sweeping acoustic score (I spotted 007 composer David Arnold on the credits), Sherlock can now join the club.

After the screening, I nabbed 10 minutes with Steven Moffat and asked him how big a challenge it is to be putting brilliant words into the mouth of a genius who never says a dull thing.

‘Is it a challenge,’ he told me, ‘although I’ve got more notice than Sherlock has. He has to do it in real time and I can take several days. That’s where I make up the shortfall between my intelligence and his.

Holmes’ Deductions
‘Yes, he must always be clever and that’s one of things we’ve set ourselves, Mark and I. We’re very strict about this. In the original stories Doyle does start to get a wee bit lazy about the deductions, and later on he hardly makes any. And we’ve said, look we’re just going to have to think and think and think of stuff you can credibly do. When I was a kid that was the element that absolutely transfixed me. And I got disappointed – “I see you’ve come from Bristol, you’ve got a train ticket.” Come on, Sir Arthur, we want better than that.

‘So we all go around suggesting deductions to each other, Steve Thompson as well [Thompson has written episode three; Gatiss episode two]. My wife even came up with a brilliant one about how to deduce that someone is left-handed. So we’ve got a bank of deductions and if we get stuck we say, here have this one. We did lift some from the books. The one about the mobile phone [in Study in Pink] is quite close to the deductions about the pocket watch in The Sign of Four. I always thought that was an incredibly beautifully written sequence, so I borrowed that one blatantly and with great joy.’

Sherlock Holmes and Doctor Who
Moffat made some interesting points about the connections between Holmes and Doctor Who. ‘They get it wrong at the very, very beginning of Doctor Who. The Doctor isn’t the hero, he’s a senile old man, a git, he’s not very nice. And [story editor] David Whitaker says, Look, this isn’t working. And I believe there’s a memo where he says let’s make him make him more like Sherlock Holmes, let’s make him a genius, difficult but a genius. 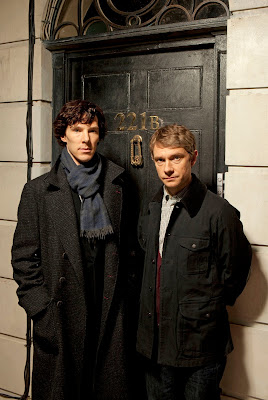 ‘So Doctor Who is deliberately patterned on Sherlock Holmes. When people ask me for a comparison I always find myself saying a very odd thing, which is that the Doctor is more human. By which I mean that he is like an angle who aspires to be human, whereas Holmes is a human who aspires to be a god. So the very things the Doctor admires and embraces, the silliness, lovability and huge emotions, are exactly the things Holmes is running away from.’

‘So Long as It Doesn’t Kill Me’
Of his workload writing six Doctor Whos, including the Christmas special, and working on Sherlock, Moffat said, ‘There is no way of balancing this. The last year has been extraordinary. I’ve had about four days off since Christmas. I work every weekend, get up early in the morning, go to bed late at night. It’s extraordinary, but it’s great fun too – so long as it doesn’t kill me.’

For pizzazz and verve, Sherlock will surely be one of the best TV crime-dramas of the year, if not the best. Who needs the CSI professional army of experts when you’ve got a British amateur genius like the man at 221b Baker Street? The game is afoot (or ‘on,’ as Holmes says in 2010).
Photos © BBC TV

Crime hounds who haven’t sniffed out BBC Radio 7 yet should investigate the channel immediately.

It’s a fascinating realm of great detective dramas and classic crime shows. Recently there’s been a pretty good serialisation of John Harvey’s Inspector Resnick: Wasted Years. Coming up in August is Ruth Rendell’s The Fever Tree and Other Stories (Saturday, 7 August, 11.30pm) and a whole week of PD James’ stories to mark the author’s 90th birthday, including Adam Dalgliesh – Devices and Desires (Saturday, 7 August, 11pm) and A Taste for Death (Monday, 9 August, 11am). The highlight of this week is an exclusive interview with the grande dame of detective fiction (keep an eye out for its broadcast time).

With podcasts and iPlayer it’s easier than ever to dip in at your convenience. Give the channel the once over here.

Lewis recently did so well for ITV1 that they’ve just commissioned another four episodes with Kevin Whately and Laurence Fox. It’s hard to argue with nine-million viewers for the last series, but it still leaves me cold, having a bland, primetime cop-show-by-numbers feel to it.

Author Colin Dexter, who created the Bafta-winning Inspector Morse, from which this was spun, will still be consulted for the Lewis episodes, but the new shows lack the original’s depth and air of remorse (sorry about the pun).

Garrow’s Law
The Beeb has just started filming a second series of Garrow’s Law, the intriguing drama based on real legal cases from the late 18th century. It stars Andrew Buchan, Alun Armstrong and Rupert Graves and was a fascinating look at the life and times of pioneering barrister William Garrow and some very dodgy legal practices at a time when the Old Bailey was something of a judicial circus.

The Shadow Line
Christopher Eccleston has also started filming The Shadow Line for Auntie on the Isle of Man, in which he plays a drug baron. This is a six-part ‘noir thriller’ charting the impact of an underworld figure on a variety of characters. Also starring Chiwetel Ejiofor, Sir Antony Sher, Stephen Rea, Rafe Spall, Kierston Wareing and Lesley Sharp.

Written, produced and directed by Hugo Blick (Marion & Geoff). So no pressure on him, then.

Top Boy
C4 is also riding the crime wave with Top Boy, written by Ronan Bennett (who penned the film Public Enemies), about young gang members in East London. This four-parter follows Dushane, a 19-year-old street thug with ambitions of becoming a dealer, and is based on first-hand research by Bennett and story consultant Gerry Jackson, both Hackney residents. Cast yet to be confirmed, but it sounds like one to watch out for.
Posted by Mike Stotter at 12:39