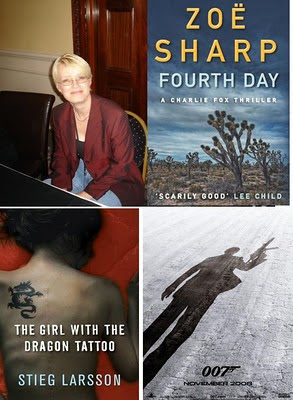 As many of us are recovering from the wonderful Theakstons’ Old Peculiar Crime Writing Festival at Harrogate; I am delighted to learn that Zoë Sharp, who I first met at Heffers Bodies in the Bookstore back in 2003 – has a TV / Film Option -

And more film news, as Daniel Craig has confirmed that he will star as Mikael Blomkvist in the Hollywood adaptation of Stieg Larsson’s THE GIRL WITH THE DRAGON TATTOO as reported by Deadline.com –

Daniel Craig has closed his deal to play journalist Mikael Blomkvist in The Girl With the Dragon Tattoo, a deal which factors in options for two sequels based on The Girl Who Played With Fire, and The Girl Who Kicked The Hornets' Nest. The novels comprise the bestselling trilogy by late Stieg Larsson.

Deadline told you first about the Craig talks, which back in June were hardly a certainty, because there were so many hurdles to jump. I'm told that with a whole lot of juggling between three studios, Craig will be able to make the movies. Essentially, he will begin work on the first film in Sweden, as soon as he removes his cowboy hat from shooting Cowboys and Aliens in the early fall. Scheduling was coordinated between Dragon Tattoo-maker Sony Pictures Entertainment, DreamWorks partners Stacey Snider and Steven Spielberg--who were flexible on the Cowboys and Aliens schedule--and James Bond rights holders Barbara Broccoli and Michael Wilson. The latter situation was tougher because of the uncertainty over when the next Bond film will get made--probably with Sam Mendes directing--because of MGM's paralysis. CAA made Craig's deal.
This puts Craig in a position no previous James Bond ever was in. He's got two certain franchises between Bond and the Larsson books, and possibly another in Cowboys and Aliens, which he stars in with Harrison Ford, and for which Craig has an option on a second picture. Comic-Con crowds responded glowingly to footage shown by director Jon Favreau.