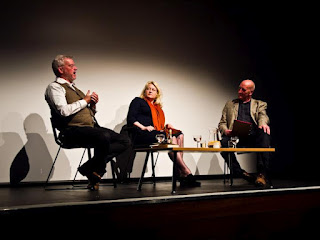 ...specifically Patrick Hamilton's "Hangover Square", a seminal work of British Noir.  Or maybe British Seedy?  Anyway, the highly intelligent and acutely funny LAURA WILSON engaged in a terrific conversation with Hamilton biographer, NIGEL JONES, (ditto intelligence and humour) as part of the Brighton Festival on Friday 12 May.  Although "Hangover Square"   is sub-titled "A Novel Of Earls Court" and has been claimed by Iain Sinclair and others as a great London novel it has a strong Brighton resonance - and Hamilton himself, born in Keymer, just up the road, had strong Brighton connections.  (Graham "Brighton Rock" Greene thought Hamilton's "West Pier", the first of his Gorse trilogy, the best book ever written about Brighton.)

The packed event was linked to an interesting art installation in the Phoenix Gallery in which several rooms featured in the novel are recreated.  Most tantalising?  A glimpse through a pane of glass in a door of the bathroom where Bone, the protagonist of the novel, killed Netta, the woman who so cynically led him on.  See it if you can.

The photo (by Nigel Bailey) shows Nigel Jones in full flow, Laura Wilson ready to respond and me just enjoying the show.