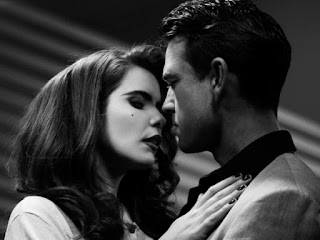 A NICE TOUCH is a 12 minute short made by debut director Dick Jones, set in 1953 and starring DOUGRAY SCOTT as a sociopathic actor who, by telephone, persuades his long-distance lover to murder her husband. He is also having an affair with PALOMA FAITH, his co-star in an "I Love Lucy" style TV show. Yes, all that in 12 minutes.  It's a kind of reverse film noir in that it swaps the usual premise for those films (man is doomed because of his obsessions with femme fatale).
The score is by GUY BARKER, trumpeter and composer, who arranged that great jazz score for Anthony Minghella's The Talented Mr Ripley.  PALOMA FAITH, who is, of course, a skilled singer/songwriter too, sings a suitably smoky song over the end credits.
I was at Cheltenham Jazz Festival to orchestrate (see what I did there?) a panel discussion of the short after its screening. In addition to Jones, Faith and Barker the panel had neuroscientist Benedetto De Martino who was there to talk about the decision-making in the movie. (The event was sponsored by the wonderful Wellcome Trust - check out their gallery and library if you're ever in London near Euston.)
The short is based on a story that was first filmed by Alfred Hitchcock in the early Sixties in his Alfred Hitchcock Presents TV series.  You can watch that version (featuring a young George Segal) on YouTube.  Find the short if you can though.  I think it might be on Vimeo and it's well worth a watch.
Peter Guttridge
Posted by Peter G. at 12:16