Linda Fairstein on How I Write What I Know 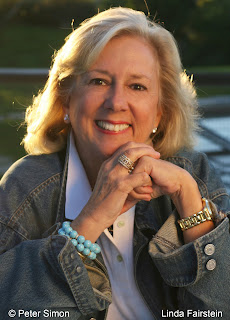 In 1972, when I joined the office of the legendary New York County District Attorney as a young prosecutor, my awareness of the great work of that institution was forged and informed while I was a law student.  But long before that, my interest was reinforced by crime novels, film, and television, which fictionalized many of the famous cases that had been handled by my predecessors.

I had majored in English literature at an elite women’s college in the 60’s, hoping to fulfill my childhood ambition to be a novelist.   By graduation, I realized my father was right – I had nothing to write about. My second choice was public service, so I went off to law school, never abandoning the dream to become an author.

When Scott Turow’s great courtroom drama – PRESUMED INNOCENT – was made into a movie, the director asked me to consult.  The victim was, after all, a sex crimes prosecutor, just like me.  When LAW AND ORDER:SVU was created, it was based entirely on the work of my unit.   Each time Hollywood knocked on my door for assistance, my desire to work on my own crime novels grew stronger.  The screenwriters and directors were picking my brain because the authenticity of my job experience was what they hoped to bring to the project.  The old adage – write what you know – became more and more meaningful to me.  I started to write the Alex Cooper series of crime novels while I was still a prosecutor, anxious to capture the immediacy and excitement of my job, giving that voice and spirit to my protagonist.

The first five Coop novels were published before I left the office in 2002, after thirty years of work that was a challenge every day, and that I loved more than I could ever have imagined when I started out in the practice of law. I figured that when I stepped out of my high-profile job - where I had been responsible for supervising sex crimes, domestic violence, child abuse, and related homicides for more than 25 years – I would be less likely to be exposed to all the cutting edge forensic developments that had made my day job so unique.  In 1986, for example, I was one of the first five prosecutors in America to be introduced to DNA technology, which helped our team solve a sensational murder case, even though the judge refused to allow the jury to hear about this new science.  How could I possibly keep current enough to make Coop’s investigations as timely as they were in the early books?

The transition was far easier than I had feared.  First, I had three decades of insider information – technique, language, courtroom dynamics – that would carry me a long way in my plotting.  Second, I thought the work was so interesting that I planned to keep my credentials as a lawyer, and to this day I handle scores of cases pro bono and continue to consult on these issues – with corporations, national sports teams, and universities which have seen sexual assault cases increase in such dramatic numbers.  Third is that the best perk of my job was the friendships I made – the young lawyers who honed their skills on my watch, the brilliant detectives who taught me how to investigate every kind of violent felony, and the forensic pathologists who guided me through my first autopsies and made me understand why DNA would become my three favorite letters of the alphabet.  I count on my beloved friends every day to keep me informed and up to the moment on law and science.  In exchange, my pals make cameo appearances in my books – always good guys, of course – covering Coop’s back and helping her make her way through capers and catastrophes.

In crafting DEVIL’S BRIDGE, one of the smartest cops I’ve ever known – Lt. Jimmy West of the Cold Case Unit, who oversees the re-investigation of all unsolved  murders in Manhattan as old as 40 years - took me every step of the way through the NYPD’s manner of investigating the kidnapping of prominent figures…the right way, and the rogue way.  Both directions are always great for fiction.  I never pass up an opportunity to spend a night tour in a patrol car, go to the morgue for a tutorial, or sit in on a lecture at the D.A.’s Office – still working with my former colleagues on reducing the backlog of untested rape evidence collection kits, a project I started fifteen years ago when I still wore my prosecutorial hat.

I think the best surprise of my writer’s life has been the great fun of mixing law and literature.  I’ve had two careers, both of which I’ve loved.  The chance to use the raw, real texture of my legal background to infuse Alex Cooper with authentic style is something for I’m grateful every day.  Need any help with a courtroom scene?  Just give me a call.


The Manhattan waterfront is one of New York City's most magnificent vistas, boasting both the majestic Statue of Liberty and the busy George Washington Bridge. But Detective Mike Chapman is about to become far too well acquainted with the dangerous side of the Hudson river and its islands when he takes on his most personal case yet: the disappearance of Alex Cooper. Coop is missing - but there are so many leads and terrifying complications: scores of enemies she has made after a decade of putting criminals behind bars; a recent security breach with dangerous repercussions; and a new intimacy in her relationship with Mike, causing the Police Commissioner himself to be wary of the methods Mike will use to get Coop back... if he can

More information about Linda Fairstein and her books can be found on her website.  You can also follow her on Twitter @LindaFairstein.  You can also find her on Facebook.
Posted by Ayo Onatade at 00:00