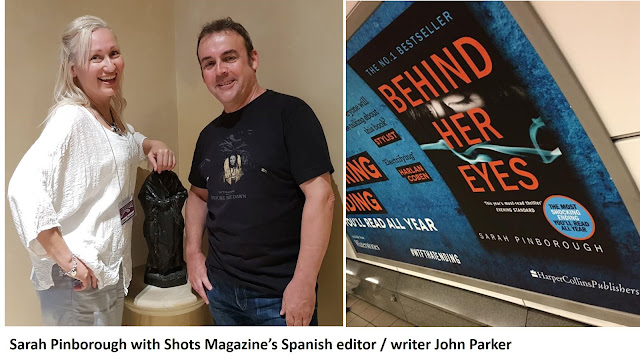 We now present an exchange with Sarah Pinborough, which includes some interesting insights regarding her Netflix excursion as well as her upcoming new work.

So over to John Parker -

Sarah Pinborough is a name that will be familiar to Shots readers. Her most recent novels include 13 Minutes, Cross Her Heart and the internationally acclaimed, NYT bestselling and Sunday Times #1 thriller, Behind Her Eyes.  Sarah visited Celsius 232 in Avilés for the first time after having to cancel her visit last year due to unforeseen circumstances last summer, but she promised to come over in 2019 and she was as good as her word. It was certainly worth the wait.

John Parker: Here I am in the NH Hotel in Avilés with Sarah Pinborough. How are you, Sarah?

John: And how are they treating you here at Celsius 232?

Sarah: Good, yeah! All I’ve done is eat! And drink!

John: I guess the most interesting thing to talk about at the moment is, Detrás de Sus Ojos or Behind Her Eyes, your latest novel.

Sarah: No, that’s my one before last but it’s my latest in Spain.

John: Yeah, that’s what I meant, sorry. And it’s going to be adapted into…

Sarah:  A Netflix 6-part series which is filming as we speak.

John: Do you know anything about it?

Sarah: Yeah!  I’ve been very involved. I went to the read through and I know the producers quite well because we are going to work on some other stuff so, yeah, they’ve done a pretty good adaptation. A man called Steve Lightfoot has adapted it and he’s done Hannibal and The Punisher so he’s written quite a lot of stuff with some weird in it. He has written it with another female writer (Angela Lamanna) and they have kept it quite true to the book.

John: Do you know when it’s coming out?

Sarah: I think about June next year, June or July next year.

John: So, everyone get your Netflix subscriptions!

Sarah: Please do. And watch it all at once cos’ I’ve learned that about Netflix…

Sarah: Yeah, they renew things on the binge…

Sarah: It’s all about how many people will watch it in the first two weeks.

John: Right, got you! Are you watching anything now?

Sarah: I have just what have I done………….? I’ve done loads of things recently. Obviously, all the Villanelle stuff (Killing Eve), um, Dead To Her?  No! Dead To Me!  I should say Dead to Her is the name of my next book.

John: OK! Is that an exclusive?

Sarah: (laughs) Yeah, it is actually. They’ve just getting some proofs at HarperCollins But, yeah, loads of stuff. I inhale Netflix. I inhale it.

John: And HBO as well, I suppose?

Sarah: Yeah, everything. I’ve got a Now TV stick now. The world is my oyster.

John: Yeah, I suppose there’s a lot of potential with all these new platforms that are coming up.

Sarah: Yeah, there is.

John: Disney taking over the world

Sarah: Yeah, but they kind of kill everything as they go.
(Laughter) 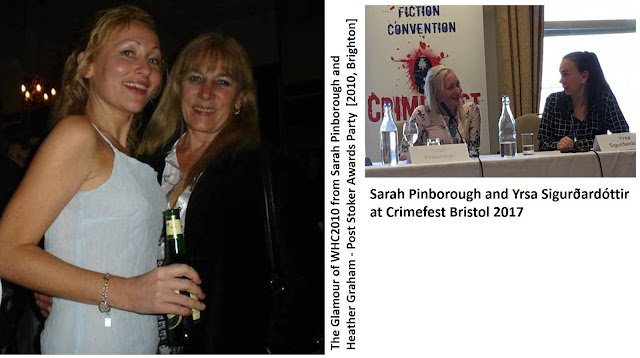 John: So, let’s talk about your influences. I mean, I’m sure this is old ground for you but for new readers, they’d like to know.

Sarah: I think early influences, obviously Stephen King, anyone of my age has that. Daphne de Maurier. You know, I loved Rebecca.  I think it’s the first example in modern times of a really good domestic thriller. You know? Like Girl on A Train, Gone Girl, that kind of book? Rebecca did it first. Um, John Connolly definitely showed me how you could mix genres, blend them, you know?

More recently, I’ve loved Liz Nugent’s writing. She’s written a couple of really good books. I think she just won the Irish book of the year… Megan Abbott, you know, I like anything with a good thriller-y twist.  But it changes in that everything you read that is good, you think, oh, you know, I could do something with that or try something like that so it does all change. You know, now I’m kind of influenced book by book rather than by authors, you know what I mean? 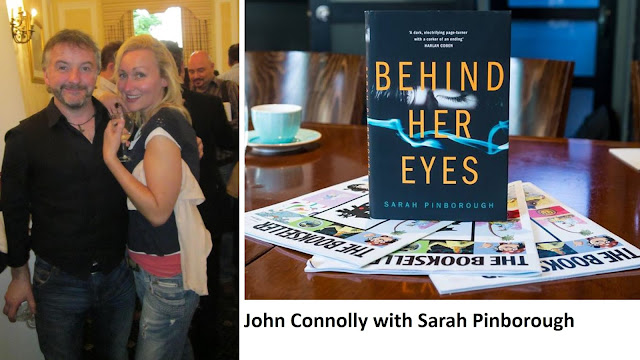 John: Yeah. So, when you were younger, were you were a voracious reader?

Sarah: Yeah! And I was at boarding school so there was nothing else to do! (laughs) But I think when you’re young, you read much more widely than you do as an adult so I would read all kinds of rubbish! Well, I say rubbish but not … you know, Wilbur Smith, Dracula, through to all those Pan Books of Horror, you know? Like, all of those…

John: It’s amazing how many people have read the Herbert Van Thal horror books. John Connolly mentioned them yesterday in his interview.  I’ve read them…

Sarah: Yeah! And I used to think that I hadn’t .You know I sort of started in horror and there’s a real sort of bunch of people who are really proper fans of horror and I’d say, “ No, I’ve not read that, I’ve not read that.”  And then I’d pick up one of the Van Thal books and I’d go, “Oh, I read this when I was about 10 or something!”  But I just didn’t pay attention to who it was.

John: Some of them mark you as well and stay with you forever.

Sarah: Yeah. And some of those old Twilight Zones and stuff, those have stayed with me too. But yeah, I read historical fiction and all sorts of things. I remember going through all of Graham Greene when I was about 13. Now when I’m reading I think, “Oh! This is a bit wordy!”  But I think you just read better when you are younger.

John: You’ve written a lot of stuff!  You could be considered prolific!

Sarah: I’m less prolific than I used to be. I remember someone saying… I think it may have been Michael Marshall Smith who said to me, “Sarah, prolific is not the best.” Because I used to say that some people were so prolific and he’d say it’s not the best adjective to describe a writer, you know? It’s not always the best one. So now I’m about a book every year, year and a half. I went through a little phase of, like, two books a year but I was trying to make a living.  You know? And I’ve never bought into the starving artist thing so I worked as long as I needed to and then I took six months out to write a book. I saved some money. I thought, well, I’ll take six months out of teaching and then I’ll go back but I wanted to try and be more ambitious. Which was… it became A Matter of Blood which was the first of a trilogy. So once I had gone full-time, it took 2 books a year to make 35 grand a year. (Laughter). So that was what I did. 2 books a year.

Sara: I was for about 6 years.

John: What did you teach?

Sarah: English. I was Head of English in secondary.

John: Did you enjoy it?

Sarah: mmm, enjoy is a strong word. I liked the kids but teaching is boring.

John: Yeah, I can understand that. Ok. You wrote books under the pseudonym of Sarah Silverwood…

Sarah: They were fantasy for children and I would have done them under my own name but my editor at the time decided a different name would be better. I don’t really know why. I think because I was writing adult crime fiction at the same time, she thought people would pick them up and get confused but as it turned out, just no one bought them because they were out under a different name. So I’ve never done a different name since.

John: I saw an interview with you online recently and you spoke about Michael Marshall Smith and you mentioned you were a fan of his book Intruders.

John: I loved the book and I liked the TV series too.

Sarah: Oh, I loved the book so much that I couldn’t get into the TV series. I thought it was a bit slow. But I probably didn’t give it the full chance.

John: It was where Mille Bob Brown started out. Have you been watching Stranger Things?

John: I liked it more than Season 2.

Sarah: Oh, really?  I’m only two episodes in so I might have to give it a chance.

John: I recommend it. I don’t want to go into it too much but there is one scene which you have to avoid spoilers of. It’s a marvellous moment towards the end of the series which will appeal to your generation especially.

John: So, you mentioned a new book. When will that be coming out?

Sarah: In February. It’s called Dead To Her. It’s set in Savannah, Georgia and it’s rich people being awful to each othe , with some voodoo.  I’m calling it Midnight in The Garden of Evil meets Big Little Lies. There’s that kind of vibe. Everyone seems very happy with it. It’s coming out in America at the same time. We’ve already sold the television rights.

John: That sounds great. We look forward to it. Thank you so much for your time, Sarah.

Sarah: Not at all. It was a pleasure.

Shots Magazine pass thanks to Jorge Iván Argiz and the organisers of the 2019 Celsius 232 festival, and to Sarah Pinborough for their time, insight and the soft fruits provided.

More information on her work is available from > https://sarahpinborough.com/ if you’ve not read her work, we’d urge you grab her work at the first available opportunity.

And thanks to our Spanish representative, writer, reviewer and editor John Parker, who is a Graduate-qualified English/Spanish Teacher, owner and director of CHAT ENGLISH, an English Language Centre in Avilés on the north coast of Spain John is a voracious reader, and has loved horror fiction for many, many years. 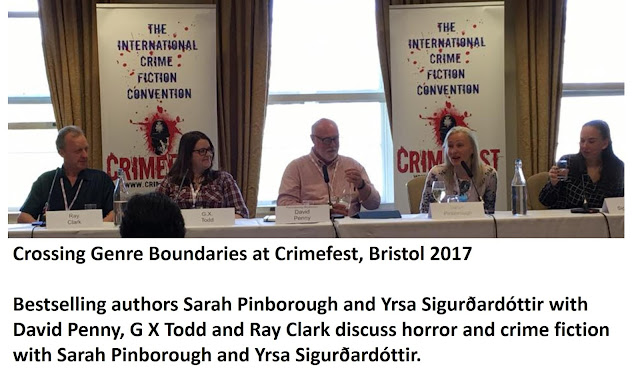