The deal was arranged by Rebecca Watson at Valerie Hoskins Associates on behalf of literary agent Sara Menguc.

The Long Call is the third collaboration between Cleeves and Silverprint Pictures¨ a partnership that has produced Shetland © BBC® and Vera © ITV®¨ two of television’s most popular dramas.  Both the television series and the books they are based on have become international sensations¨ capturing the hearts of millions worldwide.

Author Ann Cleeves says
“I’m delighted that the team at Silverprint has optioned The Long Call.  The adaptations of Vera and Shetland have captured the essence of my books¨ while making TV dramas that are hugely successful in their own right”

Kate Bartlett¨ Executive Producer¨ Silverprint says
“After almost a decade working together¨ we are thrilled to be continuing our creative partnership with Ann The Long Call is a rich and deeply engrossing mystery with a whole host of new Cleeves’ characters led by the inimitable Matthew Venn. Just as the novel feels like a progression of Ann’s writing¨ this feels like the opportunity to create a wholly unique and ambitious event crime drama with another iconic detective at its heart We can’t wait to get started”

Vicki Mellor¨ Publishing Director Fiction at Pan Macmillan says
“We are thrilled that Ann’s superlative new novel The Long call has been optioned for television Ann’s unique ability to evoke landscape and create† compelling new characters is never more evident than with this novel¨ as we see a new setting in North Devon and a new lead in the wonderful Matthew Venn The happy news that Ann’s hugely successful partnership with Silverprint is continuing couldn’t be more welcome or come at a better time. We can’t wait to see how the series evolves onto the screen’

The Long Call by Anne Cleeves (Published by Pan Macmillan) 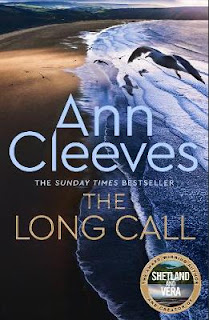 In North Devon, where the rivers Taw and Torridge converge and run into the sea, Detective Matthew Venn stands outside the church as his father's funeral takes place. The day Matthew turned his back on the strict evangelical community in which he grew up, he lost his family too.  Now he's back, not just to mourn his father at a distance, but to take charge of his first major case in the Two Rivers region; a complex place not quite as idyllic as tourists suppose.  A body has been found on the beach near to Matthew's new home: a man with the tattoo of an albatross on his neck, stabbed to death.  Finding the killer is Venn's only focus, and his team's investigation will take him straight back into the community he left behind, and the deadly secrets that lurk there.
Posted by Ayo Onatade at 14:18