The Return of Inspector Ghote 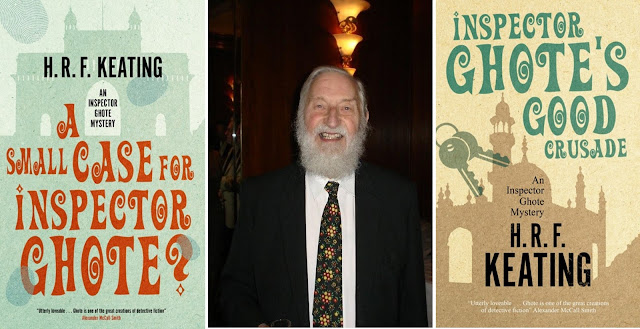 “The Inspector Ghote books … are quite exquisite, gentle novels that should find their place on any list of good crime fiction” – Alexander McCall Smith

I was delighted to hear from Publisher Kate-Lyall Grant that the late [Harry] HRF Keating’s acclaimed Inspector Ghote mysteries were returning from Canongate’s Severn House Imprint, which is a sister to the rapidly expanding Black Thorn division.

The last time I chatted with the late Harry Keating was over a decade ago, at a Crime Writers Association function where Andrew Taylor was awarded the Diamond Dagger for his contribution to the Crime Fiction Genre. Of particular delight was capturing [on photograph] fellow Diamond Dagger Authors, many of whom like Harry have sadly now passed away.

My report, and recollections of that time remain archived at Jeff Pierce’s RAP SHEET and can be accessed HERE

This [long overdue] re-issue made me smile, as over a flute of Champagne I told Harry Keating that evening how fond my father had been of his Indian Detective, Inspector Ghote. When he was homesick as a young psychiatrist in early 1960’s London, he would read Keating’s books as they reminded him of India. I never had the temerity to shatter my father’s illusion that at that time, the author had never set foot in India. I recall Harry Keating beaming at my anecdote, and my thanks to the author on behalf of my father, for the pleasure those wonderful books provided him, an escape of sorts from that rain and cold of London.

Today, tales of Indian Detectives, and exotic mysteries set there are celebrated with the work of Vaseem Khan and the MWA Edgar Nominated and CWA Dagger awarded Abir Mukherjee as well as many other writers with roots to that Asian Subcontinent that HRF Keating wrote about, with such affection.

Many paid their respects to Harry Keating when he passed away in 2011, of which fellow scribe Mike Ripley’s farewell [to whom he once referred Inspector Ghote as “the Maigret of Mumbai”] is memorable.

Ripley’s recollections can be read HERE from The Guardian while an excellent eulogy and reflection on his friendship with the creator of Inspector Ghote entitled “When Harry Met Ripley” with photographs can be accessed HERE.

Keating’s Inspector Ghote mysteries were recognised by the Crime Writer’s Association, in 1964 in the novel ‘The Perfect Murder’ [the first appearance of the Indian Detective] and in 1980 with ‘The Murder of the Maharajah’ both awarded Gold Daggers. The film team at Merchant-Ivory Production’s filmed ‘The Perfect Murder’ in 1998 to acclaim. It featured actors Stellan Skarsgård, Naseeruddin Shah, Ratna Pathak, Madhur Jaffrey, Amjad Khan, Annu Kapoor, Archana Puran Singh, Dalip Tahil, Dinshaw Daji, Johnny Walker, Mohan Agashe, Salim Ghouse and Directed by Zafar Hai. Produced by Ismail Merchant. With Music by Richard Robbins

It can be viewed online HERE

And now, thanks to Severn House, a new generation can wade though these vividly realised mysteries, so following my usual digressions; Kate Lyall-Grant gets to the point –

Dogged, determined Inspector Ghote of the Bombay Police Crime Branch has been delighting readers since his first outing in the 1960s, and Severn House is thrilled to announce that – starting February 4 – we’ll be republishing 21 of his adventures in digital, many for the first time.

The creation of multi-award-winning author H.R.F. Keating – who in his lifetime held many prestigious roles, including following in the footsteps of Agatha Christie to become President of the Detection Club – Inspector Ghote will delight readers of traditional mysteries that combine both interesting settings and well-drawn characters. Enjoy Alexander McCall Smith’s No. 1 Ladies’ Detective Agency books, Abir Mukherjee’s Sam Wyndham series set in Raj-era India and Vaseem Khan’s Baby Ganesh Detective Agency novels? We think you’ll love the sometimes shy and uncertain, sometimes bumbling Inspector Ghote too.
We’re launching the series with two contrasting reads: a series prequel, A SMALL CASE FOR INSPECTOR GHOTE? – Keating’s last novel before his death in 2011 – and INSPECTOR GHOTE’S GOOD CRUSADE, an early instalment from the 1960s. Paired together, the books provide fascinating insight into the evolution of Keating’s style over his writing career – as well as both being cracking reads.

In A SMALL CASE FOR INSPECTOR GHOTE?, H.R.F. Keating returns to the beginning of Ghote’s career, taking readers on a journey back to Ghote’s first official case as an inspector – which starts with the horrible discovery of a head in his office rubbish bin.

“After seven Harriet Martens books, Harry decided he had no more to say about his ‘Hard Detective’, but was itching to get back to his beloved Inspector Ghote. The trouble was that he had put all his India research into the black bin as an acknowledgement that he was abandoning India. Then it occurred to him that all he needed to do was to re-read his own books to recapture all those facts which had been in the research files. This he did before embarking on a new series which would start with the very beginning of Ghote’s time as an Inspector.”

A SMALL CASE was the second in the new series, but turned out to be Harry writing at his very best. Not only a vivid picture of life working for the prestigious and eclectic Crime Branch, but also Ghote’s home life with Protima, his characterful wife, and very new baby son, Ved, artfully woven into a fast-moving story, as well as a picture of that other India – the slums of Bombay. Sadly, by now in his eighties with heart problems, this was to be the last book he wrote but a truly splendid rounding off of a spectacular career.”

In INSPECTOR GHOTE’S GOOD CRUSADE, the good-hearted inspector investigates the murder of an American millionaire and philanthropist, but finds himself at the mercy of a selection of unsavoury, unreliable – and just plain annoying – witnesses, who all seem determined to lead him astray.
Sheila Keating writes:

“THE PERFECT MURDER, in which Ghote first appeared, was intended to be a one-off – India being just one more of the off-beat settings of his earlier crime novels – but when it won the Crime Writer’s Gold Dagger award and furthermore found an American publisher, which the previous novels had not, it became obvious that there would have to be a follow-up. Harry was delighted because he had begun to fall in love with India.

Although he had already done an immense amount of research, he realized there was a lot more to do. While he continued amassing Indian facts, he wrote another standalone title, but after that he was ready to plunge back into India with INSPECTOR GHOTE’S GOOD CRUSADE. On this, his second outing, the Inspector is established as the endearing, put-upon character who became a favourite with crime book readers.”

The editorial team at Severn House are excited to share these gems of detective fiction with you, so you can find out for yourself why Booklist thought Keating was “an immensely talented author” and Ghote “wonderfully witty”; why Publishers Weekly described Ghote as “a most appealing sleuth”; and why the late, great P.D. James thought Ghote was “an enchanting and engaging character”. 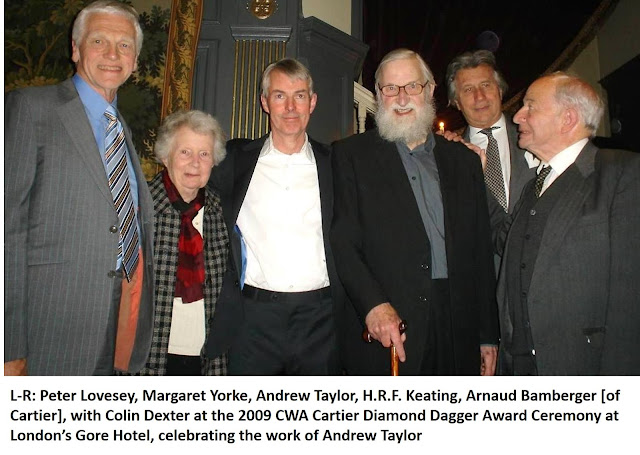 eBook schedule: Mark your diaries, and mark them well in ink and on screen.

Jul 2020:
THE SHERIFF OF BOMBAY
THE BODY IN THE BILLIARD ROOM

Aug 2020:
DEAD ON TIME
INSPECTOR GHOTE, HIS LIFE AND CRIMES

Paperback schedule:
Severn House is also publishing selected titles in high-quality trade paperback editions. Expected to launch in April 2020, with a publishing schedule of one title per month, the initial four books chosen are A SMALL CASE FOR INSPECTOR GHOTE?; INSPECTOR GHOTE’S GOOD CRUSADE; FILMI, FILMI, INSPECTOR GHOTE; and DOING WRONG.
It is great to see Inspector Ghote back.

I’ll leave the last word to his colleague and friend, writer, bibliophile and literary
commentator, the Talented Mr Mike Ripley –

It may seem that Harry was defying the old maxim that you should write about what you know and he cheerfully admits that “it was all going quite nicely without having to face the actuality,” but then one morning the actuality came calling. It was at the breakfast table with the morning post (those were the days!) that Harry opened a letter from Air India, which basically said: You’ve been writing about India, now come and see it and offered him a ticket, thankfully [also a] return one, on one of their flights to Bombay, as it was then. It was an offer Harry, in all conscience, could not afford to refuse. The Ghote books were known and read in India but still, the prospect of confronting the “actuality” of a world he had created in the safety of Notting Hill several thousand miles away, must have been daunting if not nerve-wracking. Harry spent the entire Air India flight there calming his nerves and rehearsing an appropriate speech for that dramatic moment when he landed and stepped for the first time on to Indian soil. It went, as he recalls, “Something along the lines of ‘One small step for Inspector Ghote …’” but in reality the speech was never delivered. As the Air India jet landed and Harry stepped on to the tarmac of Bombay airport, his first historic words were: “My God, it’s hot!” 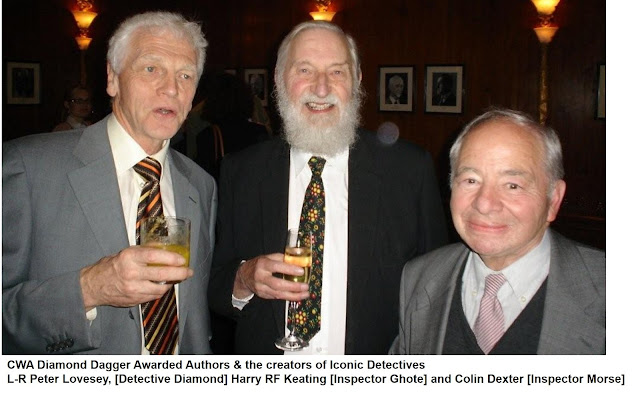 The legacy of Harry Keating also lives on as Sheila announces the annual HRF Keating Award at the Bristol Crimefest Convention, annually.