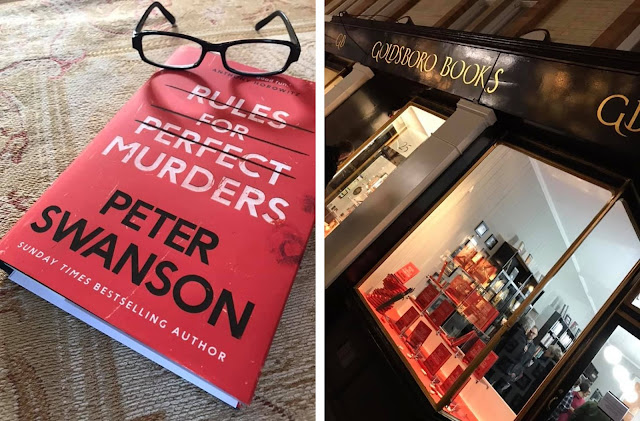 As the cloud of anxiety over COVID-19, the dreaded Coronavirus is starting to become ubiquitous; I decided to venture [cautiously] outside the safety of my imagination and into the ‘real world’, clutching a tube of hand-sanitizer, a train ticket and a paperback.

Every time I embark on a train journey, I think of Patricia Highsmith’s debut novel, the one made famous by Alfred Hitchcock in the early 1950’s [ and adapted for screen by Raymond Chandler]. The words ‘Open Channel ‘D’ always come to mind when I think of that film, due to my habit of littering my mind with trivia. I recall that Hitchcock cast one of my favourite actors, Leo G Carroll in a supporting role. The actor would later become legendary with his association to The Man From Uncle, playing the big boss Mr. Alexander Waverly. So, with the Uncle Theme in my mind I took my seat on the train. I looked at the faces in the carriage, and kept my distance from those Strangers on a Train.

It should be remembered that screen-writer Raymond Chandler, director Alfred Hitchcock and supporting actor Leo G Carroll were born in England; before heading to America where they flourished creatively. Patricia Highsmith however took the opposite journey across the Atlantic. Though born in America, it would England and the European continent that she would make her creative home, and her name - as one of the true greats of Crime and Mystery Fiction. 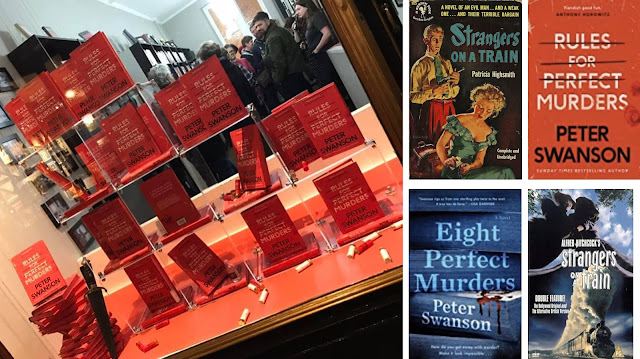 I consider it apt that Peter Swanson launches his 6th novel RULES FOR PERFECT MURDERS in England, because Highsmith’s debut novel features subtly as a plot device [of sorts] in his own extraordinary thriller. I also found great merit in his own debut novel THE GIRL WITH A CLOCK FOR A HEART. It made my top reads of that year – my review is archived at Jeff Piece’s THE RAPSHEET and can be accessed HERE

I read Swanson’s book last year, thanks to Angus Cargill, the renowned publisher / editor at Faber and Faber [and John Grindrod] as they knew it would appeal to my love of crime and mystery narratives. I mirrored the novel’s protagonist Malcolm ‘Mal’ Kershaw’s affection for the mystery genre. I even wrote a blogpost naming my own selection of golden age crime novels - archived HERE.

Swanson’s protagonist gets into trouble for writing his blogpost entitled Eight Perfect Murders [for the Old Devil’s bookstore he co-owns and manages]. The title of the blogpost is eponymous, as it’s the American title for Swanson’s book [from the esteemed William Morrow imprint of HarperCollins in the US]. 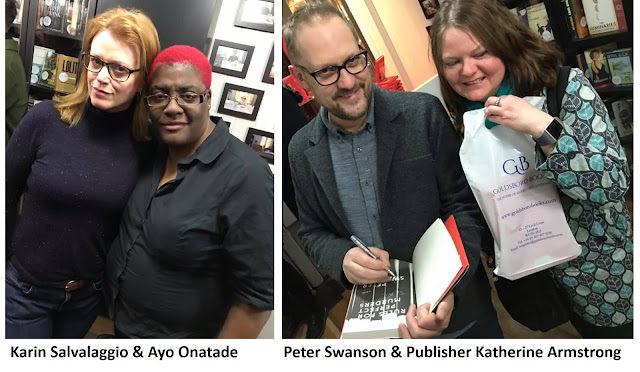 With my reluctance to proceed to places where people congregate in close proximity, due to my paranoia vis-à-vis COVID-19 Coronavirus, I avoided cinemas, theatres  and places of mass transit. This posed a dilemma. I had become desperate to view Parasite [directed by Bong Joon-ho and co-written with Han Jin-won] - but concerned about sitting in a packed cinema, in close proximity to others. I rejoiced at Mr Trump’s annoyance, at this film being awarded ‘best picture’ at the US Academy Awards 2020 [the first time a subtitled film from overseas received this accolade]. I enjoyed Trump’s annoyance as his jingoistic attitude was ruffled, like an orange syrup-of-figs caught in a gale. The Korean director’s previous work on both SNOWPIERCER and THE HOST had been extraordinary.

I planned to view PARASITE on a big screen in London, BUT for an early matinee performance, hoping there would be very few in the auditorium within coughing distance. My planning and luck were in, as there were only two others at the screening, and they sat at the back while I took a seat at the front.

After the film ended, I needed a stiff drink.

I found a bar and thought about the film as I sipped Scotch, chased by Guinness. It was well-constructed and complex, but very accessible. It provoked much thought and made me laugh like a drain, before it turned all Darren Aronofsky with the horror of the finale.

I quaffed my beverages as the bar started to fill and made my way to Goldsboro Books in Covent Garden to celebrate the launch of RULES FOR PERFECT MURDERS. I enjoyed the book trailer / clip commissioned by Faber and Faber for this extraordinary novel as it sets the mood in a quirky manner –

On arrival, I was delighted that David Headley and his team decorated the store accordingly for the party, and Faber and Faber providing ample wine, beer and nibbles.

Firstly, I met-up with Angus Cargill and his publishing team. “I knew you’d enjoy Peter’s book,” he said as I thanked him for an early read and invite to the launch.

I enjoyed teasing Angus about the inclusion of the cat ‘Nero’ in the book, as despite being a dark read, it will appeal to the gentler Cat-Mystery Crowd.

Peter Swanson’s sixth novel is a love letter to readers of crime fiction, exploring the grey area that separates fiction from reality. It is a literary novel [with a lowercase ‘L’], luring the reader into the mind of those obsessed by the allure of the library, the dark shadows of human nature and of the elegancy of words, constructed to tell a story.

We have reference to Dame Agatha Christie, Patricia Highsmith, James M Cain, Donna Tart, Ira Levin, John D Macdonald among many others outside the scope of investigation. And Kershaw has a cat named after the renowned Rex Stout character to boot. A loner, he finds solace in books, especially now alone after the tragic death of his wife. As the narrative unfurls, classic books are referenced from the shelves of ‘Old Devils’. Mulvey and Kershaw explore the work that the killer maybe using as a map, to navigate these murders. 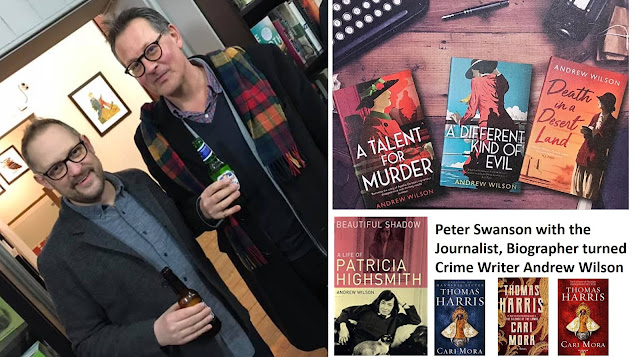 I was pleased to find myself in conversation with Andrew Wilson a former journalist now an exceptional crime-writer who casts a fictional Agatha Christie in a wonderful series of golden age crime novels. Though it is his extraordinary biography of Patricia Highsmith BEAUTIFUL SHADOW that still haunts me. I consider Highsmith’s character Tom Ripley to be the precursor to Thomas Harris’ Dr Hannibal Lecter of Baltimore and Florence.

I always greet Andrew Wilson with - “I love the smell of turpentine in the morning” spoken in a Tom Ripley manner which makes him smile.

Between sips of wine, I enjoyed chatting to editor Katherine Armstrong, where we discussed the award-winning books penned by her author Chris Whittaker. It was good seeing the ubiquitous and hard-working Ayo Onatade in fine form, burning the candle at both ends in her day-job in the legal business, and in her evenings critiquing / blogging about crime fiction. Though few know that her deepest passion is basket weaving, a craft she rarely mentions in public.

I was delighted to learn that Karin Salvalaggio is writing fiction again. I’ve known Karin for some time. She provides literary commentary for http://bookanista.com as well as being an acclaimed novelist in her own right. I have her work in my vast collection; currently in storage due to the immensity of my appetite for reading and collecting books. 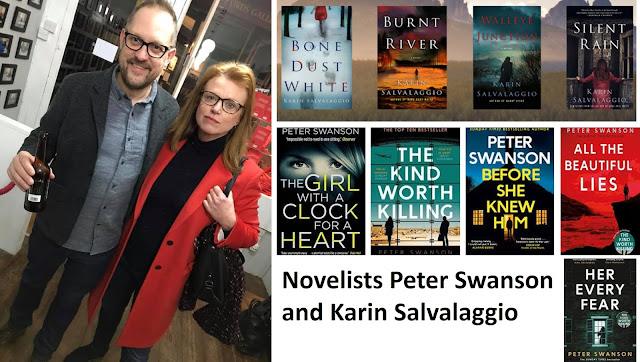 I find writers with the most interesting lives produce more insightful narratives than the fresh-faced youths in their twenties; who clutch their MFA certificates like facemasks made in Wuhan.

For more information about this interesting American novelist in London, Click HERE

Writers are cautious talking about their works in progress. I know I am. I was therefore delighted [and intrigued] with the avenues of thought that Karin’s mind was wandering. I look forward to seeing those thoughts crystallise and form into a commercial narrative in due course.

Her thoughts and research have narrative legs in my opinion, and would find interest from others, keen to explore the themes she was traversing.

Soon it was time to listen to Angus introduce Peter Swanson, and welcome us to the launch party, which I captured in this 3.5-minute clip, recorded in my usual gonzo style, angled to reflect the tilted axis of the reality we see around us, that disturbing parallax view.

So time for more wine, and conversation.

I spoke with Peter Swanson, telling him how much I enjoyed his sixth novel, made special with the references to Crime and Mystery writing, and of writers. I roared laughing recalling one of his characters referring to Thomas Harris as “….a literary pervert….” Peter was aware of my fondness for the writings of the creator of Dr Hannibal Lecter, of John Hopkins, Balitmore [and Dr Fell of Florence]. I remarked mischievously stating that his latest work Rules for Perfect Murders shared something in common with Thomas Harris’ Cari Mora. Peter looked a trifle wiffled.

“Cari Mora like Rules for Perfect Murders, are sixth published novels from both of you, though you are far more prolific than Thomas Harris.”

The relief on Peter’s face was visible.

“I know no one that loves Cari Mora as much as you do,” he said.

“I know, it’s so weird,” I replied explaining that I had been gently ridiculed in many quarters about my enthusiasm for Thomas Harris and Cari Mora. I told him how I had been lobbying my fellow judges at George Easter’s Deadly Pleasures Magazine for Cari Mora to be considered as one of the finest crime thrillers of the last decade. Peter explained that he hadn’t read Cari Mora, but was aware of my enthusiasm for the book.

“You seem to be in the minority,” he said. 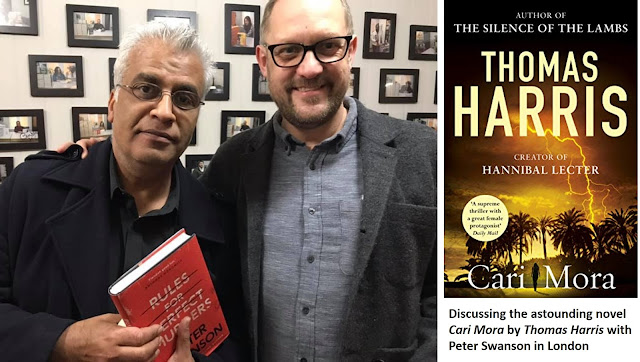 I just laughed as my admiration for the writing of Thomas Harris has no perimeter.

Anyway, we talked some more, laughed some more but before too long it was time to pass my thanks to Angus Cargill of Faber & Faber as well as David Headley of Goldsboro books for a fine launch party.

It may not be a Cari Mora, but it is tremendous fun, especially for the advocates of the Mystery Genre. It’s very, very good. 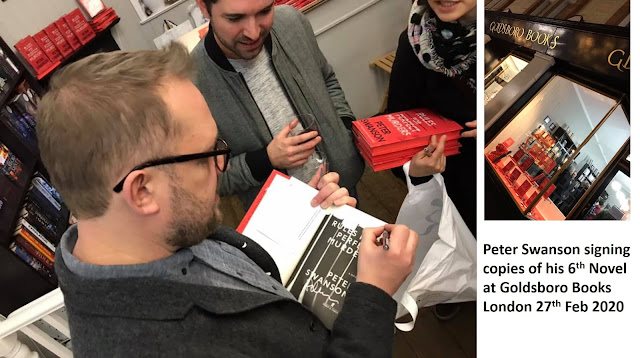 Shots Magazine would like to thank Angus Cargill and David Headley for hosting a wonderful launch party. 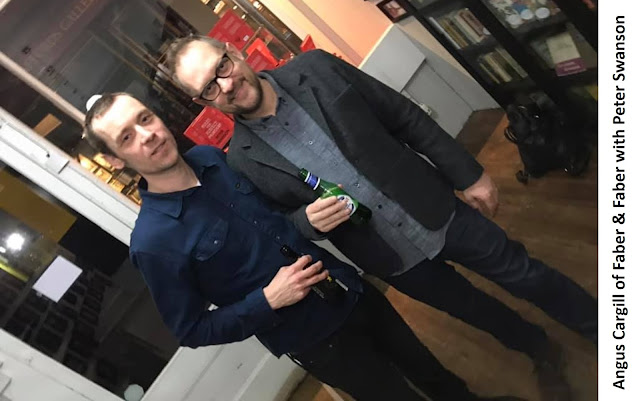