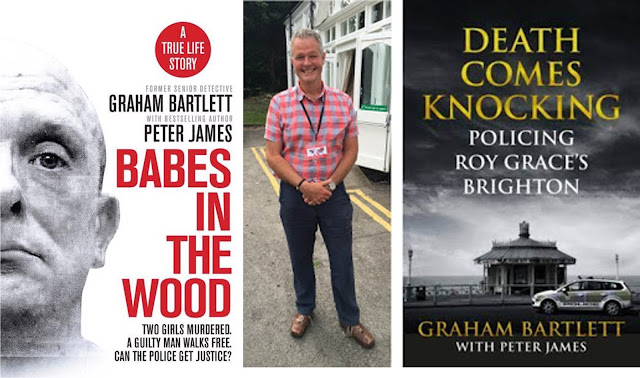 Shots Magazine are delighted to see the return of Graham Bartlett, following up his insightful ‘DEATH COMES KNOCKING’, a non-fiction crime work that looks back over his career as a Sussex Police Commander. That work was written in-conjunction with the award-winning [and best-selling] Peter James, as there is a link to the fictional world of Roy Grace.


Peter James is favourite writer of mine, a former Film Producer who’s writing traverses Horror and Speculative Fiction but best known for his police procedurals set in a dangerous Brighton, as well as international excursions that Roy Grace has to undertake in his investigations. It was excellent to hear that this singular creation is being adapted for TV. In fact, 2020 appears an important year for Peter James, as we reported at last year’s Christmas Lunch that the author generously organised – more information about what the year has in store for Peter James’ readership HERE 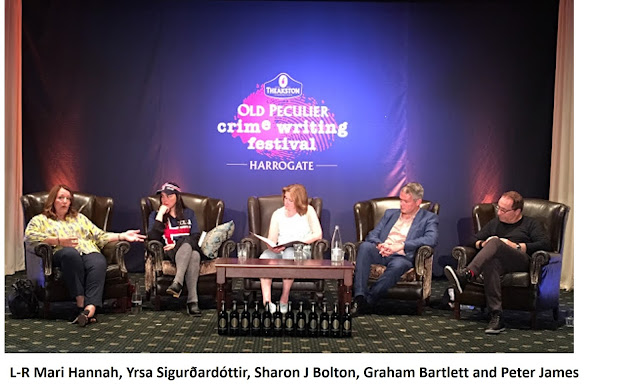 So as Bartlett’s Babes in the Wood [the follow-up to Death Comes Knocking] has been unleashed, what’s in store?
On 9 October 1986, nine-year-olds Nicola Fellows and Karen Hadaway went out to play on their Brighton estate. They would never return home; their bodies discovered the next day concealed in a local park. This devastating crime rocked the country.
With unique access to the officers charged with catching the killer, former senior detective Graham Bartlett and bestselling author Peter James tell the compelling inside story of the investigation as the net tightens around local man Russell Bishop. The trial that follows is one of the most infamous in the history of Brighton policing – a shock result sees Bishop walk free.
Three years later, Graham is working in Brighton CID when a seven-year-old girl is abducted and left to die. She survives . . . and Bishop’s name comes up as a suspect. Is history repeating itself? Can the police put him away this time, and will he ever be made to answer for his past horrendous crimes? Both gripping police procedural and an insight into the motivations of a truly evil man, Babes in the Wood by Graham Bartlett with Peter James is a fascinating account of what became a thirty-two-year fight for justice.
Read More from Pan Macmillan HERE
This link tells more from the author –
Graham kindly provided Shots Readers, a little more background to his change from Police Officer, to Investigative Consultant and Writer -
When I hung up my epaulettes after thirty years of policing, I loved writing and had many plans but none were to become a best-selling crime writer. That was all Peter James’ fault when he set me the most extensive and challenging piece of homework I’d ever faced.
‘Write a non-fiction with me,’ he said. ‘Linking your career with the Roy Grace stories,’ he said. ‘And you’d damned well better make it worthy of my name,’ he joked.
From the age of eighteen I’d written nothing but witness statements, incident reports and, as the commander of Brighton and Hove police, pleading submissions against the cuts. So, when WH Smith customers’ “greatest crime author of all time,” threw down that particular gauntlet I picked it up with trepidation.
It was the hardest yet most fulfilling journey I have ever embarked on. Rejection after rejection because my voice (what even was that?) was too policey only spurred me on until finally, after three years and more drafts than I can bear to remember, Death Come Knocking – Policing Roy Grace’s Brighton was published. A week at number 7 in the Sunday Times Top Ten earned me the label of “Best Seller” but, more importantly, I caught the bug. 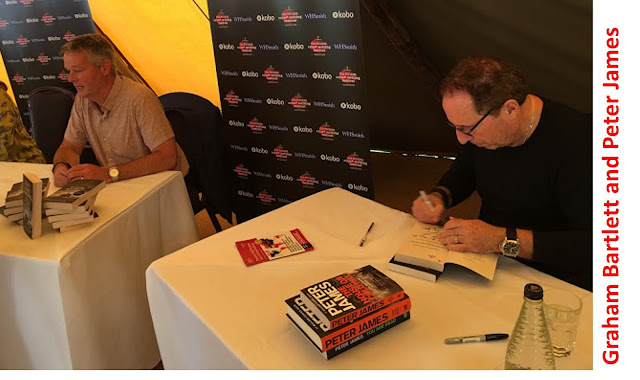 Our second book, Babes in the Wood – published in February 2020 - took even longer to write. It tells the inside policing story to how, after thirty-two years and three trials, child killer Russell Bishop was finally brought to justice.
Having been wrongly acquitted for killing nine-year-olds, Karen Hadaway and Nicola Fellows, in 1986, Bishop went on to kidnap and to get within a hairs breadth of killing a seven-year-old girl in near identical circumstances three years later. That was the first major incident I investigated and it formed a compelling chapter in Death Comes Knocking. However, two weeks before our final deadline, a court order crashed in to my inbox banning us – and the world’s press – from publishing anything about Bishop as he had been re-arrested for Karen and Nicola’s murder. Despair quickly turned to elation when it hit me that the relaxation of the double jeopardy safeguards – which stopped acquitted suspects being re-prosecuted – and the advance of DNA science meant that finally the little girls’ families had a chance of justice.
Peter and I decided to write the whole story, from the girls going missing to what we then hoped – and were proved right – would be guilty verdicts. We would tell it using first-hand accounts from the officers who answered Karen’s mum’s desperate 999 call, to the officer who found the bodies and every senior detective – and many junior – who had anything to do with the cases. – including me. There was a lot of hanging around for the re-trial but eventually we interviewed those key cops and finished the book, busting five myths about the case in the writing.
Despite being a career-detective, I have always tried to find the good in people. Most killers, rapists and robbers I have met have at least a flicker of humanity if you dig deep enough. The vast majority I could describe as being “people who have done evil things,” rather than “evil people.”
Bishop was the exception. He is wicked to the core.
His crimes, depraved, brutal and unforgiveable, speak for themselves but we saw in his interviews and in court a living, breathing psychopath. How else do your describe someone who tries to gas-light wizened and wily interviewers into believing a story that flip-flops around the evidence on a minute by minute basis that, were the case not so serious, it would be laughable? Who else would brazenly defend sending sexually explicit letters to a thirteen-year-old girl – and he knew that – by saying he thought she was fifteen? Only someone like Bishop could be so dismissive of a grieving father’s decades-long anguish that he could accuse him of watching a video of her being raped then later sexually assaulting and murdering both her and her friend. If Bishop were ever released, children would be in mortal danger.
As well as writing I advise Peter James, and now many others, on achieving pinpoint accuracy in their police procedure and characters. Plenty of former cops offer themselves up to do this but not many are published authors. Few understand the narrative process and can meld a story with authentic procedure. Combining my years as a detective, firearms commander and city police chief with my new career as an author, I put the plot first and work the authenticity into that. I share the secrets of how crimes are actually investigated and solved, from the corpse to the courtroom and help shape the characters who do that.
That makes me a real pain to watch TV drama with or to read ill-researched crime fiction. It’s unfair on other authors that I use Peter James and Mark Billingham as my benchmarks of what can be achieved, but many put the hard yards in and produce great – authentic – novels. Elly Griffiths, Dorothy Koomson, E V Seymour and Adam Croft are just a few of those whose books I fly – wince-free - through. Sometimes though, I like to avoid any chance of critiquing when I should be enjoying and my two favourite authors who write in a world I know nothing about are Gregg Hurwitz (Orphan X series) and Deon Meyer (Benny Griessell series). I doubt Gregg’s world of deniable assassins hung out to dry by a corrupt US government exists (Naïve? Moi?). Likewise, Deon’s South Africa Police Service is nothing like the provincial UK force I am familiar with so I can just read and enjoy – as the authors intended.

I’m moving away from non-fiction for now and am editing my first novel. Supported wonderfully by my agent Isobel Dixon of Blake Friedman and the lord and master Peter James, I have written a story I’m quietly proud of which shows the horror of what happens when policing is cut so much that state-sponsored vigilantism takes over. Watch this space for more news on that.
So, we’d recommend grabbing a copy, especially as this weird COVID-19 is in the air, and many turning to books while we isolate ourselves.
This link tells more HERE
Babes in the Wood – by Graham Bartlett with Peter James is published by Pan and available from Amazon, WH Smiths, Waterstones, Asda and other good bookshops.