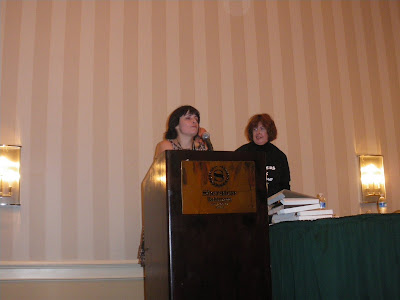 I am constantly been told that there is an extra buzz about Bouchercon this year and I can believe it. The book bags have been over whelming welcomed! I mean what can you say when for example one of the books in the bag is the collection of Laura Lippman's short stories Hardly Knew Her (which has only just been published) and John Harvey's Frank Elder books are also being given away. The bar has been packed from first thing in the morning till late at night. The hospitality suite has been open since this morning and is for the use of everyone not solely the authors and people moderating panels. 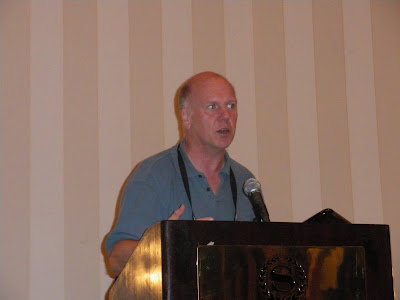 This evening they held the opening ceremony. To say that the room was packed is putting it mildly. It was standing room only. The awards that were being given out were the CrimeSpree Awards, The Macavity Awards and The Barry Awards.
The winners of the Macavity Award were:-
Best Mystery Short Story - Please watch Your Step by Rhys Bowen (The Strand Magazine)
Best Mystery Non-Fiction - The Essential Mystery Lists: For Readers, Collectors and Librarians by Roger Sobin (Poisoned Pen Press)
Best First Novel - In the Woods by Tana French (Hodder Stoughton/Viking)
Best Mystery Novel - What the Dead Know by Laura Lippman (Morrow)
Sue Feder Memorial Historical Mystery - Mistress of the Art of Death by Ariana Franklin
All the winners bar Ariana Franklin were on hand to accept their awards. Since I know and recently interviewed Ariana Franklin for Shots I proudly accepted the award on her behalf. The Macavity Awards were presented by Janet Rudolph the editor of Mystery Journal International and are voted on by members of Mystery Readers International.
The winners of the Barry Awards were -
Best Novel (Published in the US in 2007) - What the Dead Know by Laura Lippman (Morrow)
Best First Novel (Published in the US in 2007) - In the Woods by Tana French (Viking)
Best British Crime Novel (Published in the UK in 2007 but not necessarily written by a British Writer or set in the UK) - Damnation Falls by Edward Wright (Orion)
Best Paperback Original - Queenpin by Megan Abbott (Simon and Schuster)
Best Thriller - The Watchman by Robert Crais (Simon and Schuster)
Best Short Story Award - The Problem of the Summer Snowman by Edward D Hoch. (EQMM) This was the second year in a row that Ed Hoch has won this award and a rather sad win as well. Ed Hoch sadly passed away in January 2008 and he was known for his short stories.
The CrimeSpree Awards were also given to the following -
Favourite book of 2007 - The Unquiet by John Connolly (Atria)
Favourite ongoing Series - Inspector Banks by Peter Robinson (Morrow)
Favourite First Novel - Big City, Bad Blood by Sean Chercover (Morrow)
Favourite Anthology - Expletive Deleted by Jennifer Jordan (Bleak House Press)
favourite Comic Book Writer - Brian Azzarello
The Anthony Awards are due to be given out on Sunday at a Brunch. 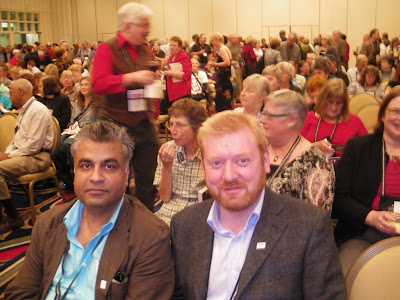 Thanks for the report(s). A lot of good representation of women in the awards so far.

You're welcome, Naomi. Are you at Bouchercon yourself?

I'm here attending virtually in California (!). I'll be recommending a link to this site on DorothyL.

Thanks, Naomi. I'm here in the UK getting the updates and wished I was attending. But, hey, you can't have everything.
And thanks for the recommendation.
take care
Mike