The author of Gomorrah, the book about the Naples gang wars that was turned into a prize-winning film, could be dead by Christmas along with his bodyguards, according to a well-placed supergrass. Roberto Saviano, the 29-year-old journalist whose novel-like chronicle of the brutal rule of the Camorra has sold more than a million copies, has been under heavy police protection for two years. - hat tip: Story in The Independent
Roberto Saviano has been forced to live a hard life, an absurd one. We need to make him feel that he is not alone," Italian president Giorgio Napolitano wrote in a letter addressed to the Repubblica newspaper. "The threats against the writer from the most ruthless Camorra clan are a challenge not only to culture, but to the civilized conscience of the country itself," said Napolitano. "The State must do its part as a guarantor of security and legality. But everyone must understand that what is at stake are the fundamental values of freedom and national dignity. That the prestige of a democratic Italy in Europe is at stake." 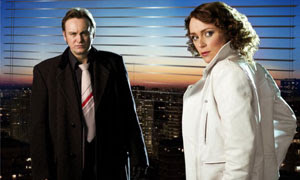 back, policing the streets in his politically incorrect and loud-mouthed style. Sassy Alex Drake, whom Hunt shares a fiery working relationship with, is by his side, desperately trying to keep him in line. Though no nearer to getting back to her daughter, Alex believes she is suspended in time and finally understands how the world around her works. But, when she starts hearing news from 2008, she realises nothing is as it seems. Clinging on to fast fading hope, she discovers she may not be alone in her predicament. It seems unlikely, but is there someone in 1982 who can help her?

Brushing off his recent torture, Adam is already leading the team on a major terrorist threat. A British soldier, Private Andy Sullivan, has been kidnapped by al-Qaeda and they are threatening to kill him unless all Remembrance Sunday services are cancelled.

There's also a new Spook on the block when a secret assignation between MI5 and the Russian intelligence services (the FSB) brings Harry's old protégé, Lucas North, back into the fold after eight years languishing in a Russian prison. Harry is thrilled to have him back, but does Lucas have the necessary skills to rejoin MI5 at the top level? And, more importantly, whose side is he really on? 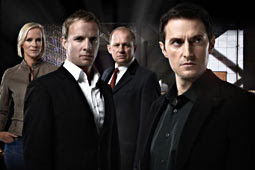 Harry's opposite number at the FSB, Arkady Kachimov, reveals they have discovered the identity of the MI5 officer Harry posted to Russia on a secret mission – none other than Ros Myers. In the knowledge that the FSB are onto her, the prodigal daughter of Harry's team begins her dangerous journey back to Britain.

Things get worse for the team when they learn from Ros's Russian intelligence that al-Qaeda is planning to detonate a bomb during a Remembrance Service, and the bomber is supported by the Chechens with links to Russia. With thousands of civilians at risk, can the team locate the car bomb and rescue Private Sullivan before it is too late? When Adam takes matters into his own hands, the team hold their breath as his race against the clock becomes a desperate fight for survival.
*********************************************************************************
With rumours running rife in the publishing industry about lack of advances this piece of news comes in from the Frankfurt Book Fair:
Bestselling thriller writer Matthew Reilly has moved to Orion in a “major” deal .Orion fiction publishing director Jon Wood has acquired two books from the Australian writer, whose previous novels, including this year’s hit The Six Sacred Stones, have been published by Pan Macmillan.
His first Orion novel will appear in spring 2010 and will be accompanied by a UK author tour and what the publisher promises will be “one of the biggest consumer campaigns of that year”. Reilly said: “As everyone in publishing knows, I don’t change publishing houses often or lightly and Orion, having shown a consistent interest in me for some time, made a very compelling pitch.” He said he looked forward to working with Orion “as we attempt to take my books to the next level in the UK”.
Wood said: “Reilly’s brand of imaginative concepts, powerful storylines and non-stop action should take him right to the top over here in the way it already has Down Under. He appeals right across the commercial spectrum. We are very excited about his future with us.”
The sum involved in the deal was undisclosed, but Wood said: “We have high ambitions for Reilly and the advance reflects that.”
Posted by Mike Stotter at 12:43

Email ThisBlogThis!Share to TwitterShare to FacebookShare to Pinterest
Labels: spooks/ashes to ashes