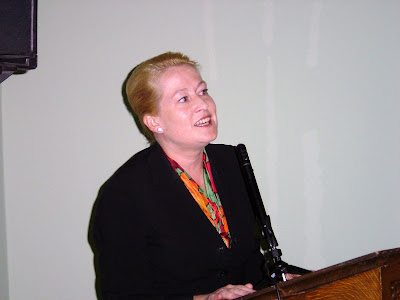 It was third time lucky for Laura Wilson has she picked up the CWA Ellis Peters Historical Crime Award 2008 for her novel Stratton’s War (Orion). The event was held in London's Fitzrovia last night (27th October) which was attended by fellow writers, critics, and industry people. David Shelley, editor at Little Brown publishers and Janet Laurence (Ellis Peters judge and author) presided over the events, and it was Janet's honour to read out the results.

This year's list was a very strong one, and when asked if I could predict the winner, it was impossible. The other shortlisted novels were: The Death Maze by Ariana Franklin (Bantam Press); A Quiet Flame by Philip Kerr (Quercus); Death on a Branch Line by Andrew Martin (Faber); Revelation by C J Samson (Macmillan) and Bleeding Heart Square by Andrew Taylor (Michael Joseph).

Congratulations to Laura and to the other authors.

A slide show of the photos taken that evening will be over on the main Shots Ezine shortly.

Very well deserved, it is an excellent book. I am not one for pigeonholing books into genres, but this book is a very good novel, as well as having a good crime-fiction element. Delighted to read it has been given the recognition it deserves.