One the most difficult conversations I had during Bouchercon Baltimore last month was with US novelist Louise Ure. We took some time out to talk about our friend, antique dealer and writer of the Molly Doyle mysteries, Elaine Flinn. We spoke at how much we missed her not being with us at . We also knew that she was terminally ill, so we were also worried about her and how her family would cope during this difficult time. There was a terrifying finality in our conversation as we knew that the prognosis was not good, but we agreed that Elaine was a fighter and we would pray for her and her family. 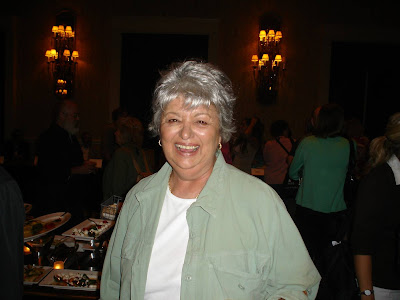 You see Louise Ure’s debut novel “Forcing Amaryllis” was first introduced to me by Elaine Flinn during the inaugural ITW Thrillerfest held in the summer of 2006 in . This was typical of Elaine, always pushing other people’s work to writers, reviewers and readers. She was always at the centre of the laughter at any conference.

So how did I first meet Elaine Flinn?

Louise Ure like myself, with fellow critics Dave Montgomery and Larry Gandle were judges for the inaugural ITW Thriller Awards, hence had spent much time emailing each other during the judging process. Though I knew David and Larry well (having met up with them at Bouchercon in 2003), I had never met Elaine Flinn. After a most difficult journey from London; when I arrived at The Arizona Biltmore Hotel I walked into the bar and the first thing I heard as “Ali’s arrived!” and it was Elaine Flinn who sprang up from her chair and gave me a huge hug. My travel stress just evaporated with that embrace. I enjoyed hanging out with Elaine during that weekend. She was so full of energy, fun and her laugh infectious. Just thinking about her today puts a smile on my face. At Thrillerfest, she even insisted on me joining her table at the ITW awards banquet with Larry Gandle and David Montgomery. She saved a seat for me and placed me next to one of my literary heroes F. Paul Wilson [as she knew that ‘The Keep’ was one of my all-time favourite novels]. She was just so thoughtful.

She championed many writers, helped people - but the greatest memory I have was when in with Mike Stotter the following year for the second Thrillerfest Conference. I pulled out a copy of “Deadly Vintage” a terrific mystery featuring her alter-ego Molly Doyle. 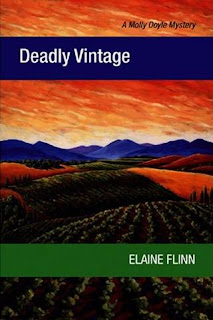 I asked Elaine if she would sign it for me as I absolutely loved the book. In typical Flinn fashion she said “Oh that’s so sweet, but I thought you only read noir?” I told her that “Deadly Vintage” was just wonderful, and she blushed and beamed replying simply “Thank you Ali, but more importantly thank you for introducing me to Nick Stone, you were right, “Mr. Clarinet” was one of my favourite books.” Again, typically Elaine was always supporting other writers. 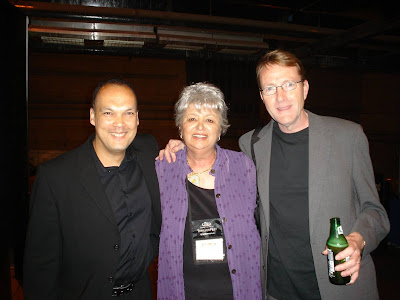 My editor at January Magazine, novelist Linda Richards summed up her work robustly.

"A former area antiques dealer, Flinn dreamed up a sleuth with whom she had a great deal in common. Carmel, California, antiques dealer Molly Doyle was introduced in Dealing in Murder. Flinn’s 2003 debut novel was nominated for the Agatha, Gumshoe, Barry, and Anthony awards in its publication year.
In 2004, Flinn’s follow-up novel, Tagged for Murder, won the Barry Award. Two more Molly Doyle novels would follow--Deadly Collection in 2005 and Deadly Vintage just last year. And though all of Flinn’s novels were well-received and her Molly Doyle novels earned her a dedicated following, the author was nearly as well known for her vibrant presence in the mystery community.
Flinn was one of the founding members of the Anthony Award-nominated blog, Murderati. It was during her time at Murderati that Flinn developed the Evil-E persona for which she came to be so well-known."

Elaine Flinn passed away on Saturday 25th October 2008 from medical complications due to pneumonia and cancer. She will be remembered by many of us who had the pleasure of reading her work, as well as just being in her presence.

I only had the pleasure of meeting Elaine the once at the 2007 Thriller Fest when we gathered for an evening meal. Of course I had known her by reputation and her writing. The meal was one of the highlights of the weekend, very informal, very funny and, needless to say, very alcoholic, which I’m sure you can gather from the photo. I’m sure each of us who attended came away with something memorable from the evening. I found Elaine a very gracious and witty person. It is a shame that or paths will never cross again. RIP Elaine. 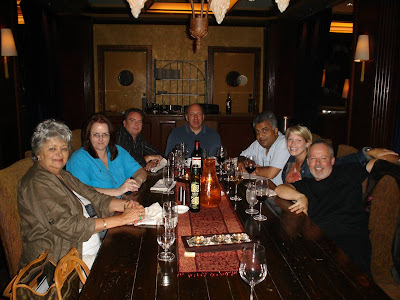 Lovely piece, Ali. That picture of Elaine, Lee Child and me brings back fond memories. Although I only got to know her (and that, mostly, through email) from last year, I did love her dearly.

I last heard from her on October 11th. She told me she was voting for Obama because she didn't want Sarah Palin getting anywhere near the nuclear codes.

A wonderful, magical person I feel blessed to have known.

Thanks for the piece, Ali.

Elaine's dead? This is terrible. I didn't even now she was sick. We became friends when we served together as judges for one of the Thriller awards. I don't think I've ever met anyone who loved people more than Elaine. Very sad.