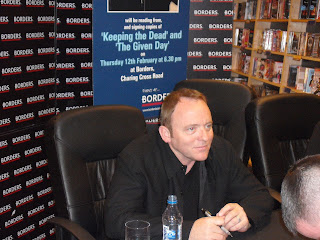 What do you get when you have two well-knowAmerican crime writers in the same room together? The answer is a well-attended event at Borders along Charing Cross Road.
Borders hosted an evening with Dennis Lehane and Tess Gerristen on Thursday 12 February 2009, where they were interviewed by Selina Walker, Publicity Director at Transworld. In the presence of an extremely large and appreciative audience Dennis and Tess answered a variety of questions on their books, their writing, (including how and why they became writers) research and on Dennis writing involvement with The Wire. Dennis spoke at some length about writing. The Given Day and how far he decided to go back. He also talked about having the opportunity to include real life characters in his book such as Babe Ruth and Calvin Coolidge (the 30th President of the United States) to name a few. The Given Day is written from the perspective of two different men and centres on the Boston Police Strike of 1919 at a time when fiercely held convictions about work and freedom underwent enormous change at great cost to human life and relationships. It is also a story about fathers and their sons, love and disloyalty, optimism and unfairness. It's also a dream of salvation and victory of the human spirit. The Given Day contains considerable moral gravity. Dennis confirmed when asked whether or not he would be writing again about the period in The Given Day explained that he would but that he wasn’t certain where he would start from. Nevertheless, he commented that it might be set in the 1920s and he explained – “who wouldn’t want to write about Tommy Guns? “

Tess also spoke about her latest novel Keeping the Dead (US: The Keepsake) and her interest in archaeology which drew her to writing the story. In Keeping the Dead, when medical examiner Isles studies an X-ray scan of Madame X, which everyone assumes is a newly discovered Egyptian mummy, at Boston's Crispin Museum, she realizes the mummy isn't a priceless artefact but a recent murder victim, gruesomely preserved. Rizzoli focuses the police investigation on Dr. Josephine Pulcillo, a young archaeologist recently hired by the museum who may have something to hide. More victims soon turn up, including a tsantsa (shrunken head) in a hidden museum chamber and a corpse resembling a well-preserved bog body in Pulcillo's car. After Pulcillo disappears, Rizzoli and Isles must scramble to find her before she becomes another trophy in the killer's growing collection. She also spoke about mummies and shrunken heads and produced to the amazement of everyone “Fred” her shrunken head.

Tess spoke about her book The Bone Garden a standalone historical novel and what prompted her to write the book. The Bone Garden, is a tale of gruesome murders takes place primarily in 1830’s Boston and includes a character based upon Dr. Oliver Wendell Holmes.

Both authors also found time to give advice to would be writers. One comment that Dennis made which I felt was particularly relevant to prospective writers is when he said, “if you don’t read then don’t write” 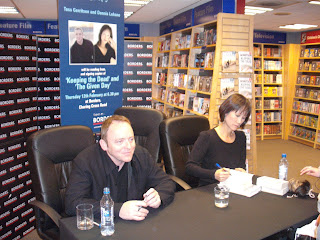 Both Tess and Dennis also answered questions from the audience. One question that Dennis was when asked was about Patrick Kenzie and Angela Gennaro. Fans of the series will be pleased to learn that Dennis confirmed that he was writing a new book featuring the two of them. He was asked why he stopped writing about them and he explained that they (i.e. the characters) stopped talking to him just about the same time President Clinton left the White House and only recently whilst he was driving and when it seemed that Barack Obama was just about to become President that they started to talk to him again. Dennis Lehane also spoke about the luck he had had with his books (Mystic River and Gone Baby Gone) which had been made into extremely well received films. He explained that he had a lot of involvement with Mystic River but in contrast when it came to Gone Baby Gone he had had very little involvement with it. He had been amazed by what director Clint Eastwood had done as well as what Ben Affleck had done with Gone Baby Gone despite the fact that it had been Ben’s first directed film.
Both authors also when asked acknowledged the influence of Stephen King. As they explained he was very very supportive towards writers and used to before he got to be very busy read and write blurbs for many of them.

At the end of all the questions both authors spent time signing books for the audience. It was an incredibly well attended event which was thoroughly enjoyed by all of those in attendance.
Posted by Ayo Onatade at 01:11