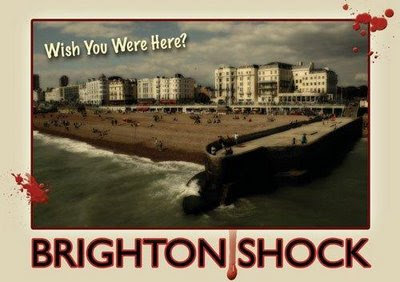 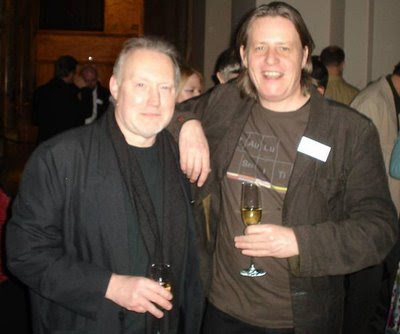 I was fortunate to bump into Stephen Jones last week at the Orion Author Party and got chatting with him and Novelist Paul McAuley about the World Horror Convention. Stephen kindly sent me an update for Shots Readers [Pictured above with Stephen Jones on Left] about the first Guest-of-Honour.

World Horror Convention 2010 is delighted to announce that our first Guest of Honour is acclaimed fantasy, horror, science fiction and young adult author, TANITH LEE. Since the publication of THE BIRTHGRAVE by DAW Books in 1975, she has published around ninety novels and collections, and almost 300 short stories. Although well-known for her fantasy novels, Tanith got her start in the legendary PAN BOOK OF HORROR STORIES, had a huge retrospective collection published by Arkham House, DREAMS OF DARK AND LIGHT, and is a regular contributor to WEIRD TALES and numerous horror anthologies. A Nebula Award and Guardian Children's Fiction Award nominee, and winner of the British Fantasy Award, two World Fantasy Awards, and two Spanish Gilgames Awards, we are delighted to welcome her as our first Author Guestof Honour. For more information about Tanith Lee, please go to the convention website.
Other writers, artists, editors and publishers already registered as attending World Horror Convention 2010 include Pat Cadigan, RamseyCampbell, Centipede Press (USA), Peter Crowther, Ellen Datlow, ChristopherFowler, Jemma Press (Greece), Stephen Jones, Allen Koszowski, Tim Lebbon, Brian Lumley, L.H. Maynard & M.P.N. Sims, Gary McMahon, Mark Morris, LisaMorton, Yvonne Navarro, Kim Newman, Reggie Oliver, OXY Publishing (Greece), Sarah Pinborough, David Pirie, PS Publishing (UK), David A. Riley, Robert Shearman, Michael Marshall Smith, Snowbooks (UK), Alexandra Sokoloff, Tartarus Press (UK), Telos Publishing (UK), Conrad Williams, and F.Paul Wilson, amongst many others.
Celebrating its 20th Anniversary, The World Horror Convention will be held over March 25-28, 2010, in the historic Victorian seaside city of Brighton, on the picturesque south coast of England. This is the first time that the event will have been held off the North American continent. The theme is "Brighton Shock! - A Celebration of the European HorrorTradition from Victorian Times to the Present Day", and the convention will host numerous panels, talks, presentations, readings, workshops and displays devoted to horror, macabre, mystery and thriller fiction and art in all its varied and fearsome forms. The venue will be the historic Royal Albion Hotel, which dates back more than 180 years and is situated directly opposite Brighton's iconic Palace Pier and a stone's throw from the beach. There are plenty of alternative hotels and Bed & Breakfasts in the immediate surroundings, catering for all budgets, and Brighton is filled with restaurants, wine bars and clubs. Antiquarian shopping precinct The Lanes, the Sea Life Centre and the world-famous Royal Pavilion are also within easy walking distance.
Brighton has direct transport links from Gatwick International Airport and the centre of London, and is easily accessible for overseas visitors, especially those from mainland Europe. And if you want to extend your stay, then Britain's annual National Science Fiction Convention, Odyssey 2010, is being organised near to Heathrow airport the following weekend. Come for World Horror and stay for Eastercon!
The World Horror Convention's prestigious Grand Master Award will also bepresented at a sit-down Banquet during the weekend. Past recipients have included Stephen King, Dean R. Koontz, Anne Rice, Ray Bradbury, Clive Barker, Peter Straub, Brian Lumley and Ramsey Campbell. All information about the convention, hotel and location is available onour website including an easy to use PayPal Registration Form (which will automatically convert your payment at the current exchange rate). Or you can print off the form and send it with a cheque (sterling only) to: -
World Horror Convention, PO Box 64317, London NW6 9LL, England. With numerous writers, artists, editors, publishers and booksellers expected to attend from all over the world, this is the one event that the dedicated horror fan, professional, collector or dealer cannot afford to miss!
Wish you were here? . . . Well, now you can be.WORLD HORROR CONVENTION. MARCH 25-28, 2010. BRIGHTON, ENGLAND - full details here http://www.whc2010.org/
Posted by Ali Karim at 19:12