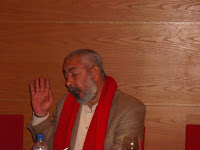 long with his translator Peter Bush.
Padura is best known for his quartet of detective novels featuring lieutenant Mario Conde. The books are:- Havana Red (Mascaras), which won the Café de Gijón Prize, and the Novela Negra Prize, Havana Black (Paisaje de otoño), (Havana Blue) (Pasado perfecto) and Havana Gold (Vientos de cuaresma) and all have been published by Bitter Lemon Press between 2005 and 2008. The quartet have won the Premio Hammett the Asociación Internacional de Escritores Policiacos (International Association of Crime Writers). Mario Conde also features in Adios Hemingway
Leonardo Padura's prize-winning series of novels about Cuban detective Inspector Mario Conde has changed the face of Latin American crime writing. At the launch through his interpreter Padura spoke animatedly about Havana Fever and his reason for going back to his series character Mario Conde. In Havana Fever Mario Conde has retired from the police force and makes a living trading in antique books. Havana is now flooded with dollars, populated by pimps, prostitutes, drug dealers and other hunters of the night. In the library of a rich Cuban who fled after the fall of Batista, Conde discovers an article about Violeta del Rio, a beautiful bolero singer of the 1950s who disappeared mysteriously and it is through her Padura tells the story of Batista, the revolution, the mob-owned nightclubs, and the liveliness as well as the misery of the Cuban 1950s. A murder soon follows. It also covers the crisis of the early 90s and the way in which people looked at alternative ways of surviving. This resulted in families who had libraries selling the contents so that they could live. Havana Fever is a suspenseful crime novel, a cruel family saga and an ode to the literature and music of Padura’s beloved, ravaged island. The novel also covers the period of the bloody dictatorship of Batista. In fact Havana Fever tells the colonial history of Cuba. As seen in the earlier Conde novels, the now-former detective and his expanded circle of friends are a collective device through which the history of post-revolutionary, post-Soviet, and contemporary Cuban history are told.


Padura further explained that in the novel he is trying to portray not only the music of the time (the 1950s) but also the reality of what life was at the time and how Cubans coped with what was taking place. Padura stressed that he felt that his work gave a very realistic view of what was happening in Cuban society but some felt that his books are not politically correct as they show a view of Cuba that the Government were not happy about being shown to the outside world. He stated that he felt that writers had a responsibility to leave an accurate record of Cuban society otherwise later when books were being read there would be confusion as to what actually was truth as compared to what was being put out by Granma. (which is the paper of the Communist Party of Cuba and the Government). Padura indicated that he was not the only writer writing in this critical way and that there were other dramatists, playwrights, artists that were also doing so. For example Fernando Pérez ‘s 2003 film Suite Habana. This is a film without words but follows the daily lives of a number of Cuban families and how they cope with the restrictions placed on them.

It was standing room only at the launch and after talking about his book Padura also took questions from the audience. One of the questions he was asked was that bearing in mind the fact that his books are so well received all over the world how well were they received in Cuba He stated that Cubans were in fact big readers and that his readership had expanded with each book. He further explained that he had received a large number of reviews all over the world for Havana Fever but had only received one review in Cuba despite the fact that it had won the National Literary Criticism Award for best novel. He made it clear fact that it was not that his books were not being read but that the critics were unwilling to take a stance. One of the other questions he was asked was about the state of detective fiction in Cuba. Padura

revealed that he had contributed to the short story collection Cuban Noir which had 18 stories from Latin American and Spanish authors. There were various investigators and protagonists in the stories, but only one story contained a police officer. Leonardo Padura explained that in Latin America there were many reasons for this. He said for example that if you went down to Mexico the advice you would be given would be to avoid the police. The reason for this would be because they are corrupt and criminal as opposed to the police in Europe. Therefore many writers did not want to use the police as protagonists. However, when he (i.e. Padura) started writing the only way he could make his protagonist realistic was by making him a police officer, as there were no P.I’s in Mexico. Though he went on to explain that after the first novel had been written the character had in its own way told him that he did not want to be a police officer and that he did not like the police. He made him remain a police officer for 4 books before relenting in Havana Black. He went on to say that Havana Fever gives Mario Conde’s views on being a police officer. Conde was a good police officer and kept society on an even keel. He said that in Cuba they did not solely see detective fiction as entertainment but also as discussing social implications. At the end of the launch Padura signed books and chatted to everyone whilst drinks were served as well.

Having been a police officer; living in NYC for 15 years, and in Miami, Florida for the past 30 years, and having four Cuban-American Godsons/daughters; I am anxious to read this book. One of my Godsons, I put through Miami-Dade Junior College, the University of Miami, and Indiana University School of Law. He is now a quasi judge with the U.S. Department of Immigration. I am certain his parents will like this book as well.

Michael Phelps,
The writer - (not THE MICHAEL PHELPS, you know, the young, good-looking kid with all that GOLD).
Author: DAVID JANSSEN-MY FUGITIVE, (a Briography, Co-Authored with ELLIE JANSSEN)
THE EXECUTION OF JUSTICE, Published by Blue Line Publishing House, Feb 2009)
JUSTICE DELAYED, (Coming in July, 2009, Published by Blue Line Publishing House)