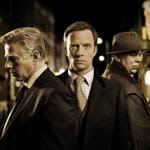 Whilst most of England suffered the Artic-like snow and wind blowing in from Russia, many tuned into ITV1's new three-part thriller WHITECHAPEL. It made a cracking start last night at 9pm with a massive 8.1m viewers (29.8% share), in the face of strong competition from BBC1.
The hour-long drama, featuring an all-star cast inlcuding Phil Daniels, Steve Pemberton and Rupert Penry-Jones, began with 8.4m (30.4%) but slowly declined to 7.7m (28.9%) in the final quarter of an hour. Which I find very curious indeed. In my mind, if the show is coming up to that segments denouement, obviously you'd want to know how it was going to end, wouldn't you? It's like putting down a book you've spent hours reading, only not to read the last few chapters.The show was up by an impressive 72% compared with the channel's slot average for last year of 4.7m (19.9%).
Executive producer Sally Woodward Gentle on giving a modern spin to a Victorian killer.
Where did the idea come from?
The writers, Ben Court and Caroline Ip, wondered whether – if Jack the Ripper came along now – a modern police force with all the technology available would be able to catch him. We wanted to work in the personal journey that DI Chandler goes on as the new boss trying to fit in.
How did you pitch it?It felt like the kind of thing that ITV should be thinking about. It is real ITV material – intelligent with high production values and a fantastic cast, and its core audience is very big on murder shows. This has a 21st-century feel, it definitely doesn't feel old-fashioned, even though you've got all those different layers of history.
How did it evolve from there?
I wanted someone who was going to be sympathetic to our ideas for a modern thriller, and director SJ Clarkson's thoughts chimed with our own. We walked around Whitechapel and she came up with a fantastic mood board with green and browns rather the normal blues, oranges and reds. We also focused on the two very different directions Chandler is pulled in – on the one side, there is Ed Buchan, the Ripperologist with the supernatural side asking Chandler to trust his gut, and then there is DS Ray Miles, who is saying: "Look at the evidence, pound the beat and do what you've got to do."
What were the challenges while filming?
Because so much was shot at night, we had to work with the -curfews of the different London corporations and boroughs. In some you are allowed to film until 11pm, and in others only until 10pm. We had to do several all-nighters and the challenge was getting all of those night shoots into a tight schedule. Working together was an -absolute joy – bloody cold though. One night, a weather warning went out across London that there was going to be a massive storm. Another time we had to film in the early morning and the city was covered in snow.
- Broadcastnews
Posted by Mike Stotter at 15:00