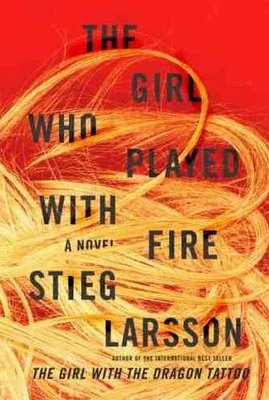 In today’s Washington Post is a lengthy feature on the Stieg Larsson Phenomena which now has infected the US. Thanks to Knopf Publishing –

"He takes you to a darker side of Sweden," says Paul Bogaards, director of publicity at Knopf. "A lot of Americans, when they think of Sweden they think of Saab and Volvo and Absolut. There are much darker undertones to Swedish society that Larsson hints at in all his novels."

Bogaards says the "The Girl With the Dragon Tattoo" has sold 200,000 paperback copies in the United States and orders are already coming in for the sequel, set for release in July. The third installment is currently being translated into English. A movie based on Larsson's books, featuring a tattooed computer hacker and a disgraced journalist, will hit screens in Sweden later this year.
Larsson never got to experience the success.

"He would have been overwhelmed, just like us, and proud and happy," says Eva Gedin, head of publishing at Swedish publisher Norstedts.

Gedin, who worked closely with Larsson, recalls how the author delivered the manuscripts of the first two books in a plastic bag as he was about to finish the third. Norstedts signed a three-book contract right away ¿ an unusual deal for a debuting fiction writer.

"He had a great deal of positive responses from us at the publishing house and ... by key people in the book store industry who said that this was brilliant," Gedin says. Larsson is the latest of many Swedish crime writers to win international acclaim, from the team of Maj Sjowall and Per Wahloo in the 1960s to the more recent Henning Mankell, creator of the gloomy detective Kurt Wallander in such books as "Faceless Killers," "Sidetracked," "Firewall" and "Before the Frost."
The Scandinavian crime writing tradition also includes Denmark's Peter Hoeg, whose "Smilla's Sense of Snow" became an international best seller in the 1990s and a movie starring Julia Ormond, Vanessa Redgrave and Gabriel Byrne.
Set in a scenic Nordic landscape of serene lakes and lonely red cabins, Larsson's trilogy follows computer hacker Lisbeth Salander and journalist Mikael Blomqvist as they get entangled in a series of murder mysteries. Like Mankell, Larsson weaves in social commentary, with democracy and women's rights as prominent themes.

That, the exotic setting and an introspective streak are what set apart Swedish crime writing in a genre dominated by U.S. and British novelists, says Maxine Clarke, a critic at the Britain-based Web site Euro Crime, which specializes in European crime literature.

In Swedish crime novels, Clarke says, "one gets to know the characters' domestic lives and concerns as background to the plots ¿ one feels they are real people rather than, in some other thriller genres, characters who only seem to exist to take part in the novel's main story."

Swedish crime literature has become a phenomenon in Europe, so much so that the Germans have invented a new word for it: "Schwedenkrimi." And the southern town of Ystad offers popular "Wallander" tours, showing visitors the neighborhoods where Mankell's sullen detective solves one grisly crime after another.

As for Larsson, he primarily drew inspiration from British and American authors such as Sara Paretsky, Val McDermid and Elizabeth George. Salander's character, however, was inspired by the strong-willed redhead Pippi Longstocking in the children's books by the late Astrid Lindgren.