Deadly Focus by RC Bridgestock, is the new novel from husband and wife writing team Bob and Carol Bridgestock. Writing under the name R C Bridgestock the couple have almost 50 years experience working at the front line of policing.

Bob Bridgestock brings 30 years of service in the West Yorkshire police force where he rose to the position of Detective Superintendent. Having worked on and helped solve many high profile murder cases, Bob brings a level of authenticity to Deadly Focus often lacking in police procedural novels. Carol worked for 17 years in the police force being a member of the Civilian Support Staff, seeing life in the force in a supporting role and experiencing the life of a partner who husband was dealing with scores of high profile cases. 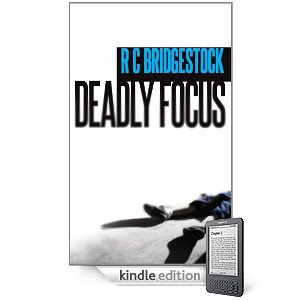 Deadly Focus is the first in a series of novels to be published by Caffeine Nights featuring D.I. Jack Dylan and is set in the fictional town of Harrowfield, Yorkshire. “Even though I worked on a large number of violent crime and murder cases I never wanted to write a non-fiction book, but I draw on those experiences and my extensive knowledge of how real life investigations proceed.” Bob Bridgestock said.

“I write the plot and the story line, taking the reader with me from the moment the Detective gets the call to a body. So from first-hand experience readers can travel to the dark corners, feel frightened and threatened, as well as laughing.” says Bob. “Jack Dylan is an ordinary man doing a tough job which leads him to deal with some of the darkest things faced by humanity.”

Carol works on the draft, building up the story line and characters whilst also bringing out the underlying emotion of the tough side of being a detective. She also adds a perspective which is often over-looked in drama and fiction and that is of the supportive partner. “Often the lead detective is portrayed as being a loner or returning home to nothing more than a whiskey bottle. There are thousands of partners out there who support their husbands and wives, who every day put themselves in harm’s way to keep this country safer. Dylan comes home to a supportive partner in the shape of Jen, and she becomes the rock to keep him anchored.”

Deadly Focus opens with a young girl being snatched from the streets of Harrowfield as she returns from her grandmother’s house a few doors down the road. As realisation dawns on the parents of the child, a body is found and a second child goes missing. D. I Jack Dylan knows that the cases may be connected and realises that a child serial killer may be stalking the streets of Harrowfield. As the case progresses an unexpected twist takes the case close to home and Dylan’s home life begins to suffer.

Deadly Focus is published in paperback and all eBook formats on 31st May 2011.

About Caffeine Nights
Deadly Focus is published by Caffeine Nights Publishing in both paperback and eBook versions. Caffeine Nights has adopted an environmental stand against the unsustainable felling and use of trees in publishing. Caffeine Nights CEO, Darren Laws said. “Publishing is a dirty business but there are ways to make it more sustainable and adopt practices to make publishing greener and more efficient. The paper stock our printers use is guaranteed Sustainable Forestry Initiative® (SFI®) certified and Forest Stewardship Council™ - (FSC®) certified. We work on a basis of print on demand only supplying books to order to save over-supply to bookstores and almost eliminate returns, saving the pulping and landfill of returned stock.”