In July 2011, Top Notch Thrillers is proud to reissue two great British thrillers from the early 1980’s, both of which are fine examples of ‘flight and pursuit’ novels in the John Buchan tradition. 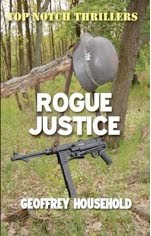 Geoffrey Household (1900-88), often seen as the natural successor to John Buchan, is rightly famous for his 1939 classic Rogue Male about an aristocratic English big game hunter’s failed attempt to assassinate Hitler and his subsequent fight for survival as the hunter becomes the hunted.

More than 40 years after that ground-breaking thriller, Geoffrey Household gave us the sequel, Rogue Justice, where the background to the previously anonymous ‘Rogue Male’ is revealed as he declares his own private war on Nazi Germany, blazing a blood-stained trail from Poland to Greece to dispense his own type of justice on the brutal ideology which has destroyed the Europe – and the woman – that he loved.

Not only is Rogue Justice a sustained, fast-moving action thriller, told with all Household’s usual skill when it comes to a pursuit over wild terrain and his self-depreciating humour, it is at heart a dark, nobly romantic but fatalistic love story. For the rogue hero this time, it is not a question of whether he will survive, but how he will choose to meet his death....

*
Jessica Mann is well-known as a broadcaster, journalist and crime-writer and is currently the crime fiction critic for the Literary Review. 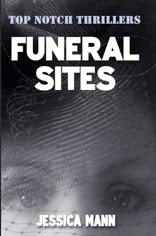 Her 1981 novel Funeral Sites is nothing less than an updated, feminist take on John Buchan’s famous tale of flight and pursuit, The 39 Steps, as the main character finds herself on the run from her politically ambitious (and murderous) brother-in-law. In a frenzied escape from a Swiss alp via London’s club land to a Cambridge hospital, she finds a lone ally in feisty archaeologist Tamara Hoyland, who was to become Jessica Mann’s series heroine, and the chase comes full circle in a dramatic showdown back in the Swiss mountains.

Funeral Sites is a frantic, breathlessly-paced chase thriller which puts a female stamp on what had seemed until then a very male preserve and whilst staying true to the form, the novel cheekily references the work of John Buchan – and indeed Geoffrey Household, another master of the genre.

(*also available as an eBook)

Top Notch Thrillers is a specialist imprint of Ostara Publishing which was established in 2009 to revive Great British thrillers “which do not deserve to be forgotten” using the latest print-on-demand technology and offering many titles as eBooks for the first time. The series editor is Mike Ripley, who currently writes the ‘Getting Away With Murder’ column on www.shotsmag.co.uk.

By September 2011, there will be 20 Top Notch Thrillers available in print and (in many cases) electronic formats. They can be purchased through good bookshops or Amazon and via the Ostara website (www.ostarapublishing.co.uk) which contains much additional information of TNT books and authors.
Posted by Ayo Onatade at 16:56