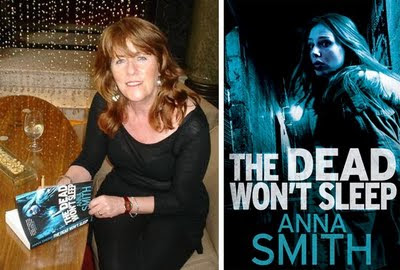 At Shots Ezine we’re always looking out for interesting debut novels, and though not a debut novel as such, ‘The Dead Won’t Sleep’ is Anna Smith’s debut crime novel and one to look out for if you enjoy tough urban noir. Following the journalistic traditions of fellow Scottish crime-writers Val McDermid and Tony Black, Anna Smith has been a journalist for over twenty years and is a former chief reporter for the Daily Record in Glasgow. She has covered wars across the world as well as major investigations and news stories from Dunblane to Kosovo to 9/11. She writes a regular newspaper column in the News of The World with a readership of more than a million in Scotland alone. The Dead Won't Sleep is the first thriller in a series featuring crime journalist Rosie Gilmour.

The body of a young teenage hooker is found washed up on the beach near Glasgow. This stark event barely captures a headline in the cynical world of tabloid newspapers. This is Glasgow in the 1990s and she’s just another dead heroin addict. But Tracey Eadie was only fourteen years old and came from a children’s home in Glasgow. How did she get from there to where she is now? One of Tracey’s friends on the street contacts Rosie Gilmour, a tabloid journalist. She gives Rosie a tip off that’s dynamite, too hot to print but impossible to ignore. Rosie has covered many dark stories in her career. Her background has plenty in common with Tracey’s and her own life could have gone either way. Her investigation exposes a sordid tale of corruption and child abuse that leads from the murky streets of Glasgow to the very top of the establishment. For Rosie, it is the only story worth telling, but she soon discovers that the forces united against her will stop at nothing to make sure nobody ever gets to the truth.
The Shots team met up with Anna Smith in Holborn’s Chancery Court Hotel last night together with award-winning writer / critics Laura Wilson and Natasha N J Cooper thanks to the Quercus Publishing team, who have published the worldwide bestsellers of Stieg Larsson and John Ajvide Lindqvist.
Over cocktails we discovered that Anna has seen the reality of the dark side of human nature, witnessing as a journalist the very worst mankind can offer, and she said while covering the Rwanda genocide, she still can smell of death and decay and it rests uneasily in her memory, so perhaps the title ‘The Dead Won’t Sleep’ is an apt title. She has recently been reading up on the crime-fiction genre listing her favourite writers being James Crumley, Harlan Coben and was very enthused by Noah Boyd’s debut ‘The Bricklayer’. Her inspiration to introduce Rosie Gilmour in her first outing, is due to her first-hand knowledge of the havoc that the Heroin epidemic caused in Glasgow and seeing the effects as a journalist made her focus that period into a dark narrative.
Anna credits strong encouragement from her agent Ali Gunn as well as her editor, the legendary Jane Wood for steering her toward writing a crime-fiction series, and one that would have an appeal beyond the dark streets of Glasgow, and the trail of shared heroin syringes.

Read More about Anna Smith’s ‘The Dead Won’t Sleep’ and other upcoming books from Quercus Publishing here and the launch party here
We know that we’ll be hearing a lot more from Anna Smith’s Rosie Gilmour novels as they probe the dark side of human nature, and provide insight; which is what a journalist does when faced with the shadows in reality.
Photo © 2011 Ali Karim ‘Anna Smith at The Pearl Bar in Holborn’s Chancery Court Hotel’
Posted by Ali Karim at 11:15