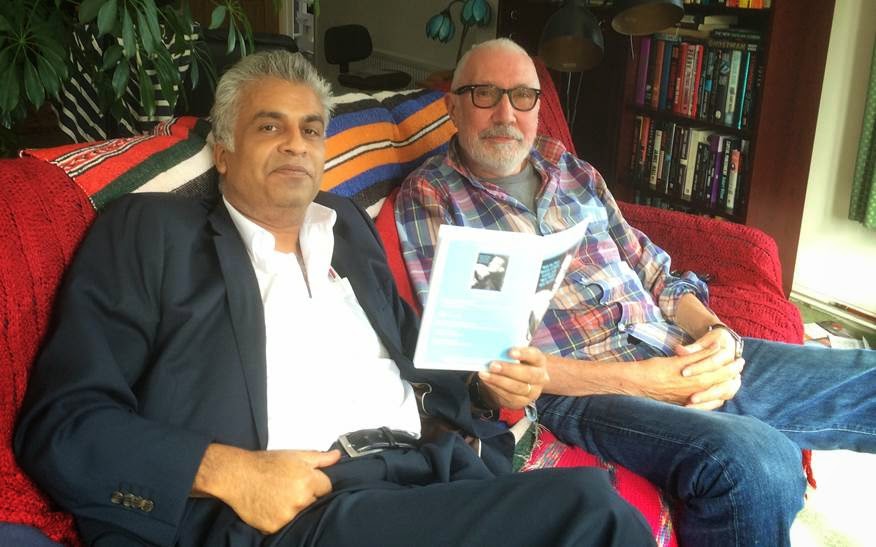 For those ‘in the know’, Mark Timlin, is an accomplished crime novelist setting most of his violent tales of noir on the backstreets of London, especially south of the Thames – with most notoriety and acclaim being reserved for his Nick Sharman mysteries, which were televised starring a young Clive Owen. Timlin also wrote under a series of pen names, including Lee Martin in his notorious Gangster’s Wives. Mark combined his fiction writing with book reviewing, working for many publications such The Independent on Sunday, as well as Barry Forshaw’s Crimetime, and he would appear at many literary events. 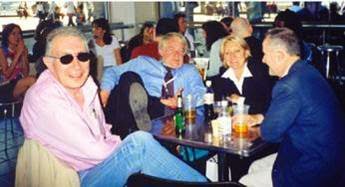 Mark Timlin with fellow writers Mike Ripley, Martina Cole and Russell James at Crimescene 2002 at the NFT on the Southbank of the Thames

While on business outside of London, I went to see Mark and his partner the book publicist and marketer Lucy Ramsey [formerly Publicity Director at Quercus, Lucy has spent her career in book marketing having previously worked for Headline, Hodder, Chatto and Gollancz, among others]. Mark and Lucy had recently moved out of London, and were enjoying their time away from the metropolis. It had been several years since Mark and I had clinked glasses, so I was relieved to see the Hard Man of crime-fiction in such good form, and in rude health. 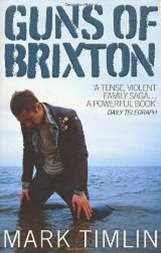 We laughed at the various times our lives crossed, though our chuckling was loudest when we recalled a wonderful lunch hosted by Peter James, with Barry Forshaw. Over wine, Forshaw discovered my passion for the Nick Sharman novels and TV series, so it was of little surprise that he commissioned me to write that section for The Greenwood Encyclopaedia of British Crime Fiction. I have extracted a section of my essay, at the bottom to act as a primer for Timlin’s Sharman novels and TV series.

So over coffee and cake, I discovered that Mark has taken a break from writing fiction, though he still reviews books for Crimetime, and various other printed as well as online publications. We laughed at the efforts Mark and Lucy had to put into refurbishing their new house, and toasted farewell to Mark’s legendary American Limousine that he had to sell during his relocation from London.

I am always amused by the surreal coincidences that life throws at us. While we chatted about what books we’d recently enjoyed, and what films and TV thrillers had come into our line of sight - all three of us had been captivated about the HBO eight episode mini-series True Detective, from the pen of former literature professor and writer Nic Pizzolatto. I mentioned that the series had reinvigorated my interest in weird fiction, of which I had read much [of that sub-genre] in my youth, and that True Detective, introduced me to the work of Thomas Ligotti. I explained that a great deal of Ligotti’s work is now out of print so it had cost me rather more than I budgeted to collect his work. Lucy Ramsey laughed and told me that many years ago when she was at [Victor]  Gollancz she worked on Thomas Ligotti’s UK debut, the collection Songs of a Dead Dreamer, which was a surreal coincidence considering that I’d known Lucy for many years, but unaware that she worked in publicity on the Ligotti debut [my current obsession]. I told her that if she had copies of this book, she should track them down as they are now worth a pretty penny on the collectors market [thanks to the exposure Ligotti’s work had gained thanks to True Detective]. 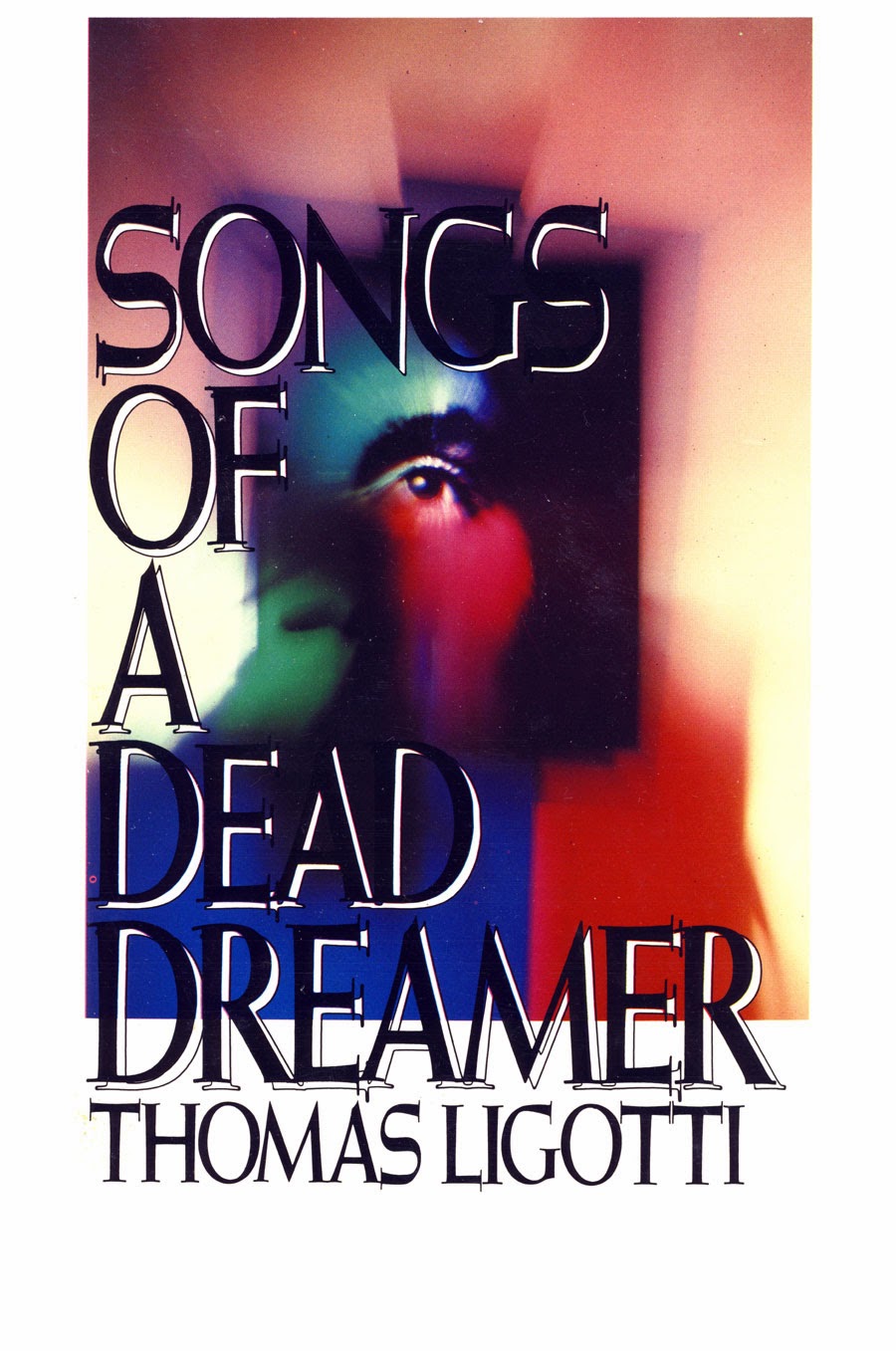 I asked Lucy what she was up to these days, having relocated outside of London? It seems she is still working the Book PR sector, but as a freelance consultant, working with both publishers, as well as authors directly due to the rapidly changing publishing environment. It seems she can provide authors  and the small press a cost-effective solution to expose their work to the market, due to her contacts and connections within the sector. This is especially attractive to the small presses, and overseas authors [particularly from the US] in augmenting the sales activity [of their British Publishers] when the challenging market has little margin for overheads. I thought this might be of interest to new authors establishing themselves; so Lucy Ramsey can be contacted via her email mslucyramsey@gmail.com if you need any sales / PR support.

So as the sun set on the horizon, I bid Mark and Lucy farewell and thanked them for a wonderful afternoon in their new abode, and that I’d be back, as I enjoyed the time talking about books and of course Nick Sharman.

So for those who have yet to discover the Mysterious World of Mark Timlin, here’s an extract from The Greenwood Encyclopaedia of British Crime Fiction edited by Barry Forshaw relating to the Nick Sharman TV series - 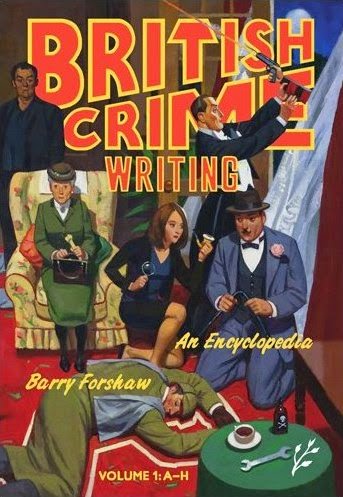 Actor Clive Owen was coming into prominence in the mid 1990’s, following his appearance in the TV series Chancer; when he was cast as the tough South-London P.I. Nick Sharman [World Productions for Carlton / ITV] based on the acclaimed novels by Mark Timlin. As a character, Nick Sharman has his share of problems, a former police officer whose career was derailed due to drink and drugs which also cost him his marriage; he lives on the edge as a private eye scratching a living in the alleyways of South London. He has daughter Judith to support as well as a string of girlfriends and low-lifes who are forever on his case. The young Clive Owen is perfectly cast as Sharman, as he has the bad-boy good looks and a sneer that breaths life into his portrayal of Sharman, but most importantly, his eyes show the pain and the void in his heart brought about from his hard life, living day-to-day, woman-to-woman.

The first of the Nick Sharman adventures was the feature-length The Turnaround [1995] based on the book of the same name, and adapted by writer Tony Hoare and directed by Suri Krishnamma. The Turnaround actually follows the novels’ plot closely. Sharman is on a hunt to clear his name, following a case in which he’s hired by a James Webb [Bill Paterson] to find the guys who murdered his sister and her family. The case goes seriously off the rails and Sharman is on a race to clear his name as he becomes the principal suspect to the murders. Timlin makes a cameo appearance but blink and you’ll miss him. This episode pilot for the Sharman series attracted 10 Million viewers and was the only episode released on VHS.

It was not until 1996 that we’d see Owen return as Sharman in Take the A-Train [Episode 1] with supporting actress [the eye-catching] Samantha Janus playing a page-3 model. This time around Sharman investigates the [apparent] suicide of a former police colleague who appears to have thrown himself off a tower-block. Sharman’s investigation gets himself involved in a gang-war in the neon world of club-land.

Hearts of Stone [Episode 2] is probably the best of the series, due to writer Paul Abbott following the Novel’s story closely. Sharman is in pursuit of a couple of heavy-handed debt collectors when he gets roped by former colleagues from the police drugs-squad to infiltrate a dope smuggling operation. It is a mssion he can’t refuse as the alternative offered is fifteen years on the wrong side of prison bars. The episode features a manic Keith Allen playing to form. 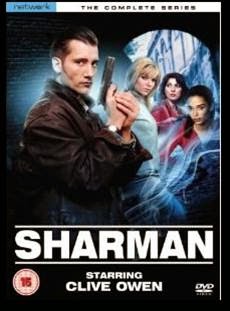 A Good Year for the Rose [Episode 3] is actually based on Nick Sharman’s debut [in novel format], and features a cracking performance from Ray Winstone. Sharman is hired as a minder for a lesbian dancing duo when Winstone playing hard-man George Bright, hires Sharman to track down his missing eighteen year old daughter. The case takes a turn for the worse when Sharman finds Bright’s daughter dead, overdosed in a squalid squat and then Sharman ends up where else? But the local hospital.

Sharman [Episode 4] – The last in the series was an original screenplay, but does feature a scene from Timlin’s novel Pretend were dead and would be the last in this cult series. Apparently due to the uproar about violence on TV, following the aftermath of the Dunblane shootings, Carlton / ITV cancelled Sharman, just as the series was finding its feet. Tragically it has never been repeated on terrestrial or satellite TV, and is long overdue for a DVD release. In this final episode we see Sharman roped into a case of money laundering and dodgy dealings at a local bank. All the while, he’s about to get married.

Although Nick Sharman is British, his roots from Timlin’s novels are pure Raymond Chandler as the cynical eye he deploys comes from the American P.I. tradition. Timlin will forever be remembered for Nick Sharman, as Chandler is always associated with Philip Marlowe, and those with long memories will always associate Clive Owen with Nick Sharman, despite whatever he does under the shadow of Hollywoods’ famous hill. 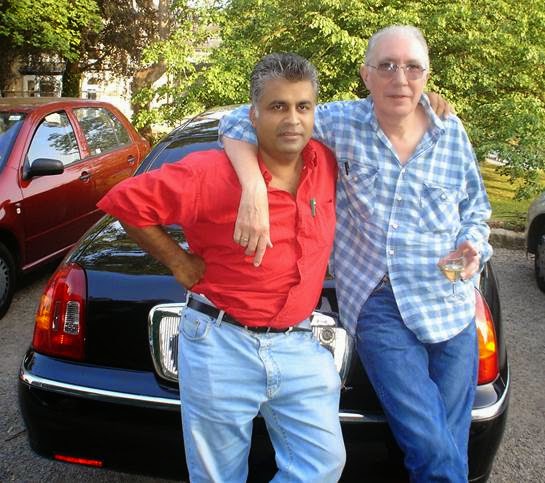