Yorkshire beat the Guinness World Record for the Most People Dressed as Sherlock Holmes today (31 August) with 443 gathering from across the UK dressed as the detective. 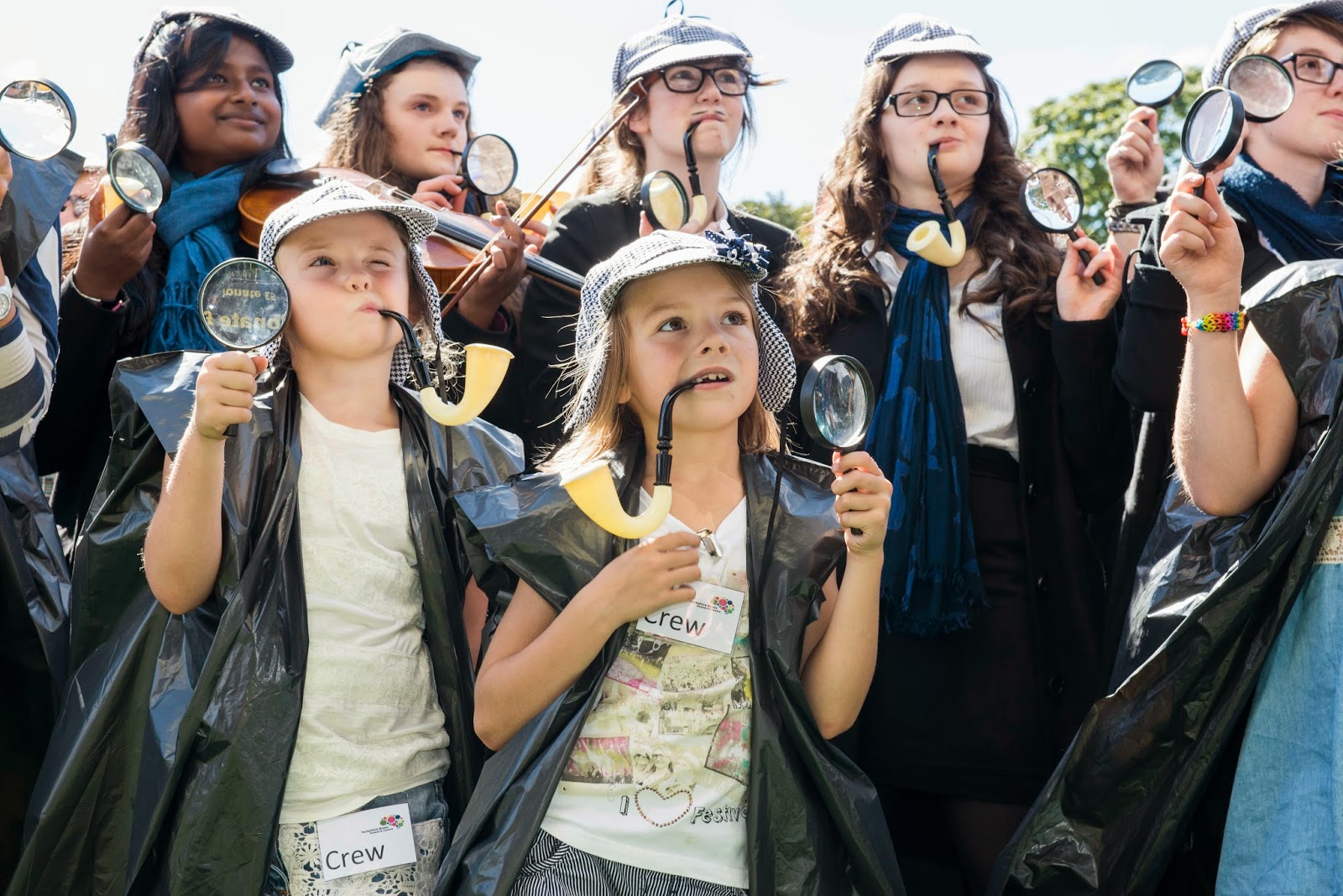 In a dedicated Sherlock Festival, with music, dance, circus, funfairs and cosplay, hundreds of people dressed in deerstalker hats, cloaks, with pipe and magnifying glass, did a collective Sherlock mob dance to ‘Staying Alive’ putting a modern twist on the Victorian detective. The dance included the theme tune to the BBC Sherlock series, shuffling to the left then the right.
On a glorious sunny day at Temple Newsam, there was a sea of dancing Sherlocks, at the end of the Record, they sang along to ‘We are the Champions’.
The last World Record attempt was in London – Yorkshire trebled the number collated in the capital (113).
Sherlock and Dr Who writer STEVEN MOFFAT and wife, TV Producer SUE VERTUE, sent a video message of support for the Sherlock World Record, which was met with cheers and applause. They donated a BBC Sherlock script which was signed by all the cast, including Benedict Cumberbatch, and writers, for the best dressed Sherlock.
The winner was Christian Whitley, 12, from Leeds.
A dropbox message of support from Steve Moffat and Sue Vertue was also received.

SHERLOCK ON THE CASE FOR BRAIN RESEARCH
The attempt took place at 2.30pm.
Sherlock Holmes, one of the most popular consulting detectives of all time, is on the case to help raise money for one of Europe’s largest teaching hospitals - the Leeds Teaching Hospitals – to help raise funds for a new Yorkshire Brain Research Centre.
The Guinness World Records attempt promised to be the biggest Sherlock party ever. Every 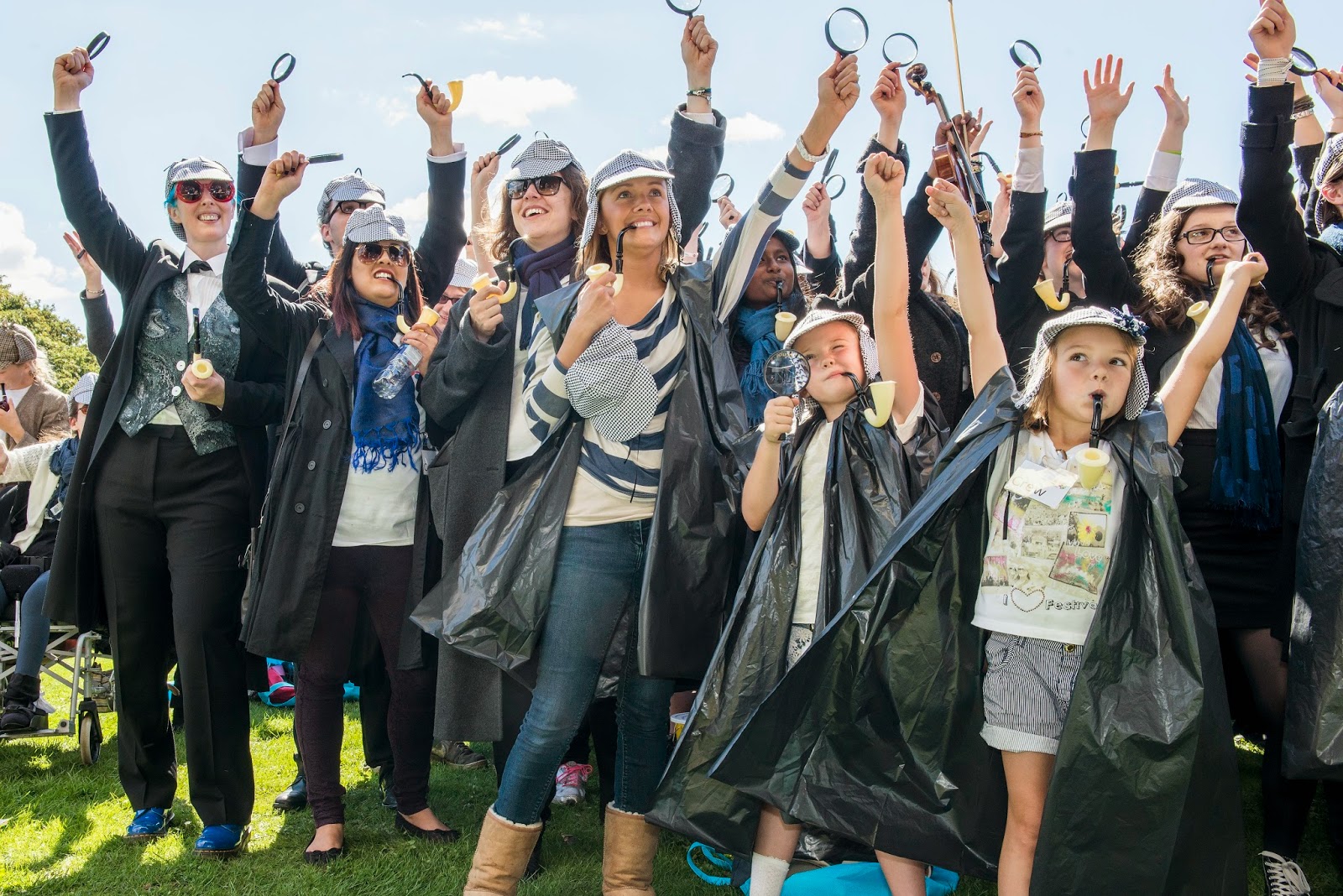 participant received a Deerstalker hat, pipe and magnifying glass on the day of the event for an entry fee of £15, all proceeds go to the charity.   The minimum number of people required to set a new Guinness World Records title is 250 participants.
The event, hosted by actor and comedian Neil Grainger, included a big stage featuring comedy, music, dance, cosplay, circus and theatre, and a fun fair.

Clair Challenor-Chadwick, Appeal Director of the Yorkshire Brain Research Centre, said: “Sherlock is the perfect fit for brain research as the brainiest detective of all time was born in Yorkshire. He is helping us raise awareness of this much under-funded area to help patients with dementia, epilepsy, Parkinson’s and MS.”
A spokesperson from Guinness World Records said: “We’d like to wish everyone participating in this attempt the very best of luck.  It’s for a great cause, and hopefully by the end you’ll be official Guinness World Records holders.”
The event has galvanised world-wide support with donations from Chile, France, USA, Canada, Japan and Mexico. Sherlocks have been popping up from around the world on social media, with Sherlock fans posting #sherlockselfie pics to help raise awareness of brain research and the world record attempt. Pictures have been posted from the Great Wall of China, from Australian beaches, and outside 221B Baker Street itself.
The new research centre will help deal with life-limiting brain conditions, including Parkinson’s disease, epilepsy, multiple sclerosis and dementia. The centre will conduct research for patient benefit and will help scientists find new treatments and drug therapies.
By 2030 there will be a 20% increase in Parkinson’s alone, a disease that we’ve seen take its toll with Robin Williams, while numbers of dementia patients are expected to soar by 80%.
Social media fans are being asked to TEXT BRAIN to 88811 to donate £5 and to nominate a friend.
For more info: www.sherlockworldrecord.com
@sherlockrecord, #sherlockselfie
ENDS
EDITORS NOTES
The Yorkshire Brain Research Centre is part of the Leeds Teaching Hospitals Charitable Foundation, charity number 1075308.
For information about the Yorkshire Brain Research Centre go to www.ybrc.org.uk
The Sherlock World Record will raise funds for a £2m research centre for Epilepsy, MS, Parkinsons and Dementia. Please contact Appeal Director, Clair Chadwick, for more information on 07531948014 or email clair@causeuk.com