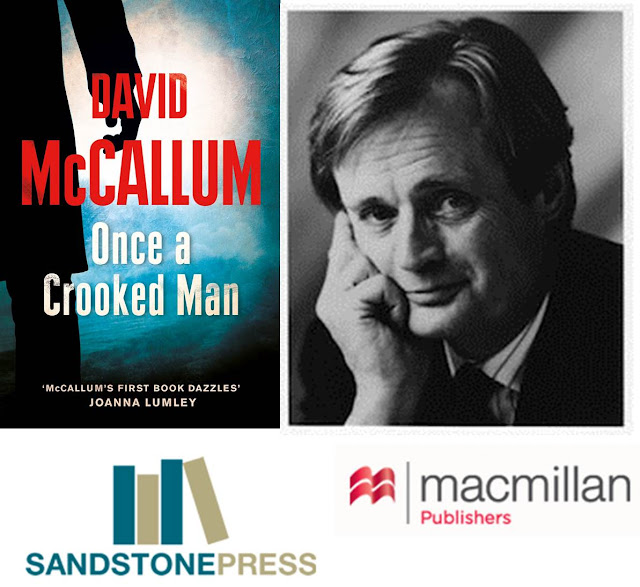 It was quite the coup when we heard last year that Sandstone Press in Britain had gained rights to publish David McCallum’s debut crime novel Once a Crooked Man. I asked the publishers to please let me have an early read, as I had been a fan of Scotsman David McCallum since his early days acting in The Man from U.N.C.L.E. and then followed his varied career, though younger people perhaps know of him more affectionately as NCIS medical examiner Dr. Donald "Ducky" MallardNCIS
, rather than Illya Nickovitch Kuryakin.

So Sandstone Press were as good as their word, and I tore through this good natured international caper narrative in two sittings, for it has the pace of sprint, with a quirky style that made me smile when I put the book down.

I wrote at the time –

The narrative is striated with a dry wit that helps the reader overlook some of the more surreal events that follow Murphy’s miss-adventures. Reminiscent of Buchan’s The Thirty-nine Steps, or Hitchcock’s North-By-Northwest or one of Westlake’s Dortmunder novels, the pace is relentless, but with a knowing style, and one that is as engaging as it is furious. Naturally there is romance against this gonzo-chase backdrop, and soon Murphy finds the direction he was looking for, as all heads turn as the hunt goes by, including Lizzie Carswell, a special agent, but who is she really working for?

The writing style makes one query why McCallum hadn’t penned a crime novel before, for like The Man from U.N.C.L.E character Ilya Kuryakin, he is as resourceful as a writer, as he is an actor. I feel that it won’t be long before another crime thriller will be forthcoming, highly recommended and very different, where the genre is filled with tales of Noir, we have this light and highly energetic tale, that makes one smile while we turn the pages with impatience, as well as ruminating about the significance of coincidence in our lives. 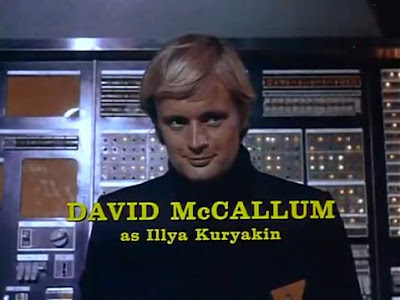 Read the full review from Shots here and it seems we’re not the only critics to have their head turned by this debut.

So despite David’s very busy schedule traversing the Atlantic, he found time to ‘Open Channel D’ and discuss a little on how his new foray into crime writing came about.

Ali : Welcome to Shots Ezine David, so let’s ask the most obvious question first; how did you find yourself writing a crime novel, Once a Crooked Man?

David: I sat down with the intention teaching myself to write over 15 years ago. The ensuing manuscript went in and out of drawers until about four years ago when I took it out and decided that what I had written deserved to be finished.  Once a Crooked Man is the surprising result.

Ali : And so were you a reader in your youth? And what about your reading in the Crime, Mystery and Thriller genre?

David: When I was growing up there was an extensive library in our living room and I read all the books I could lay my hands on. These included many detective novels. And of course the Strand magazine with the Sherlock Holmes stories.

Ali : Was Once a Crooked Man your first approach to creative writing, as it seems such an assured debut?

David : It seems that over the years I subconsciously developed a personal style of writing. This is quite a surprise to me and I only hope that in attempting to write a second book I can rediscover this again.

Ali : When you sat down to write, did you have the plot buttoned-downed, or did you follow a less rigid path, with perhaps just an outline?

David: The entire exercise started with the idea an actor being handed a suitcase with $1 million in it. All of the other characters created and developed themselves over the years and I never had a complete plot in mind. It simply evolved. 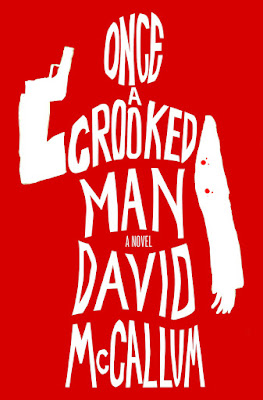 Ali : I couldn’t but help myself picture David McCallum as your main protagonist Harry Murphy, as the old adage ‘write what you know’ often hints at; however the book does contain investigators, criminal families, romance and security issues, so did the novel require much research?

David: Yes. I worked with DEA and with the State’s Attorney in upstate NY. In fact, I did more research than was necessary, but it was very enjoyable.

Ali : Once a Crooked Man, is good natured fun, which is the veneer that covers a dark tale, so how careful were you with humour within a crime novel?

David: I never consciously attempted any humour. It appeared all by itself.

Ali : So what’s next in store for David McCallum? More US TV? NCIS? and is there any credence to the rumors of a Sapphire and Steel feature film, but more crucially, are we likely to see you return to the crime novel?

David: The publishers have asked me to write a second book. There is no credence to a Sapphire and Steel film. I am in negotiations for another year of NCIS. 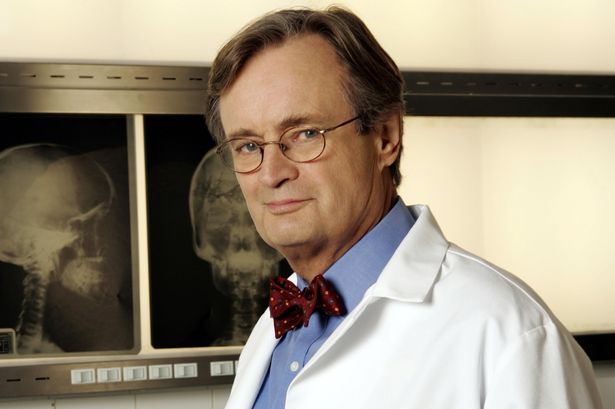 Ali : So any hints for those considering penning a debut crime thriller?

David: The moral of the story is if you want to write a book all you have to do is put your butt on a seat and get on with it. That’s all I did!

Ali : Thank you for your time, and we are eagerly awaiting a new work from David McCallum

David : Pleasure’s all mine, glad you liked Once a Crooked Man

Shots Ezine would like to thank Ruth Killick and Sandstone Press for arranging this interview; and for Shots readers, remember we have discounted copies available from the Shots Bookstore here, and for the curious, you can download the opening chapter from David’s American Publishers, St Martin’s Press here

If you like caper driven narratives, and enjoy a quirky crime / mystery novel; we would recommend Once a Crooked Man, highly, and are looking forward to a follow-up.
Posted by Ali Karim at 05:00