Talking about Quirke with Benjamin Black 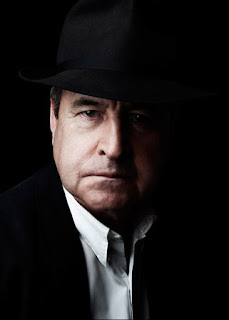 Benjamin Black is the pen name of Irish author John Banville.  He is the author of seven novels in the acclaimed Quirke series. He agreed to be interviewed for Shots.

BB:  Many years ago I was commissioned to write a television mini-series set in 1950s Dublin. I did three one-hour episodes but, as with so many of these projects, they never got made. Then I began to read Georges Simenon, was greatly impressed, and had the idea of turning the screen series into a novel: the result was Christine Falls, the first Quirke book. Why did I make him a pathologist? I don’t really know. But I know I didn’t want to write about a detective.

Your latest Quirke novel is Even The Dead.  How did the storyline come about?

BB:  I start with a very vague notion of a plot and just begin to write. Often I have no idea where I shall end up--with Vengeance, for instance, I was almost at the end before I decided who the killer was. As Raymond Chandler said, it doesn't matter a damn what a book is about, all that counts is how it is written. He also said he didn't care who killed Professor Plumb with a lead pipe in the library, and I agree with that, too.

There is very much an elegiac tone to Even The Dead. Loose ends are being tied up. Is this the end of Quirke?

BB:  Not at all. It's true that every time I finish a BB book I think I won't do another one, but the characters are too interesting for me to let them go, and always I'm drawn back to them. In Even the Dead the most significant happening is Quirke's falling in love at last--and with a psychiatrist, at that. I hope he will be happy. We'll see.

How much does religion specifically Catholicism play a part in your writing?

BB:  Well, I was brought up as a Catholic, which meant I was brainwashed from an early age. When I came to realise the pernicious influence that religion wields in human lives I became extremely angry. Some of that anger remains, so of course I transferred it to Quirke.

How important is place, in this case Dublin in your novels?

BB:  Extremely important. I think of Dublin, and specifically 1950s Dublin, as a central character in the Quirke books.

How would you explain Dublin to someone who has never been there?

BB:  I'm not sure that one could 'explain' something so intricate and diverse as a city. What I loved about the Dublin of my youth was its peculiar mixture of gaiety and melancholy; it's this ambiguous aspect of the place that I have tried to capture in the Quirke novels.

What made you decide to set the Quirke novels in the 1950s?

BB:  Since I was setting out to write noir fiction, 1950s Dublin seemed the ideal milieu: all

that repression, all that guilt, all those dark secrets deeply buried: perfect material. The Dublin of those days reeked of alcohol and cigarette smoke and sadness.

BB:  I read Chandler as a teenager and was greatly impressed to discover that crime fiction could be stylish. Before Chandler I had read mainly Agatha Christie, whose lumpen prose made me feel I was chewing on sawdust. Chandler by comparison was the epitome of elegance, wit and sophistication. Much later I discovered Simenon, a true genius. And of course the great Richard Stark, whose Parker novels are superb.

Which five noir novels would you say are your favourites and why?

BB:  The Long Goodbye, Raymond Chandler. Not his best, perhaps, but certainly the darkest and most compelling.

Dirty Snow, Georges Simenon. This was the first Simenon I read, and I was utterly bowled over by it.

The Hunter, Richard Stark. The first of the Parker novels, and still one of the best. John Boorman made a wonderful movie from it, Point Blank.

You have been writing fiction now for quite sometime both as Benjamin Black and also with your real name John Banville.  How much has your writing changed and do you have a different way of writing the Quirke series as opposed to when you are writing as John Banville?

BB:  Yes, they are two entirely different writers. Even their working methods are radically unalike--Banville writes with a fountain pen, Black types direct on to the screen. I always say that what you get from Banville is the result of deep concentration, while from Black you get pure spontaneity.

What do you think of the state of Irish crime writing at the moment? Including yourself there are a quite a number of excellent Irish writers that are writing really good books.

Crime fiction especially contemporary crime fiction is said to be very good at social history. Is there anything you won’t write about?

What one question would Benjamin Black like to ask John Banville and vice versa?

BB:  Do you like being Benjamin Black? Why?  I tolerate him. He keeps me busy.

There was a BBC series made of Quirke featuring Gabriel Byrne.  Are we likely to see anymore?

BB:  Well, I certainly hope so, but at present there is nothing in production.

What are you working on at the moment 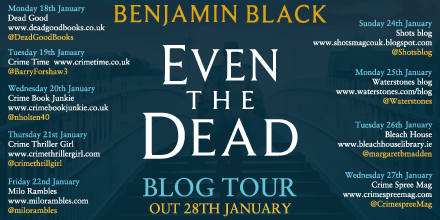 Even the Dead by Benjamin Black

A suspicious death, a pregnant woman suddenly gone missing: Quirke's latest case leads him inexorably toward the dark machinations of an old foe.

Perhaps Quirke has been down among the dead too long. Lately the Irish pathologist has suffered hallucinations and blackouts, and he fears the cause is a brain tumor. A specialist diagnoses an old head injury caused by a savage beating; all that's needed, the doctor declares, is an extended rest. But Quirke, ever intent on finding his place among the living, is not about to retire.

One night during a June heat wave, a car crashes into a tree in central Dublin and bursts into flames. The police assume the driver's death was either an accident or a suicide, but Quirke's examination of the body leads him to believe otherwise. Then his daughter Phoebe gets a mysterious visit from an acquaintance: the woman, who admits to being pregnant, says she fears for her life, though she won't say why. When the woman later disappears, Phoebe asks her father for help, and Quirke in turn seeks the assistance of his old friend Inspector Hackett. Before long the two men find themselves untangling a twisted string of events that takes them deep into a shadowy world where one of the city's most powerful men uses the cover of politics and religion to make obscene profits.

More information about Benjamin Black and his work can be found on his website.