The Return of DS Aector McAvoy 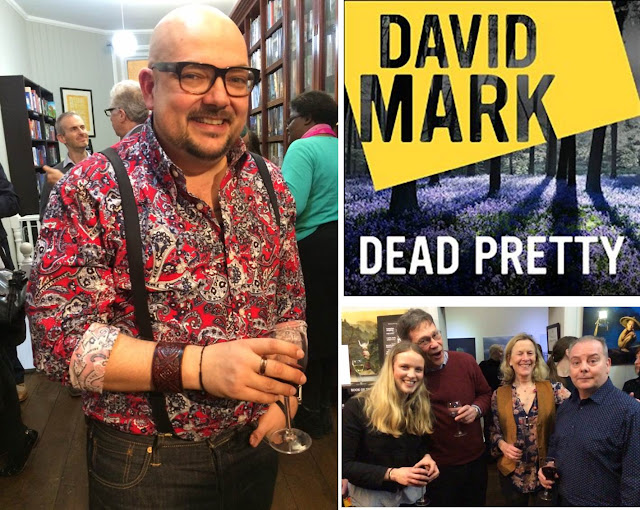 It’s been a busy week for the London based book reviewers, journalists and critics that trawl the darkest edges of literature, namely crime mystery and thriller fiction; as publishers are preparing their 2016 work for market. Last week we attended the Hodder & Stoughton, Headline and Quercus Publishing Party, held alongside the Embankment of London’s Thames. All three publishers form a significant segment of the Hachette Publishing group, and fitting within the Hodder & Stoughton imprint is the UK division of Mulholland Books, which showcases some of the more unusual offerings, such as David Morrell’s award-winning historical series featuring Thomas De Quincey and the DS McAvoy series from Hull based journalist David Mark, to name just two of their authors.

Just out from Mulholland is Mark’s fifth novel DEAD PRETTY, and what a dark ride it is indeed, as our reviewer discovered. So it was a delight to attend the launch party that Hodder and Stoughton had organised in-conjunction with London’s Goldsboro Books, in Covent Garden. The Hodder Team were out in force with Nick Sayers, Kerry Hood and David’s editor Ruth Tross. 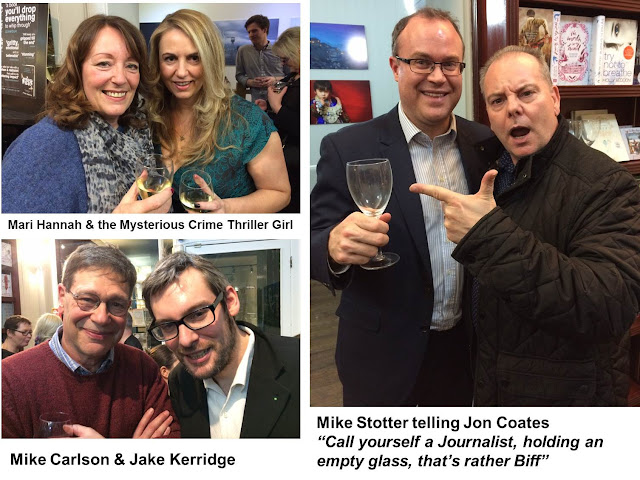 The wine flowed like water, as did the conversation. It was great to bump into colleagues in the reviewing world such as Mike Carlson, Jon Coates, Jake Kerridge, as well as Bloggers such as Milo Rambles, and “Steph” aka the mysterious crime thriller girl. It was also great fun to bump into various writers who had come to support David, such as Mari Hannah, who writes the Kate Daniels series. It was a few years ago at a Crimefest Convention in Bristol where Mari and I found ourselves seated together for the Gala Dinner with her publishers Pan Macmillan. I took the opportunity to congratulate her on publishing her first standalone The Silent Room, and the acclaim it had gathered was extraordinary. Barry Forshaw commented in The Independent –

There are two kinds of crime writer. There are the high-profile, starry figures, routinely called upon to be pundits for the genre – and whose prestige allows them to get away (almost scot-free) with the odd misfiring book. And then there are the others: the quiet, hard-working professionals who simply get on with the job, delivering reliable, readable fiction that may not have any truck with innovation or experiment, but delivers the kind of reader-pleasing product (misfires discouraged) that ensures their contracts are renewed regularly. Mari Hannah is in the latter group, and over a solid series of books has built up a faithful following.

With her pithily drawn Northumbrian settings, Hannah has produced a compellingly readable series featuring gay copper DCI Kate Daniels, which has maintained a satisfyingly dark and tense atmosphere, the pungent characterisation matched by persuasive detail of forensic and policing methods. 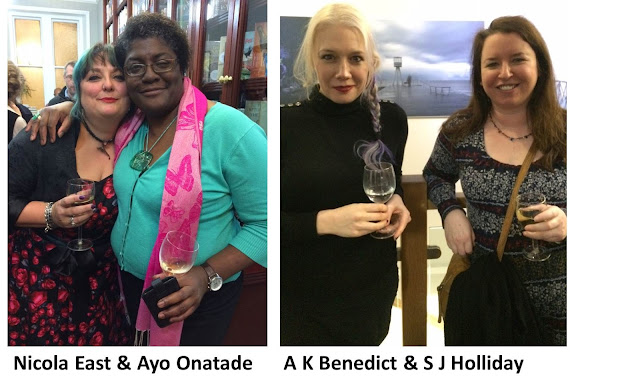 I was also delighted to have a chat with writers Susi S J Hollliday and Alexandra A K Benedict. Susi and I had been in communication prior to Bouchercon Raleigh on the panel planning, and the curious thing was during the event in North Carolina, due to my frantic programming tasks, I actually hadn’t seen her at the event, but then again attendance was over 1,400 people, and I was never in one place for more than a minute or two, as I wondered around checking panels, sorting last minute problems, and basically ensuring the event ran as smoothly as our team could manage. 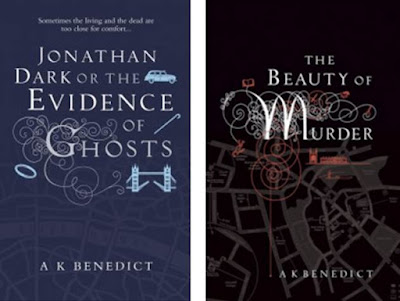 I was looking forward to Alexandra Benedict’s follow-up to her debut novel The Beauty of Murder – which was titled Jonathan Dark or The Evidence of Ghosts due for release in February from Orion Publishing, as her work is in a favourite subgenre / hybrid of mine, one that merges crime and mystery with horror and the weird.

Anyway, with much mingling, and Kerry Hood ensuring our glasses of wine were kept topped up; Ruth Tross, took to the front to introduce David Mark and his new work, DEAD PRETTY followed by David himself giving his usual self-deprecating welcome to all the guests who came to celebrate his latest DS McAvoy thriller. His speech was very amusing, in fact I have noticed that the writers that write the toughest narratives tend to be the nicest of people, and David is no exception.

David is gaining traction in the US and I was delighted to hear that he and his wife Nicola are planning attending Bouchercon “Blood on the Bayou” in New Orleans later this year. This will be David and Nicola’s first Bouchercon so they were keen to listen to the experiences of Mike Stotter and I, and we were delighted to hear that Ruth Tross of Hodder / Mulholland was also going to attend, so the British Contingent was taking shape. The event is being chaired by the best-selling author and musician Heather Graham, so click here for a free eBook on why Heather loves New Orleans.

So after the party, we thanked David Headley of Goldsboro Books, and the team from Hodder and Stoughton / Mulholland Books for their hospitality, and headed for some dinner, where Mike and I discussed plans for our trip to New Orleans, as well as priorities on reviewing and upcoming Shots features. We were both very encouraged at the exclusive telephone call with David McCallum which though concise [due to his busy schedule] revealed details on his engaging debut crime novel, “Once a Crooked Man”. 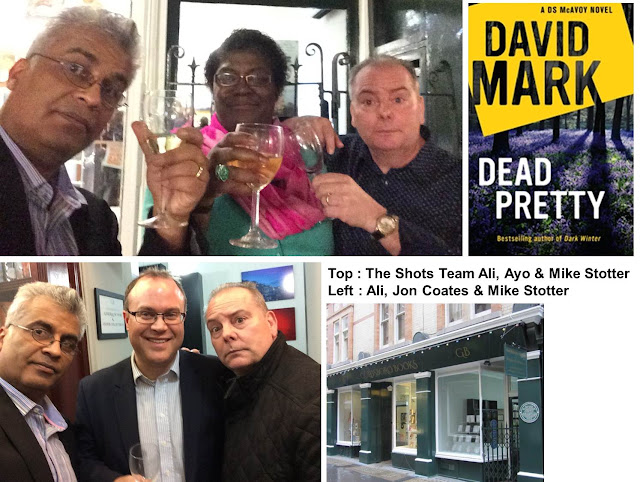 As we left the restaurant, by sheer serendipity, we noticed Ruth Tross, David Mark and Nicola East with some others standing outside a bar and of course David’s booming laughter – so we joined them for a night cap, and toasted the success of Journalist David Mark, turned best-selling crime-writer, a man with a pitch-black imagination, but with a sense of humour and wit that makes his work, dare I say unique. 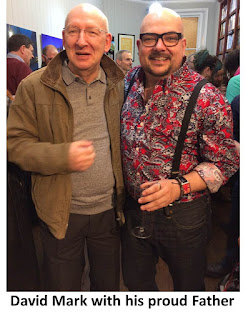 If you haven’t discovered the world of DS McAvoy, then you are in for a treat, but be warned these are very gritty and tough detective novels, but are striated with a knowing eye, and with a social conscience.

This link explains more, because Detective McAvoy takes his readers to Hull and Back……
Posted by Ali Karim at 00:45