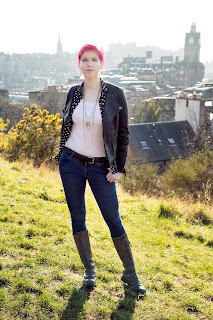 I like to smoosh together varied elements that interest me into books. It keeps things fresh for me and hopefully keeps things interesting for readers. My earlier books, Pantomime and Shadowplay, feature subjects like the circus, stage magicians, gender and sexuality, and the line between magic and technology. My next book, False Hearts, ended up shifting away pretty drastically from young adult fantasy to near future thriller, and had different influences: future tech, neuroscience, conjoined twins, cults, the mob, and more.

The book idea was sparked by reading an article on io9 about Violet and Daisy Hilton, conjoined twins famous in the vaudeville era. They did a film in the 50s called Chained for Life, where one twin is accused of killing her sister’s boyfriend and the other is implicated as well, by virtue of being attached to her sister. A clip was embedded in the article. I started thinking about how close twins’ bonds can, how some develop their own language and understand each other in a way no one else can. How much closer that bond might be as a conjoined twin, by virtue of you never having any privacy. I started researching more about various conjoined twins. I kept thinking: how would you feel when someone you think you know better than yourself has a secret from you, and it’s something like murder? How far would you go to find out the truth? Taema and Tila were a result.

False Hearts is set in San Francisco about a hundred years from now. The United States has fractured as a result of tension from climate change, and so the west coast is now Pacifica. At first glance, this near future has a lot to offer. Poverty is pretty much eradicated, there have been no major wars in years. Everything is recycled and San Francisco is an ecotopia. Thanks to gene therapy and walk-in flesh parlours, everyone looks perpetually young and beautiful. Crime is stopped through the widespread use of the drug, Zeal, and any criminals found are frozen in stasis. A few remain in the underground mob, the Ratel, which Pacifica is doing all in its power to eradicate. Things in this future are darker beneath the surface, and the future is no utopia.

My twins, however, have not been raised in this world, but a cult just on the outskirts that also pretends to be more perfect than it is. Part of the book follows this period of their lives. Taema and Tila have not been around any technology invented past 1969, and to change themselves in anyway is considered sacrosanct. Even if that means letting both twins die from a failing heart. They know they need to escape, but the leader of the cult won’t let them go so easily.

There are a lot of elements in the book, and they combine in a way I love. There’s futuristic
elements because I love to world build and research as a result of my fantasy background, but the core story is all thriller: the ultimate crime of murder, and a sister who would do anything to find what her twin has done.

To save her twin, she must take her identity. One night Tila stumbles home, terrified and covered in blood. She's then arrested for murder, the first by a civilian in decades. The San Francisco police suspect involvement with Verve, a powerful drug, and offer her twin sister Taema a chilling deal. Taema must assume Tila's identity and gather information to bring down the drug syndicate. The police may then let her sister live. However, Taema's investigation raises ghosts from the twins' past. The sisters were raised by a cult, which banned modern medicine - yet as conjoined twins, they needed life-saving surgery to replace their failing heart. And with help from co-conspirators, they escaped. Taema now discovers that Tila had found links between the cult and the city's criminal underworld. The twins were once unable to keep secrets, but will learn the true cost of lies.