The invention of murder mystery by M J Carter

As part of her blog tour M J Carter is today talking about the invention of murder mystery.

My new book, The Printer’s Coffin, sets out to bring to life the time in the early 1840s when the British tabloid was invented and our seemingly bottomless appetite for a good murder was born: the two events, it just so happens, were inextricably linked. 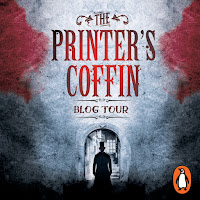 The public fascination with murder had actually begun two decades before. Two notorious events had generated it: the Ratcliff Highway murders of 1811, where within 12 days of each other the inhabitants of two houses in London’s East End had their throats cut in their homes by an unknown assailant; and the Radlett murder of 1823, when gambler John Thurtell lured William Weare—to whom he owed £300 (equivalent to over £20,000 today)—to the country for some gambling, and then slit his throat with a penknife and smashed his head with a gun butt. Both murders attracted enormous media attention, the press of the time running endless coverage stories, and dwelling lovingly on the nastiest details. One paper described how, with corpse in the room, Thurtell sat down to a hearty dinner of pork chops and then joined in a spot of singing.

It was five years later in 1827 that the writer Thomas de Quincey, obsessed with both murders and notorious for his Memoirs of an Opium Eater, wrote his wickedly satirical essay, ‘Murder Considered as one of the Fine Arts.’ He was the first to point out the pleasure that hearing or reading about a good murder gives us: that alluring combination of the disturbing and the seductive, the gory details plus their contemplation from a distance, which produces a thrill of fear and at the same time reinforces a feeling of safety.

De Quincey represented the highbrow end of the growing fascination with murder. At the lower, grubbier, populist —and arguably just as influential—end, were the hack writers of broadsides, one page ‘news’ stories sold for half-a-penny on the London streets.

The doyenne of these was James Catnach, who set up a printworks and stable of writers in

the grim surroundings of Seven Dials (in now ultra-fashionable Covent Garden) in the 1820s. For 20 years Catnach’s writers, known as ‘the bards of Seven Dials’, wrote ‘true stories’ of rapes, blackmails, violent murders, and executions. Catnach never shrank from embroidering the facts or when news was slow, making them up entirely. When a London theatre collapsed, killing 15 people, his list of casualties grew day by day until the death toll was over 100.

‘Then,’ said one of his street sellers, ‘we killed all sorts of people, the Duke of Wellington, and all the dukes and duchesses…’

At the time this was accepted— newspapers which carried real news had to pay a four penny duty: the British government, paranoid about revolution since the Napoleonic wars, had deliberately made them expensive to discourage the working classes from reading. Radical campaigners fought this ‘tax on knowledge’ as it was called—printing unstamped papers, demanding freedom of speech and the vote for all, and often serving long prison sentences for their efforts.  By 1836 they had won the print war, if not the vote: the six best–selling unstamped papers sold in one day what the august Times sold in a week; newspaper duty was reduced to one penny.

But the press campaigners were not the real winners. Instead it was new weekly newspapers, crude and populist, that triumphed. The first was Lloyd’s Weekly, started by Edward Lloyd in 1842, a print entrepreneur who had virtually invented the penny dreadful—cheap booklets of gothic horror stories and ghastly murders— in 1835. He was famous for making his publications as lurid as possible: ‘more blood’ he’d say to his writers, ‘much more blood!’ Between the penny dreadfuls and his weekly newspapers, Lloyd elevated the coverage of a grisly murder to an art form.

He gave his newspaper readers ‘cheap and sensational’ coverage with all the gory details. A small boy murdered by his stepfather calling piteously for his mother as he was killed; a man ‘roasted to death’ in a house fire. An alleged cannibal who admitted as he went to the gallows that he had ‘acquired a taste for human flesh that could not be satiated.’ Some of the stories were true, some were not. Actual news was often no more than 20 per cent of the editorial space and a good half of that was death and crime.

The recipe was a massive hit. Within months Lloyd’s Weekly was outselling every other paper: tens of thousands of copies a week.  It was followed by a slew of copycat publications: The Illustrated London News, The News of the World, The Weekly Police Gazette. This was birth of our appetite for crime fiction and non-fiction, and the beginning of the British tabloid.

In researching The Printer’s Coffin, I became fascinated by the papers’ lurid descriptions of murders, by the brash energetic newspapermen who invented them, and the angry campaigners who had fought so hard for press freedom and democracy only to see their efforts frustrated. So I set out to come up with a series of murders worthy of a penny dreadful, to make them as gripping and entertaining as a scandal sheet, but at the same time to evoke a world around them of impoverished printers, passionate radicals and entrepreneurial newspapermen, worthy of the real people who brought them into existence. 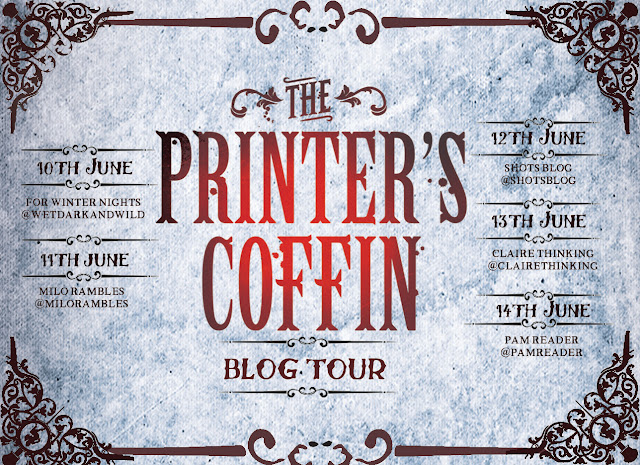