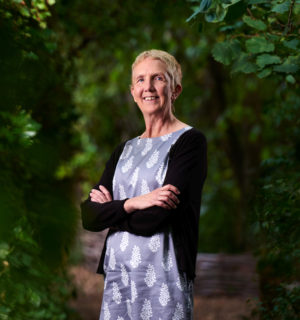 The Crime Writers’ Association (CWA) is delighted to announce that Ann Cleeves is to receive the CWA Diamond Dagger, the highest honour in British crime writing. The Dagger award recognises authors whose crime writing careers have been marked by sustained excellence, and who have made a significant contribution to the genre.

Martin Edwards, Chair of the CWA, said: ‘Ann Cleeves is internationally renowned as the author of the series on which the very popular TV programmes Vera and Shetland are based. But long before her television success, she worked hard writing hugely enjoyable crime novels and short stories. As well as publishing thirty books, she has been a passionate and effective advocate for libraries, while her generosity towards fellow crime writers as well as readers means that this news is sure to be widely welcomed.’

Ann Cleeves said: ‘It’s a huge honour to be recognized by my peers, the crime-writers whose books, friendship and support I’ve enjoyed for more than thirty years. I am privileged to have had such a happy career and I will always be grateful for the support of booksellers and forever indebted to the passion and expertise of librarians, without whom I wouldn’t still be writing today.’

A Sunday Times bestseller, Ann has written 30 novels and is translated into as many languages. Before her writing career took off, Ann worked as a probation officer, bird observatory cook and auxiliary coastguard. In 2015, Ann chaired the Theakstons Old Peculier Crime Writing Festival, during which Vera was voted the UK’s favourite fictional detective. Also in 2015, Thin Air was nominated for the Scottish Crime Novel of the Year and Ann was shortlisted for the CWA Dagger in the Library award. In 2006, Cleeves’ novel, Raven Black, was awarded the Duncan Lawrie Dagger (the prestigious CWA Gold Dagger) for Best Crime Novel, and in 2012, she was inducted into the CWA Crime Thriller Awards Hall of Fame.

As well as fiction, Ann has written a non-fiction title about Shetland and, in November 2015, she hosted the inaugural Shetland Noir festival on the Shetland Islands.

In 2016 Ann was named Queen of Village Noir, which she loved, while The Guardian named her as ‘the best living evoker of landscape’. Ann holds a remarkable record: she is the only living author to have two major drama series on TV.

The CWA Diamond Dagger is selected from nominations provided by CWA members. Nominees have to meet two essential criteria: first, their careers must be marked by sustained excellence, and second, they must have made a significant contribution to crime writing published in the English language. It’s clear that Ann Cleeves meets these criteria in style.
Posted by Ayo Onatade at 13:35