We Got You Covered 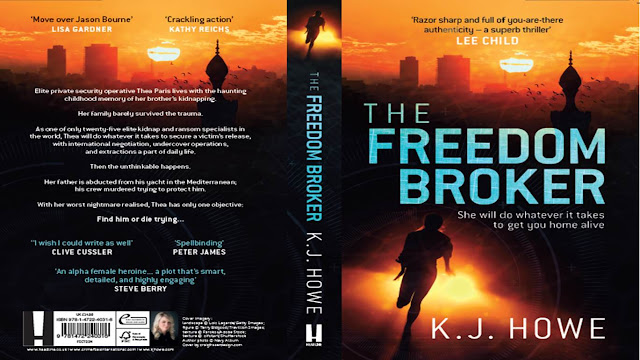 One key aspect of the business of publishing and book-selling; apart from the obvious narrative ability of the writer, the skill of the editorial team, negotiations with retailers, marketing and promotional activity is of course - ‘The Cover’.

I recall speaking with a key Publisher in America, about the importance of ‘The Cover’ – especially related to the intended audience the book is pitched at. I was most interested in the use of focus groups, especially the ‘eye-catch test’, ‘residual memory’, ‘attention triggers’ and much else where book covers / jackets are rated in a scientific manner, and by population demographic, in terms of book-selling efficacy.

I remember discussing the cultural differences of cover design between North America and Great Britain with Tess Gerritsen many years ago. Tess was picked up by Selina Walker, of Transworld / Random House UK many years ago when she changed the direction of her fiction to the Crime-Thriller Genre. Her breakout novel in Great Britain was ‘The Surgeon’, and at the time of UK release she was surprised at Transworld’s intended cover design, which was minimalist in terms of motif, when contrasted to the more specific, and direct imagery of the original US cover. 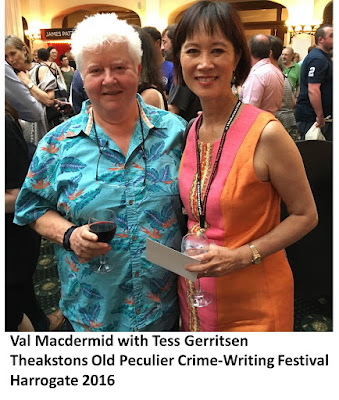 AK: I’m very interested in the differences between the covers of your U.S. editions and of those published in the UK. I find the ones produced by British publisher Transworld to be much more interesting.

TG: I love my UK covers. They are stark and clean and very distinctive. … I would go as far as to say that [Transworld’s jackets] were revolutionary in their design. I don’t think anyone else was making such minimalist imagery work in the crime-fiction world. As it turned out, it was those covers that really caught people’s eyes …

AK: For instance, the UK cover for The Surgeon is very minimal--just a white sink basin with three drops of blood--whereas your American cover for that same book is far busier and more colorful. What’s your take on cover design?

TG: I think [the differences are] cultural. Americans like more color. We like a lot of sex on our covers--the female form, faces. A lot of this has to do with the art director at the publishing house and their taste; and to be honest I don’t really know what makes a cover work or not work. So I leave it to my publisher. I don’t want to second guess them, as they are usually right. 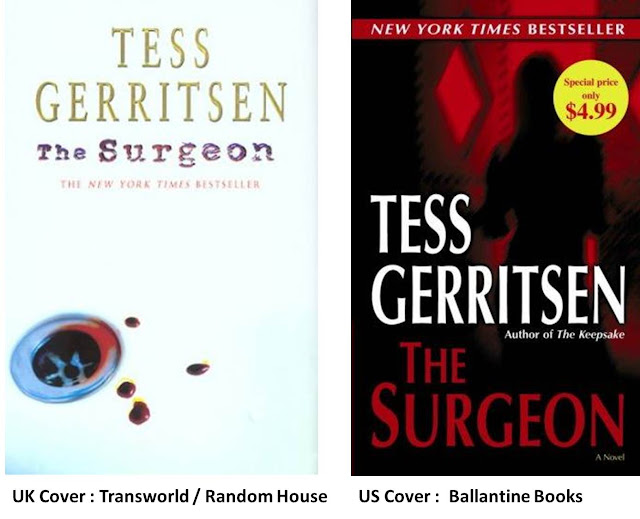 As a scientist, I often consider the book ‘cover / jacket’ akin to the box that Erwin Schrödinger once placed his cat into with his renowned quantum-mechanical thought experiment. One does not know the condition of the cat, unless the box is opened and the cat observed; analogously, a novel can only be understood when the book cover is opened, and the narrative read. Before the observation of the cat, or the book being read, all we can go on is the external state of the box Schrödinger placed his cat in; or when considering the quality of a novel, all we have before we actually read the work, is the cover and the views of others [reviews], in the ‘blurb’, the back cover synopsis and of course the cover.

The art of observation when it comes to Schrödinger and his ‘cat in the box’ is vital as we will only know whether the animal is alive or dead when we look inside [i.e. observation / measurement]; while the quality of a novel can only be ascertained by reading by one, or of many people; and the aggregation of opinion.

Before the observation [or the reading], a novel is just a series of words laid between paper covers, or trapped within a digital device. So until then; we have the cover as a guide to manage our expectations [judging a book by its cover] of what lies within.

These thoughts came to me when I was recently sent the cover from Headline Publishing’s art department for a highly anticipated debut thriller [entitled ‘The Freedom Broker’]. The reason for my interest is that like, Tess Gerritsen’s The Surgeon; the US cover diverges from the UK cover considerably, both in terms of style and imagery. I was also intrigued by this debut as I have known the writer, Kimberly Howe for many, many years. We first met a decade ago via International Thriller Writers first convention Thrillerfest 2006, held in Phoenix Arizona. Both of us were / are avid readers of thriller novels, and we both write. Since then Kim has become Executive Director at International Thriller Writers annual Thrillerfest, but all the while she has been writing away as well as gaining a Masters in Writing Popular Fiction from Seton Hill University. She also won several writing awards, including three Daphne du Maurier Awards for Excellence in Mystery and Suspense. 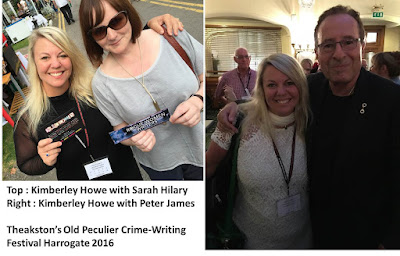 Kim recently asked me to guest blog at the resource Rogue Women Writers; which I did as I enjoy talking [often at length] about Thriller Fiction [as anyone who has met me in a bar will confirm]. My theme was ‘The Lone Wolf’ as a Protagonist as well as an Antagonist.

The article can be read here.

Last year when I attended Theakston’s Old Peculier Crime-Writing Festival, I was delighted to hear that Kim’s debut thriller novel ‘The Freedom Broker’ had been picked up by Quercus in the US and Headline Publishing in the UK.

So what is ‘The Freedom Broker’ all about?

There are twenty-five elite kidnap and ransom (K&R) specialists in the world. Only one is a woman: Thea Paris. And she's the best in the business.

Twenty years ago, a terrified young boy was abducted in the middle of the night by masked intruders while his sister watched, paralyzed with fear. Returned after a harrowing nine months with his captors, Thea's brother has never been the same.

This life-shattering experience drove Thea to become what she is today: a world-class freedom broker. Most hostage-recovery work is done at the negotiation table, but when diplomacy fails, Thea leads Quantum Security International's black-ops team on highly sensitive rescue missions to political hot spots around the globe.

Her childhood nightmare resurfaces when her oil magnate father, Christos Paris, is snatched from his yacht off Santorini on his sixtieth birthday, days away from the biggest deal of his career. The brutal kidnappers left the entire crew slaughtered in their wake, but strangely, there are no ransom demands, no political appeals, no prisoner release requests-just obscure and foreboding texts written in Latin sent from burner phones.

Knowing the survival window for kidnap victims is small, Thea throws herself into the most urgent and challenging rescue mission of her life-but will she be able to prevent this kidnapping from destroying her family for good?

Kirkus, one of the publishing industry’s most respected advanced reviewing sites gave it an enthusiastic thumb-up; so word of mouth started to travel across the Atlantic - well it is an International Thriller.

A fast-moving thriller featuring kidnapped oil tycoon Christos Paris and his kidnap-negotiator daughter, Thea. She’s tough. She’s smart. She’s diabetic.
Greek mogul Christos is snatched from his yacht, The Aphrodite, on Christmas Day, his name day, and his crew lies dead in pools of blood. Luckily, Thea’s job at London-based Quantum International Security (QSI) is hostage rescue. She's a woman of “pure steel” in an “action-oriented domain.” American Special Agent Gabrielle Farrah gets involved, because the Christos name is “synonymous with the oil that fueled America.” There are no ransom demands, only cryptic messages in Latin.
……..But the best scene—and who cares if it’s plausible—involves bungee jumping over the Zambezi River. It’s worth the price of the book.
A spectacular start for what promises be a great Thea Paris series.
Read the full Review Here
I was amused to see the variation in terms of cover theme from these two publishing houses, separated by the Atlantic Ocean. I was most flattered that Headline Publishing sent me the art proofs for the UK cover, which is featured at the top of this post and is the very first cover reveal of this remarkable debut. 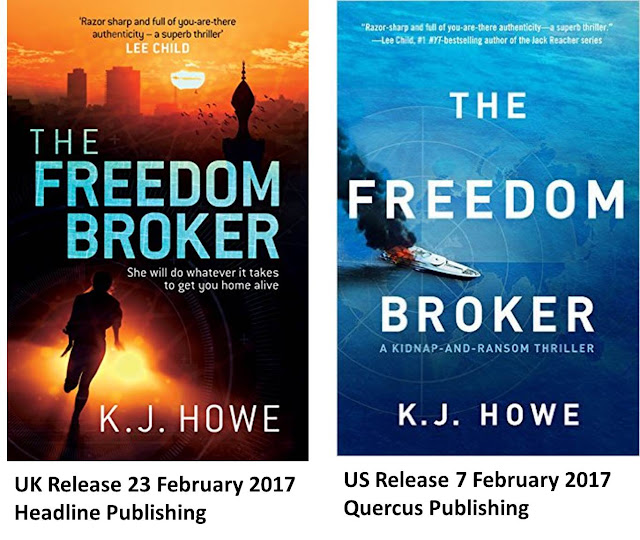 In America, Quercus have gone with the burning Yacht image with its Blue hue, while the British have gone for the running Loner, featuring the Orange of the Sun, as well as a Muzzle–Flash; Orange on Black.

So until February, The Freedom Broker is like Erwin Schrödinger’s cat, hidden in the Box; like Kimberley Howe’s debut novel hidden beneath two differing covers, and waiting to be read.

I would recommend those intrigued, to pre-order which can be done via the Shots Bookstore Here for the UK Headline Edition or Here for the Quercus US Edition; for in February, Kimberley Howe’s Narrative skills can be observed personally, rather than take Kirkus’s word or my own regarding the adrenaline-fuelled, thought-provoking world of The Freedom Broker.

Because when it comes to trouble, Thea Paris has got you covered.