News from Margery Flax of Mystery Writers of America [MWA]

January 19, 2017, New York, NY – Mystery Writers of America is proud to announce, as we celebrate the 208th anniversary of the birth of Edgar Allan Poe, the Nominees for the 2017 Edgar Allan Poe Awards, honoring the best in mystery fiction, non-fiction and television published or produced in 2016. The Edgar® Awards will be presented to the winners at our 71st Gala Banquet, April 27, 2017 at the Grand Hyatt Hotel, New York City.

Congratulations from Shots Magazine to all the Nominees; and thanks for the hard work that the MWA judges put into the Edgar Awards, you are all winners

The EDGAR (and logo) are Registered in the U.S. Patent and Trademark Office by the Mystery Writers of America, Inc.

More Information about the Mystery Writers of America is available from > 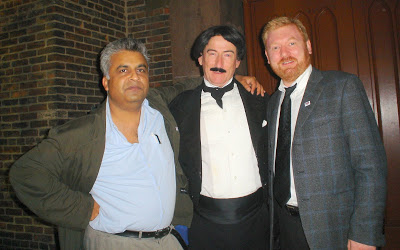 Photo A Karim, Edgar A Poe [lookalike] and R J Ellory taken at Westminster Hall, Baltimore [the last resting place of Edgar A Poe], during Bouchercon Baltimore 2008
Posted by Ali Karim at 15:58