Two into One by R J Bailey

RJ Bailey is the pseudonym of a married writing duo. Their novel Safe From Harm is their first collaborative effort. Here, one half of the pair describes how two into one does go. Mostly. 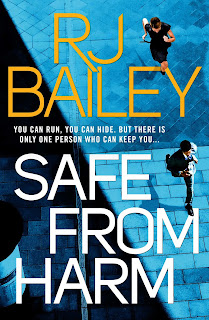 We are far from the first husband and wife team to write a novel together – there’s Nicci French, Lars Kepler, Beth Ann Fennelly/Tom Franklin and there’s even Charles Todd, a mother and son chimera. But I do think we are probably the first ones to do it totally by accident, in that it wasn’t our intention to co-author when we (or rather, I) set out.

I had reached the natural end of a series of historical fiction novels when my wife suggested I write something contemporary. With computers and mobile phones and jet airliners and stuff. I must admit, I’d sometimes hankered after technology to move my narratives along. On the other hand, plotting is so much simpler when you don’t have to worry about your villain being caught on CCTV footage or tracked by satellite. Swings and roundabouts, I suppose.

But what sort of modern thriller? Psychological thrillers are still very much in vogue, but I wasn’t sure I was up to the task of creating a believable domestic noir. Not without booking an Uber to the divorce courts. Then again, the police procedural is also an awfully crowded field, full of skilled practitioners. Besides, did I want to invent a brilliant but flawed detective? I think there’s of them enough out there to do a crime version of Stella Street, where every house in a fictional village contains a maverick cop busy boozing themselves to death while lamenting their father’s dementia, wife/husband’s infidelity, the bastard/ignoramus of a superior officer, their failure to save a colleague, wayward daughter etc. etc. Astonishingly, there are pleasingly fresh examples of the genre that pop up every year. It was just I couldn’t think of anything that hadn’t been done – better – before.

And then, my wife, bored with the sound of my hand-wringing and teeth-gnashing, walked into my office with a printout of an advertisement she had found on Gumtree.

“We are looking for an experienced female CPO/PPO/Driver OR an experienced Driver with a knowledge of security for our clients in Westminster. (The candidate gender restriction is due to cultural reasons.) You will be driving the new Rolls Royce Ghost and MUST have previous experience driving luxury cars.  SIA accreditation essential.  You will be driving a young family with three children who are all schooled in London.  Your contracted hours are Monday-Friday 0730-1800 during school term times, with alternate weekends (flexibility essential).  2-3 months during the summer may be spent in Monte Carlo with possible short trips in the winter months to St Moritz.   To apply for this role you must have a London base and be flexible to adapt to the family and their needs.”

And there, straight away, was a plot. Or, at least, the jumping off point for a plot. And it was an area I hadn’t much read about in novels – a PPO/CPO is a Personal or Close Protection Officer, i.e. bodyguard. And it hadn’t occurred to me that someone might specify a female as a minder. Why? Well, as one of the characters in the book says:

”Look, all over London there are oligarchs and potentates with wives they don’t want to leave alone with a man, certainly not a young, well-built guy who works out and looks after himself. Maybe they’ve seen The Bodyguard musical. Maybe it’s a cultural thing. Sometimes it’s jealous Russians with a beautiful wife who they know didn’t marry them for their good looks and the size of their dicks. Sometimes it’s a Saudi prince who doesn’t want any man with his wife and daughters. Maybe it’s someone who appreciates there are situations where a woman is worth two men. And there are even some male clients who prefer women PPOs. You tend to be much less conspicuous than some bull-necked thug. Frankly, I don’t care what the reason is. Right now female PPOs are a licence to print money.”

All of which is true. Of course, there was one drawback - I knew nothing about the body-guarding business. But, as always, the next best thing to knowing yourself is to find someone who does know and interview them. So we tracked down a young (early 30s) PPO called Lisa Baldwin, based in Dublin, who was willing to walk us through the main points of The Circuit (as they call it) and discuss her backstory and her take on the industry. It was gold dust. Our job then was to smelt it into something we could use.

Which is when I decided two things. One, the novel had to be written first person female to give it an immediacy. And two, my wife would have to come on board as a co-writer/editor/advisor. Because she’s a woman. And I’m not.

I know, I’ve written about serial killers, spies and Antarctic explorers before and I’m not one of those either, but I really wanted the female-in-a-man’s-world side to ring true. I could manage the action scenes and plotting, my wife, though, would breathe life into the character. For example, it was she who insisted the PPO have a daughter to worry about (“Think of her as Modesty Blaise with childcare issues,” she said). She advised on when the hero would or would not be wearing matching underwear and how to relieve cystitis (I never envisioned I’d write a book where a urinary infection was a major plot point).

We did not write together in the same room, nor pen alternate chapters. I would write the scene, she would make suggests or improvements, I would modify or argue the point. I won some, lost others. I originally wanted the character to be anonymous, as Len Deighton’s spy is in The Ipcress File, Funeral in Berlin etc. (he only became Harry Palmer for the movies), but was overruled. That’s why you don’t discover the PPO’s name until the penultimate line of the book – my version of sulking.

When I had a first draft, I handed it over for a detailed critique. There was a little booby trap in there. Chapter Seventeen just said: “This is the sex scene. There is only one in the book. Make it a good one”.

So if we are up for the Bad Sex award next year, you know who to blame.

Did it work? When we sent a ‘partial’, i.e. an incomplete manuscript, to a publisher, they tested it out around the office and seven out ten readers thought the author was a woman. Close enough for jazz. The same publisher bought the completed version. The pseudonym was simply to distance this new series from my historical novels and to recognise that there were (metaphorically) four hands on the keyboard (although why most pseudonyms have to have a “J” in them is a mystery to me).

I wouldn’t recommend this approach to everyone, and there have certainly been some bumps in the road along the way, so fit run-flat tyres to your relationship if you do decide to co-write with your partner, but we think RJ Bailey has some life in him (or her) yet. At least, we’ve finished the sequel.

You try to hide. You try to run. But there is only one person who can keep you… Safe From Harm.

“There is a man coming to hurt us. Probably more than one man. Two or three, perhaps. Not four. They won’t need four to deal with us. After all, we are trapped. There is no way out from this cold, concrete shell. We are crouched in the dark, dozens of feet below ground. The power to this level has been cut. There is no phone signal. Which is mostly irrelevant because I don’t have a phone. But I do have two broken fingers on my left hand and a knife wound to my ribs and the pain is making me sweat.”