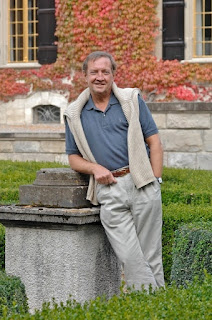 centuries upon its weekly market, the oldest and largest in the region. Its continued success and security were therefore a priority for the local policeman, Bruno Courrèges. He was usually to be seen patrolling the town’s two main squares and the long street that joined them shortly after seven each Tuesday morning when the stalls were being set out.

Bruno always enjoyed watching as the stalls were loaded with cheeses and salamis, fruits and vegetables, ducks and geese, fish, oysters, mushrooms and chickens. Between them were other stalls that measured the changes in French as well as tourist tastes. Only one still offered the traditional aprons and housecoats that once clad the farmers’ wives. But several sold comic T-shirts, miniskirts and the kind of metal-studded high-heeled boots that once were associated with particular tastes. More and more of them offered organic soaps and obscure teas that Bruno had never heard of, hand-carved wooden toys, used books and garish covers for mobile phones.

Bruno knew most of the stallholders well, and his patrol was punctuated by handshakes with the men, and the bise of greeting to women of all ages. And the stallholders usually bent down to stroke Bruno’s basset hound, Balzac, or offer the dog some tiny treat from their stalls. Sometimes in summer when the usual ranks of regulars were swollen by new merchants, there were arguments that Bruno had to manage over whose stall should go where, or challenges to the accuracy of Fat Jeanne’s tape measure. A woman of almost spherical shape with a booming laugh, she even referred to herself by the nickname by which everyone knew her.

Jeanne was la mère du marché, the town employee who collected five euros for each metre of frontage for every stall. She stashed the money in an ancient leather bag that she carried securely across her ample body. One centimetre over the metre was acceptable but anything over two centimetres was not and Jeanne would then demand payment for a second metre. Bruno recalled with a smile one salesman offering discount tools who used one of his own saws to carve off an excess sliver of wood no wider than his finger. Among Bruno’s various duties was to escort Jeanne to the bank just before it closed at noon and deposit the cash in the town’s account. On the busy days of the tourist season she would bank over a thousand euros. In the depths of winter, it fell to two or three hundred.

Bruno kept a watchful eye on Jeanne and her cash and on any strangers around the market. One morning in November he spotted an unfamiliar African youngster loading a trolley from a van he recognized. Bruno stopped, greeted the youth and shook hands.

‘He’s already at the stall,’ came the reply. ‘I’m his nephew, Cali, down here from Paris to learn the market trade.’

‘What are you selling?’

The square metal tins and boxes of small plastic cups were something new. Léopold usually sold cheap T-shirts and sunglasses, leather belts and bolts of African cloth.
‘African coffees and chocolate,’ Cali replied with a friendly smile. ‘It was my idea to try something new. Uncle Léo sells almost nothing this time of year.’

Bruno nodded. Léopold usually stayed until the last market before Christmas and then 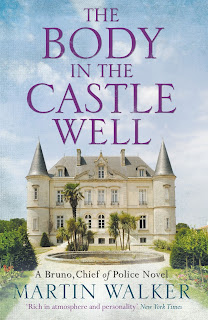 flew home to Senegal for two or three months, visiting family and buying new stock for the next season. Bruno wished the young man luck and walked on to complete his circuit before seeking out Léopold’s stall, where an electric kettle was steaming behind the counter, plugged into one of the sockets that St Denis provided – for an extra fee.

Léopold was an old friend, a regular at the market years before Bruno’s arrival, and he’d once helped Bruno make an arrest during a brief period of trouble between Chinese vendors and the traditional Vietnamese food stalls they were trying to replace. The big Senegalese in his flowing robes opened his arms to hug Bruno and the two men brushed cheeks. Bruno could see that several tins of coffee plus three cafetières, plastic cups and sachets of sugar now took up a third of Léopold’s two-metre-wide stall. The tins carried labels to show the coffee inside came from all over Africa: Kenya, Tanzania, Rwanda, Ivory Coast, Cameroon and Ghana. Against each tin stood a block of dark chocolate from that country. A hand-lettered sign announced that the coffee was one euro a cup, which was cheaper than the one euro thirty cents most cafés now charged.

‘None of your coffee comes from Senegal,’ said Bruno.

‘People have just started growing it there and I hope we’ll have some next month,’ said Léopold.

‘Try a cup of one of the other brands.’

Bruno chose the Ivory Coast, since he’d been stationed there for several months while in the French army. He still remembered the taste of the coarse local coffee, the robusta version that he and most French people had grown up drinking before the finer arabica coffee began to take over the market.

‘On the house,’ said Cali, who had joined them.

Bruno grinned and shook his head, placing a single euro coin on one of the tins. ‘You know you have to give Jeanne an extra two euros if you’re using electricity,’ he said. ‘

‘And what do you do for water?’

Cali pointed to a large plastic bidon holding twenty litres that was stashed behind the stall. ‘And I’ll rinse out the cafetières at the public fountain. We have it all planned out.’

The complete Bruno and the Chocolate War story can be read here.
Posted by Ayo Onatade at 06:00